When compiling my list of the Top 100 Pro Football Books of All-Time I had just a few criteria that I kept to. Of course the book had to mainly be about pro football, so sorry no Friday Night Lights. I also took consideration the research, the writing, the historical impact of the book, and if you should permanently own it in your football library. All 100 books here met these criteria. Over the next five days Pro Football Journal will count them down. Here is the 5th and last part of the countdown. Here are numbers 20-1.

20) Native American Son: The Life and Sporting Legend of Jim Thorpe by Kate Buford (Knopf, 2010) The single best volume written about Jim Thorpe. Beautifully written and well-research Native American Son is the definitive biography on the man who brought pro football to the mainstream. This is another book that once I started reading it, I couldn't put it down. Only one other football biography is higher on the list. 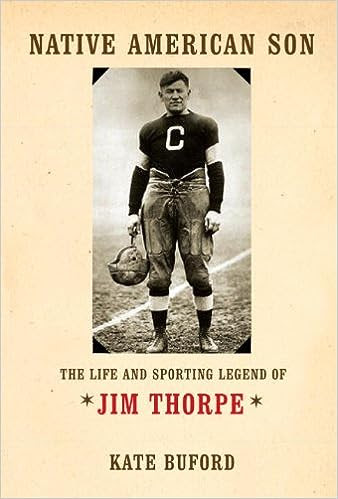 19) When the Colts Belonged to Baltimore: A Father and a Son, a Team and a Time by William Gildea (Houghton-Mifflin, 1994) Similar to John Eisenberg's Cotton Bowl Days, When the Colts Belonged to Baltimore by William Gildea, sportswriter for the Washington Post, writes a moving memoir of his childhood in Baltimore and his connection with the Colts. Focused around his relationship with his father and their shared love for the Colts, Gildea writes with heart about a kid's and a town's love for their football team. Gildea fills his memoir with memories of his favorite team and interviews with all the key coaches and players of the Colts' golden era of the 1950's and 1960's.

18) Pigskin: The Early Years of Pro Football by Robert W. Peterson (Oxford University Press, 1997) Former magazine editor and author of Only the Ball Was White, about the segregated Negro Leagues, Robert Peterson does a yeoman's job covering the early history of pro football in a lively and easy-to-read manner. Roughly 200-pages long, if you want a short, concise book on the early Pigskin is the book for you.

17) Finding the Winning Edge by Bill Walsh with Brian Billick and James Peterson (Sports Publishing, Inc., 1997) Published in 1997 Finding the Winning Edge is the ultimate coaches "textbook" on how to run a football team. Written by former 49ers head coach Bill Walsh, with the help of Brian Billick and James Peterson, the 550-page bible wasn't that big of a best-seller when it was published. But since '97 the book has taken on a life of its own among football coaches of all levels and front office executives. A one-of-kind book that only the Genius could have pulled off. 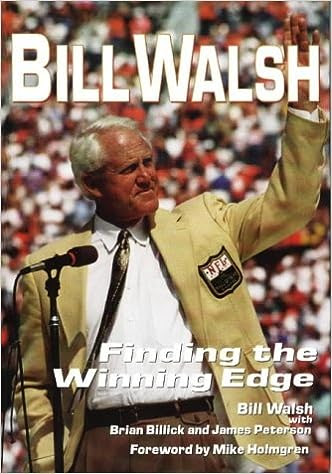 16) Pro Football's Rag Days Bob Curran (Bonanza Books, 1969) In 1966 Lawrence Ritter traveled the country to interview some of baseball's early stars and wrote the best sports oral history book titled The Glory of Their Times. Three years Curran, columnist the Buffalo Evening News (and author of The $400,000 Quarterback, # 61 on ) did the same thing for pro football. He interviewed 15 of the game's early stars, as well as owners such as Jack Cusack, Benny Friedman, Dutch Clark, Ken Strong, Sid Luckman and Byron "Whizzer" White. Pro Football's Rag Days takes readers back to a time when the game was played on dirt fields by men who played with no helmet for just a few dollars. 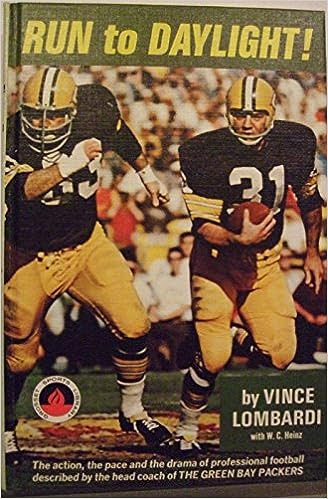 14) The Pros: A Documentary of Professional Football in America by Robert Riger with commentary by Tex Maule (Simon & Shuster, 1960) The Pros the photography and artwork of Robert Riger, probably the greatest football artists of all-time. Published in 1960 The Pros readers how the pro game was played through Riger's photos and text by Tex Maule, Sports Illustrated's lead pro football writer. intimate photos give readers an insider's view of the NFL, especially in the years covering 1958-1959, when most of the photos were shot. When it was released the book came with a slipcase that you don't find often today. 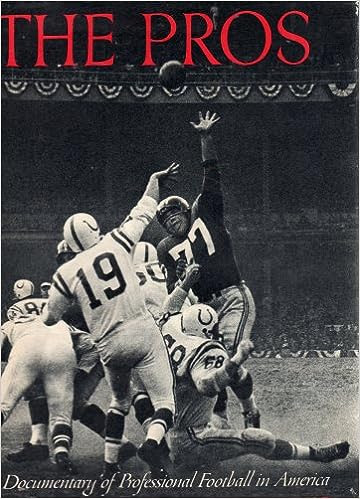 13) Pro Football: It's Ups and Downs, A Light-hearted History of the Post Graduate Game by Dr. Harry A. March (J.B. ., 1934) The first ever book written about pro football was authored by Dr. Harry March, a former Ohio doctor who was the team physician of the old Canton Bulldogs and who also became a team executive for the New York Giants when they were founded in 1925. While associated with the NFL he wrote Pro Football: Its Ups and Downs. Printed by the J.B. Lyon Company of Albany, New York the book contained 160 pages and 42 photos on the history of the sport, beginning with the "Birth of Pro Football in Western Pennsylvania" and concluding with the 1933 NFL season. The book came out in limited release for seventy-five cents in leather and one dollar in binding and was sold at the ticket offices of the New York Giants and Brooklyn Dodgers. The book was also advertised in Giants programs as a favor by his good friend Tim Mara. Even NFL President Joe Carr bought 100 copies to send out at his discretion. As the years passed March’s book became a staple for sportswriters and authors who took it as gospel. March mainly wrote from memory and never bothered to do any actual research. In the end his book should be taken for what it’s really worth – “a light-hearted history of the post-graduate game.”

12) Total Football and Total Football II (Turner Books, 1997/Harper-Collins, 1998) No football fan, writer or historian can have a football library without having a copy of Total Football in it. The precursor to popular websites of as profootballreference.com the Official Encyclopedia of the NFL was first released in 1997 behind the guidance of some of the top pro football historians that have ever lived. Bob Carroll, David Neft, John Thorn and Michael Gershman (as well as the group at Elias Sports Bureau) put together decades of research into one big encyclopedia. The best book for a road trip, you can find anything and everything about the history of the NFL and its players in this book. 11) The Hidden Game of Football by Bob Carroll, Pete Palmer and John Thorn (Warner Books, 1988) Nearly a decade before Total Football the trio Pete Palmer and John Thorn wrote The Hidden Game of Football. This cult favorite is the football book equivalent to Bill James's books on baseball, taking the reader into a new arena of looking at the game. The Hidden Game revealed new methods of looking at statistics, giving the reader a better understanding of how the game was played on the field. 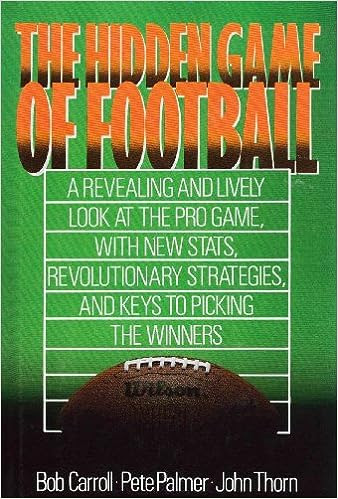 10) The Game That Was by Myron Cope (The World Publishing Company, 1970). One year after the release of Pro Football's Rag Days, author Myron Cope (his second book on the list after Off My Chest, # 52) delivers The Game That Was, an oral history of early pro football. Cope interviews the key players of the early days of the NFL including Red Grange, Johnny Blood, George Halas, and Dutch Clark. But Cope interviews a few newer subjects that played in the 1940's like Marion Motley, Bill Willis and Bobby Layne. But two of are with Joe Guyon and Bulldog Turner. Nothing beats a great oral history book with great stories.

9) When The Grass Was Real: The Ten Best Years of Pro Football by Bob Carroll (Simon & Schuster, 1993). Written in 1993 by Bob Carroll, the founder of the Professional Football Researchers Association (PFRA) and arguably the best football historian that ever lived, When The Grass Was Real takes us back to one of the sport's greatest decades- the 1960's. According to Carroll, that decade was the best ten years of football and takes the reader back to the AFL-NFL war and a game that "celebrated the days of mud, sweat, and cheers." Told in Carroll's own unique way and loaded with over a hundred photos and illustrations (by Carroll himself) one can't put this book down once they have started reading.

8) The Golden Age of Pro Football: A Remembrance of Pro Football in the 1950's by Mickey Herskowitz (MacMillan, 1974) What Carroll did the 1960's with When the Grass Was Real, long-time Houston sportswriter of the Chronicle and Post, Mickey Herskowitz did for the Fabulous Fifties. Published in 1974 with the cooperation of NFL PropertiesThe Golden Age of Pro Football is cover-to-cover "a celebration of the fifties, and the men who made pro football a national experience." Herskowitz lays out chapters of every team, every position on the field and anecdotes on pop culture (Music, Politics, Television, Literature, Fads) that vividly brings the Fifties to life. 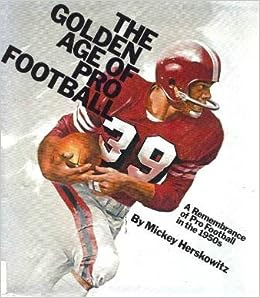 7) ! Football When Men Were Really Men by Art Donovan (William Morrow & Co., 1987) One of the all-time funniest sports autobiographies of all-time (not just football). Written with the help of Bob Drury, a sportswriter for the New York Post and Newsday, former Colts defensive tackle Art Donovan became an instant legend with Fatso! So many funny stories and heart-felt yarns, Donovan's autobiography is truly a classic. 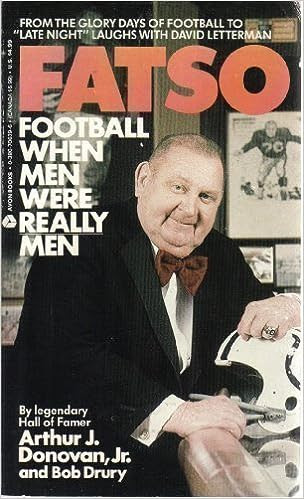 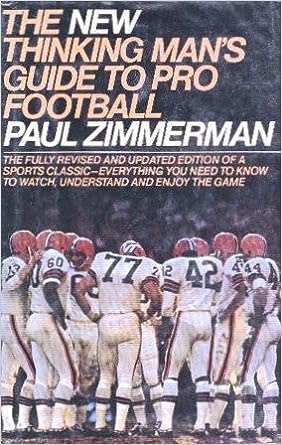 5) Halas by Halas: The Autobiography of George Halas by George Halas with Gwen Morgan and Arthur Veysey (McGraw-Hill, 1979) The highest autobiography on the list goes to only one man- George Halas. One of the original founders of the NFL Halas finally got around to writing his story, with the help of long-time newspaper and of Gwen Morgan and Arthur Veysey, at the age of 84. Published in 1979 Halas by Halas tells the incredible story of the man who helped build the NFL for nearly seven decades. story is THE story of the NFL.

4) When Pride Still Mattered: A Life of Vince Lombardi by David Maraniss (Simon & Schuster, 2000) The best football biography ever written to date. David Maraniss's masterpiece Vince Lombardi is a must-read for any football fan. I thought I knew a lot about Lombardi, but when I finished When Pride Still Mattered I finally had a complete picture of who he was. 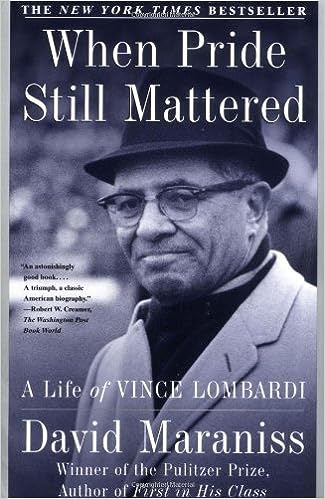 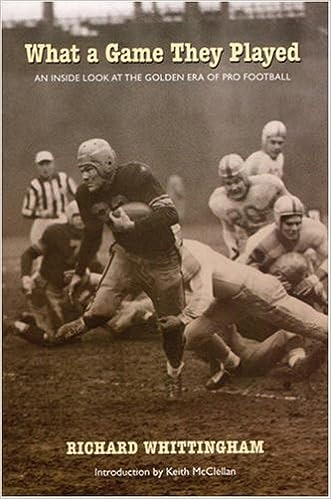 2) The Pro Football Chronicle: The Complete ( Record of the Best Players, the Greatest Photos, the Hardest Hits, the Biggest Scandals by Dan Daly and Bob O'Donnell (MacMillan Publishing Company, 1990) Written by Dan Daly and Bob O'Donnell of the Washington Times, The Pro Football Chronicle is 358 pages of pure football magic. If you love lists, anecdotes, scandals, odds-and-ends, as well as the accurate truth than The Pro Football Chronicle won't disappoint. Organized by decades from the 1920's through the 1980's, Daly's and O'Donnell's research is second to none. They dug deep to find stories (as well as some unbelievable photos) that had not been written about before or dug up new facts to de-bunk popular myths.

1) America's Game: The Epic Story of How Pro Football Captured a Nation by Michael MacCambridge (Random House, 2004) Written in 2004 America's Game by Michael MacCambridge is quite simply the top pro football book of all-time. Beautifully written and well researched MacCambridge tells the unique story of how the NFL, starting with state of the NFL during World War II and the 1958 NFL Championship Game, went on to dethroned baseball as the country's favorite sport. T the game's  transformation through six key - the Browns, Chiefs, Colts, Cowboys, Raiders and Rams- MacCambridge reveals how the team's fortunes helped the greater growth of the league. Along the way MacCambridge tells the stories of the men who made the league what it is today since World War II- Pete Rozelle, George Halas, Bert Bell, Tex Schramm and Lamar Hunt. A very entertaining and important piece of work that shows why the NFL and pro football is the cultural phenomenon it is. 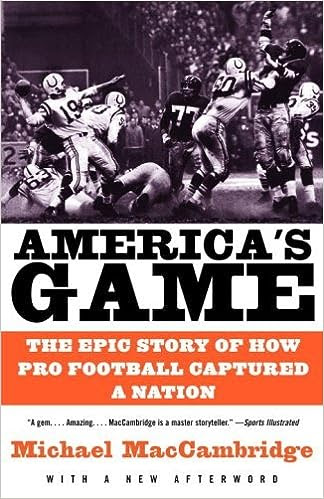