A Number That’s Hard to Believe 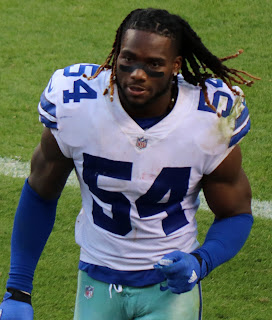 Jaylon Smith, the Cowboys’ trending Linebacker, yesterday notched the only sack of the game for America’s Team. On the last play of the half as Deshaun Watson broke out to the right the speedy Smith tracked him down and knocked him out of bounds for a one-yard loss, effectively ending the scoring threat for the Texans, a great play, and one of the best defensive plays you’ll see.

Now, nobody could hold it against you for asking whether this should have been called a sack or a stuff, I am personally not sure Watson ever planned to throw the ball on this play. But it was the icing on the cake for Smith getting credit for short sacks.

Given that most sacks fall in the 5 to10-yard range what are the odds of having 3 sacks for just one-yard loss?  The numbers say that this should happen once for every 9,798 times that a player has three sacks, ok, ok, maybe it’s not one in a million, but one in 10 thousand isn’t bad. Let’s watch what happens next, another 0 or 1 yarder and he’ll be one in 200,000.