Packers Motor to Yards in Loss at Detroit 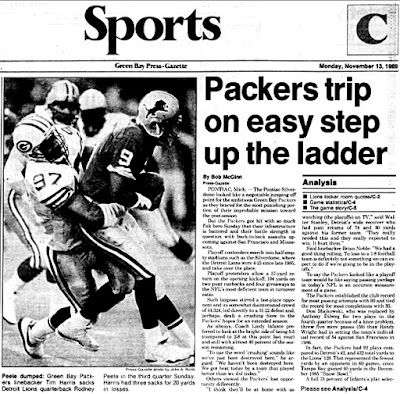 Producing loads of yards doesn’t guarantee a windfall of points.

The Packers collected nearly twice the yardage of the Lions Sunday at Ford Field. That achievement didn’t register on the scoreboard as , which led almost the entire game, dismissed 31-23.

Gaining yards has not been a problem for Packers quarterback Aaron Rodgers and his teammates in recent weeks. What has been lacking is a commensurate number of points to go along with the considerable distance the offense has traveled.

Against the Bills, the Packers rang up 423 yards and settled for 22 points. That’s nearly 10 less than the team has averaged in the past (31.87) when accumulating 400 or more yards.

For the Packers, that’s a lot of verbiage and not enough meaningful sentences.

Davante Adams, his favorite target, grabbed nine throws for 140 yards. Rookies Marques Valdes-Scantling and Equanimeous St. Brown (the Packers were without veterans Randall Cobb and Geronimo Allison) came away with another 10 for 157.

The ground game, paced by Aaron Jones and Jamaal Williams, accounted for 98 yards on 20 carries. Not the biggest haul, but the group averaged nearly five yards a pop.

New math or old, the Packers outgained the Lions by 257 yards. Only once before has the team produced a greater margin and lost, and was responsible for that setback as well.

Eight of the Packers’ 11 drives stretched for six or more plays and covered at least 40 yards. Each of those eight advances produced a minimum of two first downs.

Yet half of those eight possessions failed to yield points as Mason Crosby misfired on four field goal attempts. He missed from 41 (wide left), 42 (hit right upright), 38 (wide right) and from 56 (wide right).

It would be easy to pin this loss on . After all, not since Don Chandler went 0-for-4 against in 1967 has a Packers kicker missed four field goals in one game.

But let’s take a look at the four third-down plays that preceded ’s misses. Better yet, let’s examine the last three plays that occurred on each of those four drives.

Two were running plays. Jones gained three yards on one first down, and Williams got five on another.

That leaves 10 plays, all of which were passes. On those dropbacks, Rodgers went 0-for-10.

Four were throwaways due to pressure from the Lions. Two were thrown too far. And on one, tight end Jimmy Graham couldn’t adjust to the ball in the end zone.

The other three occurred on the same drive late in the fourth quarter. failed to complete what would have been a circus catch inside the five. Ty Montgomery dropped a screen pass with guard Lane Taylor and center Corey Linsley at the ready in front of him. And linebacker Jarrad Davis hit Rodgers on the third to create a wobbler that a diving Graham couldn’t reach before the ball hit the turf.

That’s a grand total of eight yards on 12 plays. Clearly, wasn’t the only one not getting the job done.

Sunday was the 96th time the Packers have outgained an opponent by 200 or more yards in a regular-season game. The team’s record in those contests in 86-8-2 (.906).

Having to play catch up in didn’t help. piled up the majority of its yards (320) and all its points against the Lions after falling behind by 24 late in the second quarter.

Rodgers launched 33 passes in the third and fourth quarters combined. He is 0-11 in the regular season when forced to attempt 28 or more second-half throws.

Small consolation, then, that he became the first player in team annals to throw for 300 yards (301) in the second half of a game.

Don Majkowski is one former player who could commiserate with Rodgers. On Nov. 12, 1989, the Majik Man threw 35 times in the second half as sought to catch the Lions in the Silverdome.

Despite the flurry of activity, the Packers came up short, 31-22. They did, however, outgain the Lions by 304 yards, the greatest difference in Green Bay's favor in any loss in team history.

has now outgained its opponents by more than 200 yards in consecutive weeks for the first time since 2012. But unlike six years ago when the team won both times – Bears (21-13) and Titans (55-7) –  (2-2-1) settled for a split with the Bills and Lions underscoring just how inconsistent this team can be.

In so many words, this up-and-down, back-and-forth nature has been the Packers’ story through five weeks. If unchecked, it has the potential to impose a sentence of mediocrity on the 2018 edition of this team.

Extra points
has outgained the Lions by 200 or more yards 10 times in the regular season, a record for one opponent. In a tie for second place are the Bears and Vikings (eight apiece).

Real Estate Foldings
The eight regular-season games in which outgained its opponent by 200 or more yards and lost.