By Nick Webster
Earlier this week ESPN.com’s Bill Barnwell named his award winners at the quarter-pole of the season, at Defensive Player of the Year he named in order Khalil Mack, Demarcus Lawrence, and J.J. Watt. We might quibble a bit about the order – between 2 and 3, not 1—but there’s no question that these three are off to a very special start to the season. Indeed, this site’s own John Turney selected Khalil Mack as his pre-season Defensive Player of the Year prediction, while yours truly was way off, placing him second.
Mack and Watt have separated themselves in a very unique way.  Over the past 25 years, 1993 to date, Mack and Watt are the only two defenders ever to force 4 fumbles through the first 4 games of the season. Mack, amazingly, has forced one in each of the first four games, each on strip-sacks. Watt, on the other hand, forced one each in the second and third game and 2 this past weekend against the Colts. At this pace, both Watt and Mack would set a record for the known forced fumbles in a single season.
A little bit on what we know about forced fumbles, from around 1993 to date NFL defensive stats while not official, have been consistently compiled and reported in play-by-plays by the press-box crew doing the home games.

Think of this as the “Unofficial-Official” era. From circa 1975-1980 to date teams consistently reported on the number of fumbles their defenders forced in Media Guides, I think of this as the “Team-Official” era as the numbers were kept fairly consistently across teams, unlike tackles where clearly teams used very different criteria, forcing a fumble is a very discrete event that can either be known to have happened or not—little left in doubt.

Prior to this is the “Unofficial Play-by-Play” era, where largely the only way to gather the number is from play-by-play accounts of the games, of course, prior to 1975 play-by-plays so varied in quality that many many fumbles went without ever recoding who caused the fumble.
What do we know?  We know that in the “Unofficial-Official” era no player has ever had 4 FF’s through 4 weeks, which both J.J. and Khalil have equaled in 2018. We know that the most FF’s in a single season over that timeframe is 10, shared by Jason Taylor in 2006, Osi Umenyiora in 2010 and Peanut Tillman in 2012 (more on that later).  At this pace, both J.J. and Khalil would exceed those leaders and set a new single-season standard.

So what does this portend for Mack and Watt, we’ll have to wait and see.  In all likelihood teams will adapt, but it’s not like Mack and Watt being dominating defenders came out of the blue, maybe they’ll be double teamed even more often, or triple teamed.  It is possible that what we’re seeing is part of a trend, given the new rules regarding landing on a passer during a sack, Von Miller stated that he’s just going to “go for the ball”, maybe, in a backwards way, this rule will hurt offenses as more sacks will lead to forced fumbles.

So what of the previous era’s, the information we do have suggests that the recent emphasis on creating turnovers has actually increased the prevalence of forced fumbles.  The numbers from the “Team-Official” era are very reliable yet the highest figures observed in a single season are consistently in the 7 to 8 range.

Keep in mind before LT, with Derrick Thomas later taking it to another level, the goal of sacking the QB was just that. LT began “tomahawking” the ball from QB’s hands in the late 80’s and only after Derrick Thomas forced 8 fumbles in 1992 with the technique did it truly becomes a point of emphasis.
In the “Unofficial Play-by-Play” era the data is just too sparse to tell. You’ll hear statements like, “If they’d have kept track of forced fumbles when Dick Butkus played, he'd be the all-time leader.”  It’s true he was a hard hitter, and probably forced more fumbles than any other linebacker of his era, but his top season in that category was his rookie year where he had either 6 or 8 forced, depending on which numbers you trust, by the 70’s he was in the low single-digits, with around 3 per season.


So we may be entering a golden age of forced fumbles, Mack and Watt are truly off to a terrific start and each could be on his way to a historic season.  So who’s the defensive player of the year at the quarter pole, you decide . .  . 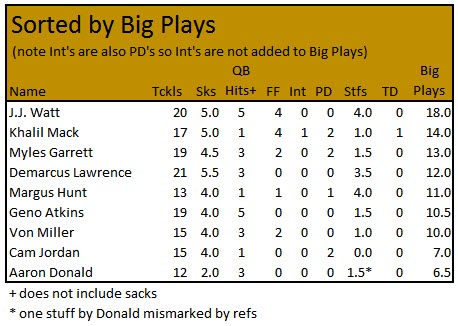