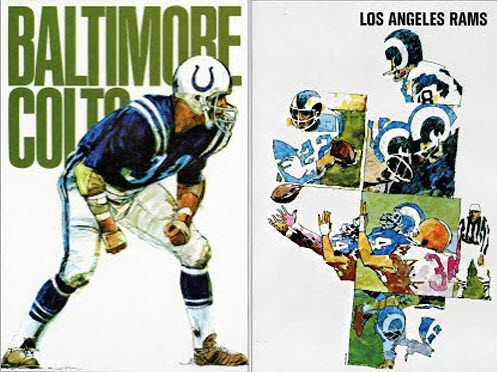 There have been many coaching rivalries in the history of the league, and of course that will continue. One of the best though for a decade involved two young coaches that set their sights on becoming head coaches, and winning a championship.

Before the game of October 27th is covered there is plenty of background that is vital to this saga. Don Shula becomes defensive co-ordinator for the Lions in 1960 after Detroit's disastrous seasons of '58 & '59.

George Allen was brought to Chicago to work in player personnel in October of '58. Though Clark Shaughnessy would never want anyone attempting to help him coach the Bears defense, Papa Bear Halas has decided in 1960 that Allen should work with the defensive backs besides continuing to upgrade the talent in Chicago.

The first time they are on opposing sidelines is November 20th, 1960 and the Bears pass rush has a tremendous game in defeating Detroit. The Bears falter late in the season, and Shula helps guide the Lions to the play-off bowl in Miami. Detroit and Chicago again split the series in '61, and both teams believe they can dethrone Green Bay in '62. Allen becomes defensive coordinator sometime in '62 (no one is sure which week), and Chicago plays improved defense yet the Lions defense is the talk of the league after they massacre the Packers on Thanksgiving.

Rumor's abound in Baltimore that Weeb Ewbank will be dismissed and his replacement just might be one of these two firebrands. The last time these two men face each other as coordinators the final score is 3-0. No doubt for these men defense rules. Don Shula gets the job in Baltimore and the '63 Colts play improved football late in the season to post a winning record.

The Colts lose twice to the Allen's defense in '63, but much more important the Bears are able to beat the Lombardi Packers twice in '63 and win the championship. Shula turns the tables in '64 and crushes the Bears twice, and also beats the Lombardi Packers twice to win the division title. Green Bay outlasts Baltimore in overtime to end the Colts season in '65, and though the Bears rally after an 0-3 start both men again are back to watching Green Bay play for a title. Shula vs. Allen 1960-62 is 3 wins and 3 losses.

Shula vs. Allen 1963-65 is 3 wins and 3 losses. George Allen believes he should be named head coach of the Bears right now (Halas kinda promised him the job), but when the Rams come calling Allen quickly accepts the job. After winning a contract battle in court Halas then releases Allen to allow him to take the job. Baltimore beats the Rams in Los Angeles 17-3 in a defensive battle in late October of '66 the first time these men square off as head coaches. Allen has done an admirable job of coaching and reorganizing the woebegone Rams during the '66 campaign and one of the highlights is beating the Shula Colts 23-7 in late November. Again both men watch as Lombardi wins another championship.

The NFL is reconfigured for 1967 into four divisions each with four teams with interesting names for the division. The Rams, Colts, 49ers, and Falcons are in the Coastal division. So, these two men know that to face Lombardi and the Packers for the western conference crown they must beat each other during the season. During the regular season, Shula's Colts and Allen's Rams both beat Lombardi in hard-fought games; but what happens when they play each other?

They tie in October and set the stage for winner take all in the Coliseum the last day of the regular season. Shula and the Colts are beaten badly and though they lose just one game during the year, no play-offs. Allen and the Rams are rewarded with a trip to frozen Wisconsin and a play-off loss to Lombardi in his season of destiny. Lombardi retires from coaching, and both men feel they have the team to win it all in 1968.

Though their personalities are very different, their teams are very much alike. That said, let's take a close look at the teams leading up to October 27th. Los Angeles begins 6-0 and allows just 67 points. The Ram defense is led by left defensive end and league Defensive Player of the Year Deacon Jones (a league-leading 22 sacks, though unofficial). The Ram pass rush leads the league in sacks with 51 (tied with Dallas), so Deacon has plenty of help from his cohorts on the line—especially from All-Pro tackle Merlin Olsen, and a linebacking corps that can either blitz or cover. Maxie Baughan at right linebacker is by far the best "weak side" linebacker in the league in '68.
Allen's forte is his combination coverages and as such the Los Angeles secondary led by All-Pro right safety Eddie Meador leads the league in the defensive passer rating category with a mark of 47.1. Moving the ball consistency in the air against the Rams and Allen is just not going to happen. Allen's defense allows only 3,118 yards all season. The Los Angeles offense is taught to be mistake free by co-ordinator Ted Marchibroda, and be as balanced as possible.
Roman Gabriel is a budding star and though the Rams run the ball over 500 times during the year, they can strike downfield in the passing game with Casey and Snow. Four Ram offensive lineman go to the pro bowl in '68 and allow just 28 sacks during the year. Shula in Baltimore also has an excellent offensive line and they allow only 29 sacks during the year. The key Colt here is Pro Bowl left tackle Bob Vogel. Though Unitas is injured, Shula much like Allen knows he must have a strong back-up quarterback, and the trade for Earl Morrall is a godsend for Baltimore. The poised and accurate passing veteran also realizes that the offense must have balance and they run the ball 463 times.
The Colt pass offense much like the Rams can strike downfield as the trio of Mackey, Richardson, and Orr gain 2,085 yards on their 111 receptions. Don Shula just might have one of the best defensive staff's in league history in '68.
Bill Arnsparger has a defensive line that also has a strong pass rush(45 sacks) as new left defensive end Bubba Smith begins his quest to dethrone Deacon as the best end in the league. Bubba led the Colts in sacks with 10½ and was Second-team All-Pro. Fred Miller while he is not Olsen is a Pro Bowl-caliber player and a stalwart defender at right defensive tackle. By far the best strongside linebacker (almost always on the left) is "Mad Dog" Mike Curtis. Athletic, quick, and superb at shedding blocks he is a a force all season.
The secondary coached by Chuck Noll disguises coverages, and even uses a rudimentary form of cover 2 long before the coverage becomes vogue in the '70's. Baltimore is second in the league in the defensive passer rating category at 47.5. Left corner Bobby Boyd is the best in the league at defending sweeps, and a master at underneath zone coverage and is ably assisted on that side by Jerry Logan.
The key man though is right safety Rick Volk who in just two seasons has learned his lessons well and has fantastic range and big play ability. He may be built different than Meador but boy oh boy they both are superb tacklers, and always where they are suppose to be. Both men become the punt returners for their respective teams since they are sure-handed. The kicking game is almost never mentioned, except of course here. Allen and his Rams work hard in this area and have their moments, yet Shula's Colts are the best at kick-off and punt coverage in the league. Bruce Gossett kicks 17 field goals for the Rams, while Michael's kicks 18 for the Colts. This is becoming eerily similar.

The bible for all football fans in August of each year is Street & Smith's magazine, and Bob Oates states the following about Los Angeles (he picks them 1st):  "(B)ut if the Rams are now coming up, Baltimore now has the strongest team it ever had".

In his write-up for Baltimore who he picks second "the Colts yielded fewer touchdowns than any other team in 1967 and finished second to Los Angeles in points allowed." Ok, the background has been given and the Colts are at home with a record of 5-1 having just been upset by Cleveland. George Allen's Rams in their last eleven road games entering this game is 10-0-1.

Ready? Here we go! Los Angeles scores first on a Gossett 19 yard field goal as the Colts stiffened near the goal line. Baltimore takes the lead when Jerry Hill goes over from the one, and later in the quarter Morrall quarterback sneaks from the one. 13-3 Baltimore after one period. Second quarter and Jimmy Orr catches a deep pass from Morrall for 44 yards and a commanding half-time lead. Baltimore's defense shuts down the Ram running game as Mike Dennis off the bench gains only 33 all day against the Colts. The Colt zone coverages will not let Casey & Snow get open deep as they gain only 37 yards on 3 receptions.

Both teams are known for their excellent half-time adjustments on defense—Baltimore allowed 20 points all season in the 3rd quarter, but 7 of those points come from a Bernie Casey 1-yard touchdown catch. The Rams allowed only 27 points all season, but 7 of those came from tight end Tom Mitchell's back-breaking 41-yard catch and run from Morrall. Neither team scores in the 4th quarter as Baltimore wins a game they must 27-10.

Watching and digesting the highlight film of this game shows that the Colt pass rush was the difference with 5 sacks. Curtis in his famous photo is shown leaping in the air and grabbing Gabriel around the helmet in bringing him down. The four Colt lineman were relentless in coming after Gabriel.
The play though that stands out is Willie Ellison sweeping right and having Curtis strip the ball free. The pigskin bounces up and though Gaubatz grabs at the ball, defensive tackle Fred Miller latches onto it, and runs down the sideline deep into Ram territory to set up one of the early scores. The Baltimore offensive line opens holes all day as Tom Matte gains a season-high 87 yards to keep the chains moving, while Morrall gained 211 yards on his 11 completions. Earl struggled with consistency as he was just 11 of 27 with 3 interceptions in trying to solve the Ram coverages, but his long completions were a key factor in the game. Shula's record now against Allen stands at 8-8-1 since that November day in Wrigley Field in 1960.
The rematch to end the season is inconsequential since the Bears knocked off the Rams the week before. Shula's Colts finish 13-1, beat Minnesota & Cleveland in the NFL play-offs before the fateful loss in Miami against the Jets. George Allen is fired by Dan Reeves after a 10-3-1 season, but is re-instated when his players demand his return. Allen is rewarded with the game ball from the Pro Bowl on a rainy day in the Coliseum with a roster of 17 Colts and Rams in the win.
The aftermath you ask? The Rams explode to an 11-0 record in '69 including a win in Baltimore, but four straight losses end Allen's season as Los Angeles is beaten on the road in the play-offs in Minnesota. Shula's Colts cannot erase the memories of the Super Bowl and though he has a winning season of 8-5-1 . . . his time in Baltimore is over.

No one and I mean no one would have stated on October 27th, 1968 that Allen and Shula would ever meet in a Super Bowl, let alone with different teams, yet that is exactly what happens in January of 1973—but that is a story for another day.
Posted by TJ Troup at 5:08 AM