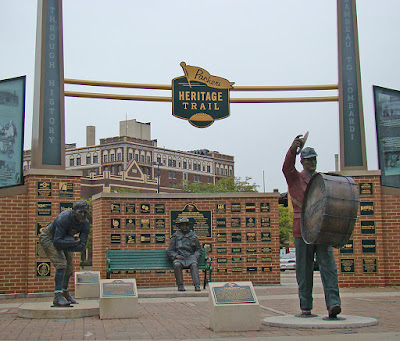 Walking the Heritage Trail is one way
to celebrate the Packers 100th season of football.

The Packers are commemorating their 100th season this year.

On Sunday against the Buffalo Bills, ’s defense locked down as never before in 99 previous campaigns.

Kyler Fackrell, Jaire Alexander, Ha Ha Clinton Dix and others turned quarterback Josh Allen’s first visit to Lambeau Field into a nightmare. Fackrell registered three sacks and Alexander and Dix each came away with interceptions as snuffed out 22-0.

’s defense has been oft-maligned in recent years. The unit surrendered more than 5,500 yards in each of the last five seasons (2013-17).

A year ago, the Packers pass defense was particularly suspect. It gave up 30 touchdown passes and, for the first time ever, allowed opponents to compile a passer rating (102.0) greater than 100.

In , the Packers found the perfect salve. If this game is any indication as to what can be expected from first-year defensive coordinator Mike Pettine’s unit going forward, all of Packerland is onboard.

yielded 145 yards to the Bills. The team gave up 58 rushing, holding the always dangerous LeSean McCoy and Chris Ivory to 39 on 11 carries.

Those are solid numbers. But pass defense is where a new standard was established.

came out throwing, literally, on its first offensive play. It continued to attack in that manner in part because it trailed for all but 9 minutes, 45 seconds of the game and in part because of its limited success on the ground.

Such a concerted air attack has often meant trouble for . Even when the Packers have prevailed, yards and points have usually been conceded in bulk.

Granted the Bills are playing with a rookie quarterback. Allen had started only two games before traveling to .

But credit the Packers’ defense. It made sure Allen looked every bit the novice.

Linebacker Antonio Morrison pressured Allen into an incompletion in the first quarter. Fellow ‘backer Reggie Gilbert did the same in the second.

In addition to Fackrell, five others – Blake Martinez (1), Clay Matthews (0.5), Gilbert (1), Nick Perry (0.5) and Jermaine Whitehead (1) – soloed or shared in a sack of Allen. dumped the youngster seven times for 64 yards in losses.

As a result, Allen threw wide. He threw long. He one-hopped a pass intended for receiver Robert Foster in the second quarter.

During one stretch in the first half, Allen fired incomplete eight straight times. Of those passes he did complete, more than half gained fewer than 10 yards.

It all added up to a passer rating of 36.3, a number that dipped to 9.9 after Clinton-Dix came away with his pick midway through the third quarter.

grossed 151 yards through the air on 16 completions in 33 attempts. Factor in sacks and the Bills netted a grand total of 87 yards on 40 passing plays.

Never before had the Packers allowed fewer than 100 yards passing when an opponent dropped back 40 or more times. Never.

It’s no surprise that has provided target practice for scores of teams over the years. Prior to Sunday, had participated in 232 regular-season games in which the competition dropped back to pass 40 or more times.

In almost three-quarters of those cases (172), opponents gained 200 or more yards. In 62 instances, 300 was hit or exceeded. Twelve times did adversaries come away with 400 or more yards.

And in one glorious, 60-minute, defense-is-optional afternoon, more than 500 yards were extracted. Matthew Stafford, Calvin Johnson, and the Lions staged that air show on New Year’s Day 2012.

One need only look back a few seasons to be reminded of the damage a sustained aerial assault can do to the Packers. Gamebooks from some of those outings might still be smoldering around the edges.

Of course, there are those occasions where the Packers yielded little despite being bombarded. surrendered fewer than 125 yards on six occasions prior to facing the Bills.

improved to 2-1-1 in blanking the Bills. It also lowered its defensive passer rating, a move as beneficial as lowering one’s blood pressure.

Through three games, ’s defensive passer rating was a hefty 103.1 Had that persisted into January, the team was in danger of joining the Lions of 2008-09 and 2015-16 as the only teams in NFL history to allow triple-digit ratings in consecutive seasons.

However, after the strong showing against the Bills, the Packers’ defensive rating has dropped to 86.9. Should that number trend lower, more victories are sure to follow.

Extra point
The Eagles of 1940 were the first team to attempt 40 passes against the Packers in a game. Davey O’Brien completed 18 of 40 throws for 225 yards in a 27-20 loss at City Stadium in the season opener for both teams.

Top 40
Fewest passing yards given up by Green Bay in games in which its opponent had 40 or more passing plays.