LOOKING BACK
Bu John Turney
Both Lawrence Taylor and J.J. Watt have won the AP Defensive Player of the Award three times each, the most by any players in the history of that award. However, there are other major Defensive Player of the Year awards that are or were recognized by the NFL/NFLPA Collective Bargaining Agreement, the NFL Official Record & Fact Book and Total Football:  The Official Encyclopedia of the NFL which is the reference book used by the Pro Football Hall of Fame.

So, are Taylor's accomplishments in this are rivaled by Watt? Or even surpassed?

Yes, we know, there will be the screams of partisans who will call L.T. the "GOAT" (greatest of all time) which he is. But that is beside the point, really. He can be that as the premier rush backer in the history of the league but also have his record looked at closely so as to give JJ Watt's accomplishments their fair due. 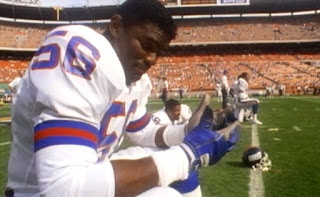 Let's begin with the AP Defensive Player of the Year. 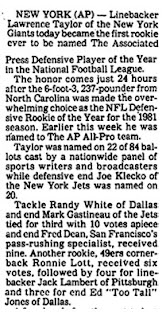 Taylor edged Joe Klecko in 1981 22 to 20 in the vote total. Kelcko's total was likely affected by Mark Gastineau getting 10 votes. Bot Klecko and Gastineau totaled over 20 sacks in 1981 as the Jets recorded 66 sacks and made the playoffs for the first time since the Namath era. 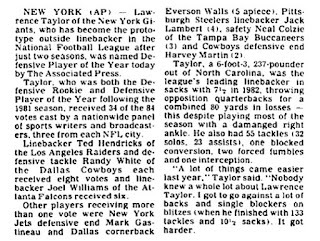 In 1982 Taylor dominated the AP voting with 34 votes and the nearest competitors receiving 8 votes. 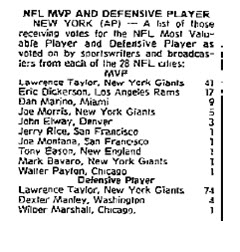 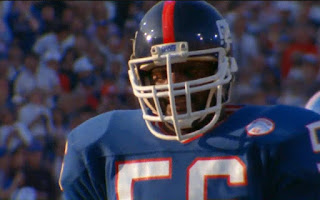 In 1986 Taylor again dominated the MVP and Defensive Player voting. There was no question as to who the best player was, according to the voters.

Now, here are Watt's totals. He was dominant in all three—

So, in terms of the votes, you have to give the edge to Watt, being the overwhelming leading vote-getter and Taylor doing that twice and also winning a close tally. Now for the other major, recognized awards at the time. For Taylor it was the AP, Pro Football Weekly and NEA (the player's voted)

Taylor was the consensus choice in 1986. In 1981 and 1982 there were other winners preventing a true consensus status for Taylor.

In Watt's era, the major awards were the AP, the PFWA and Sporting News.

As can be seen, Watt swept them all in all three years and Taylor did not.

Finally, here are the stats for the relevant seasons— 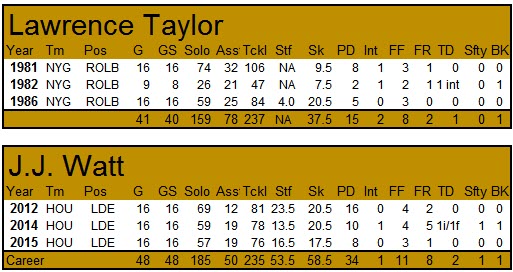 Playing different positions does make comparisons somewhat difficult. But Watt's sack totals and stuff totals are impressive. The Giants didn't have good records for run stuffs (tackles for loss) in the first couple of seasons, but from available data they weren't near what Watt did.

So, does all this make Watt the better player? No. Of course not. Does that give him the edge when looking at who was, at the time, recognized as having the more dominant season? Maybe. It means Watt was more widely recognized in terms of votes and awards in his three great seasons than Taylor was at the time.

We are very aware of "recentism", a phenomenon that gives bias to recent events over things that happened further in the past. However, this is also something called "golden age thinking" which has a bias towards things in the past that causes folks to overrate or "misremember" how things actually were at the time.

Regardless, it could be all moot if Watt wins another DPOY award which is possible, even this season. And in no way are we lessening what LT did. It's just that when we hear "Lawrence Taylor and J.J. Watt are the only two players to win the AP DPOY award three times" we know that's true but we also know there more to the story and if one looks at the accomplishments of the seasons in question one would have to rate Watt's accomplishments slightly higher.

We look forward to your angry comments!
Posted by John Turney at 6:22 PM