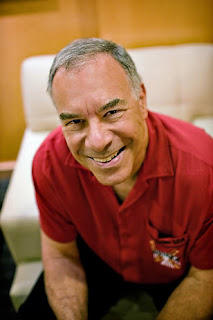 Today is Steve Sabol's birthday; my departed friend(six years now) left a lasting impression on all of us that knew him. One of the Steve's favorite stories to tell was of summer camp as a boy sitting around the campfire singing old songs, thus the title "what do you do with a drunken sailor"....which became the theme song at NFL Films. Steve left no stone unturned as his creativity in filmmaking which can be directly tied to the French artist Paul Cézanne and his quote "all art is selected detail".

Steve and his dedicated and talented staff lived that quote over and over again. Am honored that Steve wrote the foreword of my first book, and in that foreword he explained to the reader that I told stories by using statistics and analysis of those statistics. Since he supplied film to me was much easier to tell my stories. When visiting NFL Films our discussions usually began with "Coach, what are you working on?".

Steve was enthusiastic in his support, and relished me handing him lists of my research. Wish I could hand him the list of my latest detailed research on defensive fumble returns. From 1950 through 1969 defenders gained 10,763 yards on fumble returns. The league manual lists the man or men who led the league each year. Some are household names, and some are having a brief moment in the sun.

Some are rookies like one of Steve's and my favorite players like Dick Butkus who led the league in 1965. Was told by some researchers this topic was boring, and almost impossible to list each defender and how many yards on the return. 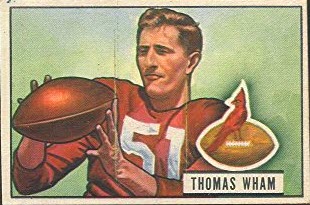 My quest of course begins with the league manual, and beginning in 1950 realized that Joseph T. LaBrum and his staff had errors. The research for that '50 campaign was difficult since the "numbers" did not add up? Wait a minute? There are 32 yards missing? Who do they belong to? Starting with the league leader Tom Wham of the Chicago Cardinals, and voila . . . in the Chicago Tribune write-up and watching film—there is Tom returning a New York Giant fumble 32 yards.

Many seasons the league manual is correct, and can account for how far the fumble was returned and who was it against. Steve would have asked very direct and insightful questions, which takes me to the next part of the saga. The record book does not list which team holds the record for most yards gained returning opponent fumbles during a game (fumbles are the last area listed on the old score sheets).
Twenty-one times during this twenty year time frame teams returned fumbles over 100 yards in a season, but did any team return fumbles over 100 yards in a game? Let us call this the Chuck Howley stat. Howley began his rookie season in 1958 as the starting left linebacker for the Bears, yet as the year progressed he is replaced by veteran Wayne Hansen.

On a snowy December day in Wrigley and Joe Childress of the Cardinals is being tackled in the backfield by all-pro middle linebacker Bill George as rookie right corner Erich Barnes blasts into Childress knocking the ball loose. Right safety Charlie Sumner scoops up the ball and sprints down the right sideline for 86 yards and a touchdown. Later in the game Doug Atkins returns a Cardinal fumble 20 yards, but Doug is not near finished.

Atkins has improved dramatically over the last two years and nails the Cardinal quarterback and the ball is on the frozen ground again. Hansen grabs the ball and gains 16 yards to again put the Bears in scoring position in the one-sided victory. Chicago gains 122 yards in defensive fumble returns in the game which is the most during this twenty year time period. A quick note: late in the game Zeke Bratkowski of the Bears completes a pass to slotback Bill McColl who after making the catch begins to juggle the ball. McColl is surrounded by Cardinal defenders (Lane, Patera, and Taylor), and the ball pops into the hands of rookie safety Bobby Gordon who gains 42 yards to the Bear three yard line (film shows this).

The league manual lists Gordon with a 2-yard return for the season—OOPS! LaBrum and his staff have erred again.
The Dallas Cowboys have finally become a mature powerhouse football team in 1966, and the opponent is the expansion Falcons. Junior Coffey begins to sweep left, but Bob Lilly penetrates the backfield and forces the fumble, which weakside linebacker Dave Edwards advances 19 yards before Coffey knocks him down. Atlanta is deep in Dallas territory and left halfback Perry Lee Dunn goes over right guard and fumbles. Strongside linebacker Chuck Howley grabs the ball and sets sail for the goal line. As Chuck was running 97 yards to score in the Georgia sunshine he probably was not thinking about a snowy day on the sidelines in Wrigley Field in December of  '58? These are the only two teams in this time period to gain over 100 yards in fumble returns in a game. 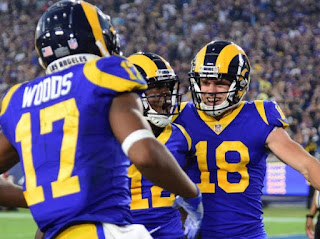 You could call the Rams media department, and they would not be able to tell you the following: The Rams last Thursday night in the Coliseum against the Vikings accomplished this for the FIFTH time. Los Angeles was the first team to accomplish this (also in the Coliseum) in 1951 against the New York Yanks.

In closing—Happy Birthday Steve, and no doubt you are smiling up in football heaven.
Posted by TJ Troup at 5:30 AM