TUESDAY TIDBITS: The Game "Live" in the Stadium 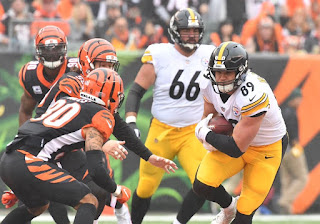 So many times when watching the game on tv have tried to surmise/guess what the coverage was after a play, and most of the time come up still drawing a blank. Have been fortunate to attend many games over the last 54 years, and Sunday in Cincinnati adds to my continued quest to learn the game of passion that so many of us relish.

Game starts with overcast skies on a cloudy October day, and during the game drizzle & mist, but weather was not a factor in a game with NO turnovers. The Bengals are damn tired of losing to the Steelers and being in first place they could distance themselves from their hated rival. The Bengal offense was based upon excellent field position and short completions by Dalton. Watching him run his routes well, and make some key receptions was impressed by Tyler Boyd. 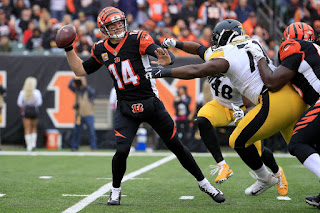 My first evaluation then is of the Steeler secondary and their struggles on pass defense. Right corner Artie Burns will continue to be a focal point of opponent passing attacks; he looked slow, and gave way too much "cushion". When Pittsburgh was able to get Cincinnati in 3rd and long situations coaches Butler & Tomlin aligned in Cover 2 and are just so much better on defense when they can use this coverage.

Much will be written this season concerning the possible improvement of a defense that has a strong lineage to live up to—PITTSBURGH STEEL CURTAIN OR BLITZBURG. We will see if the pass rush brings them some success. 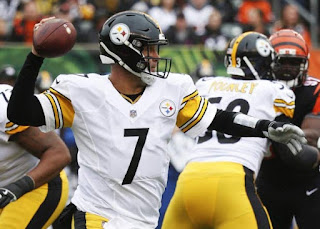 Watching Big Ben and his cohorts is a joy. The Black & Gold offense when they do not turn the ball over (none on Sunday) is a very difficult challenge for every defense in the league. Pittsburgh used scheme/formation to run the ball successfully as Conner running hard behind solid blocking exploited the rust/slowness of big mouth Burfict. Ben was not sacked, and at times seemed to have forever to find a receiver. That statement raises a question; how long can you cover someone in man to man before he gets open?

Cincy aligned in man to man almost the entire game with young corners Jackson & Fitzpatrick both giving strong efforts and glue like coverage. Black & Gold motion and alignments created situations for Ben to know exactly where defenders were and he attacked with glee. McRae and Bates of the Bengals are going to be attacked all season if they do not improve.

Tight ends McDonald & James caught a boat load of short passes to keep the chains moving, yet late fourth quarter and the Bengal fans had the Stadium rocking as they took a 21-20 lead—is this the game where Cincinnati gets the "monkey off its back"? The gentleman next to me remarked, "they are giving big Ben too much time". So well stated. Needing so many yards in such a short time means simply there must be some long yardage completions.

Pittsburgh's o-line continued their stellar play as they not only did not allow a sack, they picked up the "blitz" easily. Ben to Smith-Schuster over the middle to position Pittsburgh for a long field goal. The officials might have missed a "pick play" as the Steelers aligned with the best receiver in football Antonio Brown aligned on the left and as he zipped into the middle of the field with the catch and the winning touchdown.

Since I could easily see this play happening and just knew where the ball was going, the question is simple why a full blitz and no safety in the middle of the field. Coach Lewis probably would not have a very good answer for me, yet was sure fun being in a Stadium again watching a game live. Where do we go from here.

Cincinnati remains in first place, but have to travel to Pittsburgh later in the year knowing they are now 5 wins and 19 losses in their last 24 games against the black & gold after losing at home for the 11th time in their last 13 outings against their hated rivals.
Posted by TJ Troup at 5:37 AM