Deacon Got the Head Slap From Tombstone? 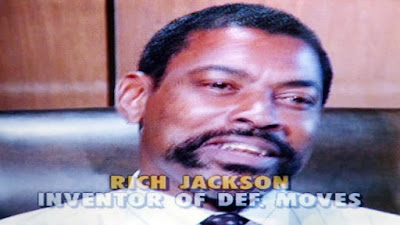 Poking around the Internet this morning we came across a preview-type article for the Rams at Broncos games tomorrow. In it, there is a line that states, "(Deacon) Jones is often credited by historians for the head slap, but he himself said frankly that he got the move from (Rich) Jackson". 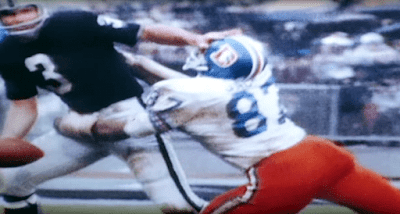 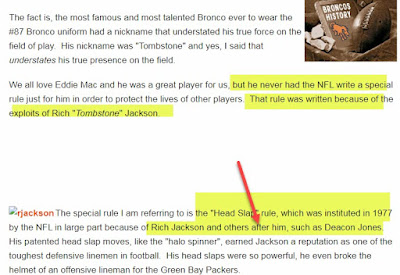 Well, the source seems to be Denver's legendary PR man Jim Saccomano and normally people can take things he says or writes to the bank. But not so in this case.

As far as the head slap rule, remember, it came about in two phases, 1976 and 1977.  Jones was out of the league after 1974 and Jackson was out of the NFL after the 1972 season, though he did talk to Chuck Fairbanks about playing nose tackle for the Patriots for 1973, but Jackson wanted it to be a player-coach situation so he could get his coaching career underway. Jackson passed on the Patriots offer and pursued other avenues in his career.

From 1974-76 almost all defensive lineman would employ the head slap, though some more than others. Carl Eller and Claude Humphrey were Deacon clones in some ways, being similar in heights, weights, and speed & quickness. Jones once told us while chuckling, "Yeah they all copied my shit".  Jack Youngblood was also a frequent head slapper as was Coy Bacon who was still using the multiple head slap in 1976 (refs missed some calls, for sure) and had a monster year with 22½ sacks.

Here are three stills of Youngblood with an outside slap, then an inside slap, and then another outside slap all from 1972, two from the same Bear game— 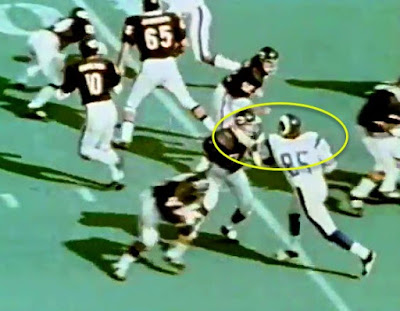 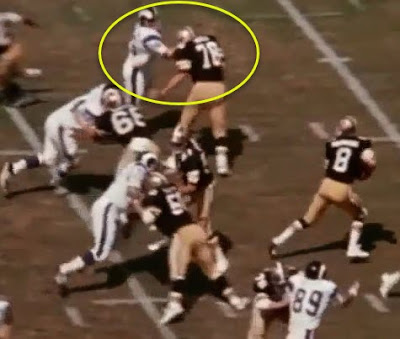 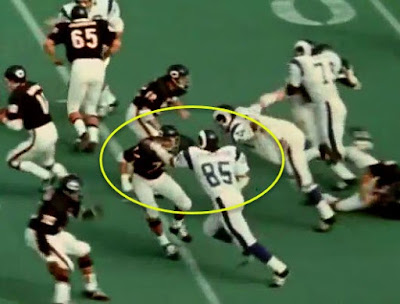 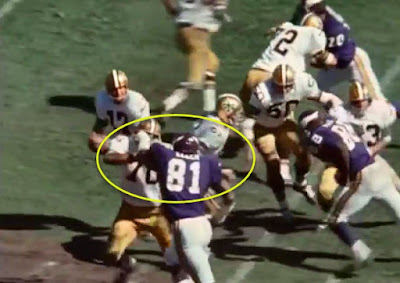 This is Claude Humphrey using the move— 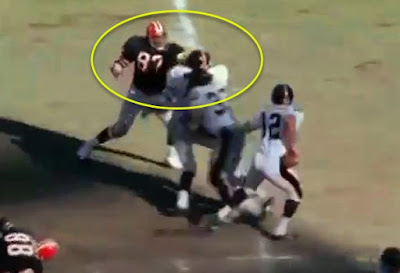 So, we think it was not one single thing, surely not Jones or Jackson who had been out of the league, but part of several rule changes to open up offenses. In 1974 they made offensive holding a 10-yard penalty rather than a 15-yarder,  in 1975 they opened up hand usage for linemen (and did it again in 1978). In 1976 was the aforementioned outlawing of the multiple head slap and in 1977 the banning of it altogether.

In 1976 the percentage of pass plays that ended in sacks was at 9.1%, up from 8.3% in 1975 and about 7.9% in 1974. We think that the rules makers were simply trying to open up the passing game and also increase player safety (possibly an afterthought) but the talk at the time was that if an offensive player cannot hit a defender in the head, then the defender shouldn't either.

From that, we think it was not one thing or one player that caused the rule changes that outlawed the head slap but a small perfect storm of things that caused the banning of the move.

Now, as to Deacon saying he got the head slap from Tombstone we simply cannot buy it, in fact we are sure. We've seen Jackson's film from 1966, he was with the Raiders and is playing linebacker, he doesn't play much but gets some snaps in. 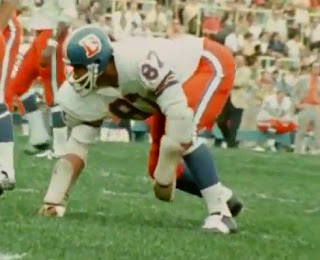 By the time Jackson was beginning with the Broncos, Deacon Jones was an All-Pro with the Rams and had been since 1965. We've seen film of Jones using the head slap in the early 1960s.

And here are some stills from 1964 and 1965 showing the patented move of Jones, an outside slap to the noggin of the right tackle. Most of the stuff from 1963 and prior is in black & white, so we chose these color shots from times when Jackson was not even in pro football. 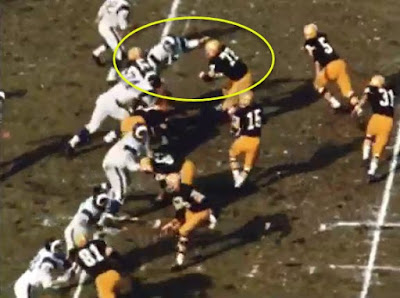 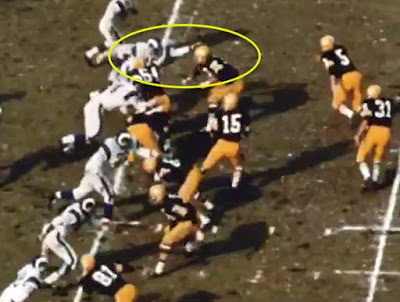 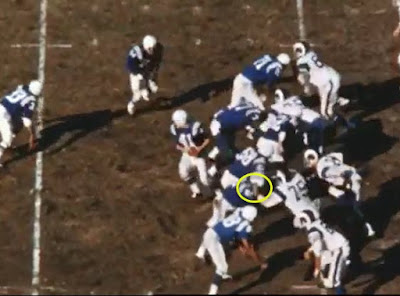 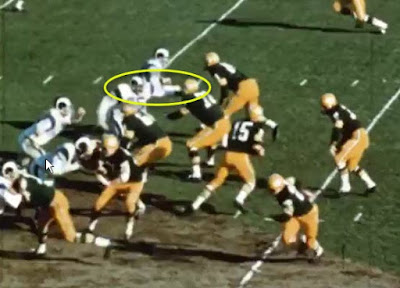 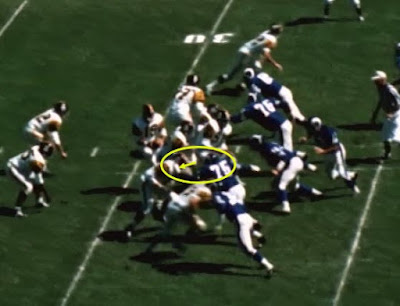 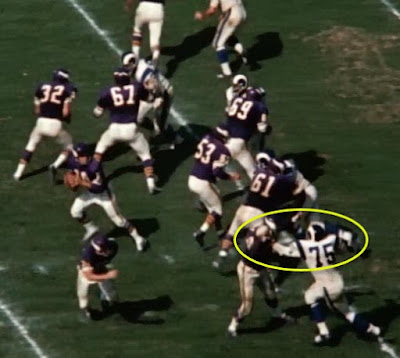 We also think Jackson was an innovator on his own, taking one thing and tailoring it to him. Jackson had moved he called the "Halo Spinner", the "Bulldog" and likely others. 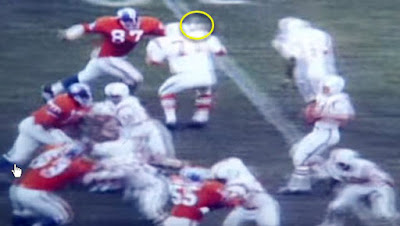 We've interview Jackson a couple of times and could not be more impressed with the man. Not only his playing skills, but his commitment to education, law enforcement and to just being a good man. But we just cannot agree that Deacon got the head slap from him. The timing does not fit and the film does not show it. "The eye in the sky does not lie".

Did Jones invent it? No, we don't think so. We think he can claim that he perfected it into something that was used as a primary pass rush move. We thing Rosey Grier was a help in teaching Jones the nuances of it. What could have just been an intimidation move became a deft strategy to get to the quarterback. We've seen Ernie Stautner do something similar in the 1950s but often appears to be using the palm of his hand to strike a blow to the side of the offensive lineman's head.

Again, was Stautner using it as a "move" or as a way to punish someone on something that wasn't going to be called a penalty. We honestly don't know. But blows to the head have been around a long time, prior to when either Jones or Jackson entered into the league.

What can be said is that both perfected it, expanded its use to the point where many were copying them and that, in our view makes them innovators. It's just that Jones got there before Jackson.

Sorry, Sacco, but you still are batting .999 in our book.