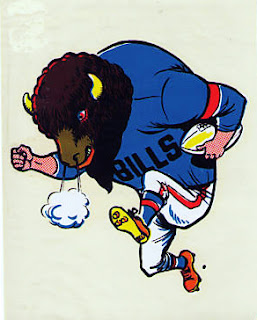 The Buffalo Bills entered the 2018 season with controversy swirling all around them. Despite selecting quarterback Josh Allen with the seventh overall pick in the college draft, Bills head coach Sean McDermott tapped second-year signal caller Nathan Peterman to start when the season opened against the Baltimore Ravens. It wasn’t so much that fans wanted to see the new “franchise” quarterback Allen was projected to be, for most logical observers knew he needed some experience before he would be ready to assume the reins of leadership. The problem for a large segment of Bills fans was that they were simply not ready to accept Peterman on the grounds that he had thrown five interceptions in his first career start the previous year.

What these Bills fans didn’t know, or, more likely, wouldn’t accept, was that several quarterbacks (including many with busts residing in the Pro Football Hall of Fame) have thrown five or more interceptions in a single game. Just to name a few, we’ll start with Oakland’s Ken Stabler, who threw seven picks against the Broncos in 1977. Houston’s George Blanda attained a dubious high of six no less than three (yes, three!) times, including twice in the same season (1962 versus Buffalo and Dallas). For pundits who insist those numbers are ancient history, how about the Packers’ Brett Favre tossing six interceptions against the Rams in 2002, or the Colts’ Peyton Manning throwing six against the Chargers in 2007?
Then, of course, there was Joe Namath, famed gunslinger of the New York Jets, who threw six picks twice in his career (versus Baltimore in 1970 and, then again versus Miami in 1975. He also has five different five-interception games to his credit, including two against the Buffalo Bills.  The first came in a 33-23 loss to Buffalo in October 1966, but that was when the Bills were still a powerhouse in the old American Football League. The second, on September 29, 1968, will be the topic for this article, since it came at a time when the Jets were soaring toward an unlikely world championship and the Bills were descending the stairs that would lead them to the league’s basement, and occurred 50 years ago this season.
The Bills were a team seemingly in total chaos when they welcomed the New York Jets to War Memorial Stadium in late September 1968. After losing their first two games that year--including an embarrassing 48-6 pasting at the hands of the Oakland Raiders in Week 2—owner Ralph Wilson fired coach Joe Collier and replaced him with Harvey Johnson, the team's chief scout.  By all accounts, Johnson was an astute judge of football talent, but by no means was he prepared to lead a team as head coach.
"Harvey was just in there to manage it until the season was over until they could hire somebody else," said defensive end Ron McDole. "He didn't have the background to be the head coach, and he'd be the first to tell you that.  He didn't want the job. He knew enough ball, and so, like anything else, the boss comes in and tells you, 'You're the new head coach.'  Harvey was probably the only guy they could get at that point in time, and so Harvey took the job."

The team's first game under Johnson was played at Nippert Stadium in Cincinnati, and the change in leadership saw the same result, as the expansion Bengals handed Buffalo its third straight loss. It didn't appear that things were going to be any different when the Bills returned home to face the undefeated Jets in Week 4. The Jets featured a high-flying offense, led by Namath, arguably the most famous name in the game at the time. The Jets were the odds-on favorite to take the AFL crown and represent the league in Super Bowl III. But the Bills were a proud bunch, with several veterans remaining from the team that just a few years earlier won back-to-back AFL championships. They might not have been playing for any titles in this one, but there was no way stalwarts such as Ron McDole, Booker Edgerson, Harry Jacobs, and Tom Sestak were going to roll over for anyone. 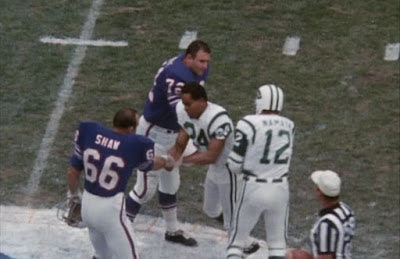 Team captains meet at midfield for the toss of the
coin.  Representing the Bills are guard Billy Shaw
(66) and defensive end Ron McDole (72).  For the
Jets, it's defensive back Johnny Sample (24) and
quarterback Joe Namath (12).

But when the New York marched right down the field to score on a four-yard Namath-to-George Sauer touchdown pass on their first drive, a sense of “oh, here we go again” washed over the crowd.  The players, however, weren’t having it, for, on the Jets’ next possession, the Bills’ began a crime spree that led to the greatest upset victory in team history.

It started with safety Tom Janik, who picked off a Namath pass and returned it 37 yards, setting up a 35-yard field goal to put the Bills on the board. Buffalo took a 10-7 lead just as the first quarter ended, but the Jets' defense rose up late in the second quarter, forcing a fumble at the Buffalo 10. After throwing two straight incompletions, Namath attempted to hit Curley Johnson in the right flat.  But Janik intervened to make his second theft of the half, snatching Namath's pass before it could reach Johnson in the end zone. Janik turned upfield and made a beeline for the New York end zone, sprinting past the riotous Buffalo bench as he streaked down the left sideline. Janik cruised untouched the rest of the way for a 100-yard touchdown run.  Just like that, the Bills were on top, 17-7. 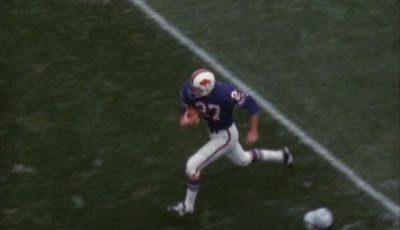 Tom Janik in mid-sprint as he makes his way for
a 100-yard interception return for a touchdown.

The Jets bounced back to take a 21-20 lead before intermission, but Janik's theft had given his team a much-needed infusion of confidence. The Bills re-established the momentum in the third, reclaiming the lead with a field goal midway through. The veteran Buffalo defense stepped up in the fourth, with veteran cornerbacks Butch Byrd and Booker Edgerson returning two more of Namath's passes for touchdowns (53 and 45 yards, respectively) within a span of 62 seconds to give the Bills a commanding 37-21 lead. The Jets scored twice more, but the damage was done and the Bills--19-point underdogs at game time—claimed the biggest upset of the 1968 season, defeating the eventual Super Bowl champions, 37-35. 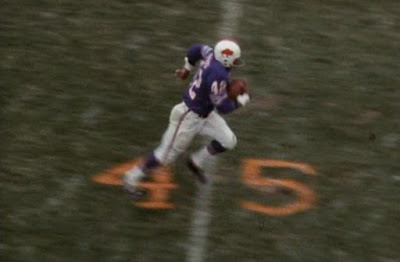 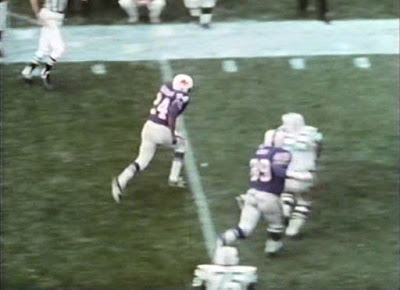 Booker Edgerson (24) returns an interception for
a touchdown on the Jets second straight
possession. Moving in to block for Booker is
defensive end Tom Day (89).

This was the only victory the Bills would record in 1968, as the team went 0-9-1 the rest of the way to finish 1-12-1--the worst record in both the AFL and NFL--and earn the first overall pick in the upcoming college draft.  They used that pick, of course, to select O.J. Simpson, the Heisman Trophy-winning halfback from the University of Southern California.
*****

So how did they manage to pick off Namath five times for the second time in three years?  One word:  Simplicity. A close examination of the film shows that the Bills defense was not doing anything out of the ordinary. Said Head Coach Harvey Johnson, “We didn’t feel we could blitz Namath effectively, so we just hung back and waited for the interception.”

Middle linebacker and defensive signal-caller Harry Jacobs had the team aligned in their standard 41 Red (or 4-3 with man-to-man coverage) on every interception. There were only a couple of noticeable variations. First a right side “twist” on Janik’s 100-yard pick-six in which defensive end Tom Day slanted inside toward the offensive guard and defensive tackle Tom Sestak looped outside. 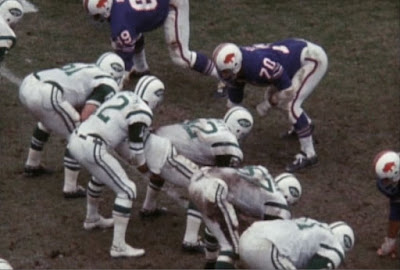 The Bills aligned in standard 4-3 formation prior
to Tom Janik's interception and 100-yard return. 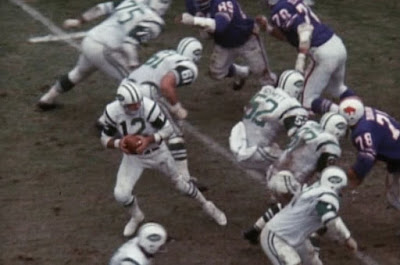 In this image, the twist (or stunt) that the left side
of the defensive line is employing can be clearly
seen.  Defensive tackle Tom Sestak (70) is step out
and around defensive end Tom Day (89), who is
pinching in toward guard Bob Talamini (61).
This stunt did not effect the play at all, as Sestak was picked up easily by the left by the offensive tackle, giving Namath plenty of time to throw.  "I was covering Johnson all the way," Janik explained. "The ball was perfectly thrown.  I hesitated a split second, then stepped inside my man.  All I saw was daylight. Namath came up on the play downfield and I was getting tired, but I knew he was, too, and that knee had to be bothering him, so I just kept going."
On Booker Edgerson’s interception, the Bills used a standard 4-3 but blitzed outside linebackers Mike Stratton and Paul Guidry, thus hurrying Namath’s throw, which flew directly into Edgerson’s waiting hands. From there, it was an easy stroll into the end zone for the Bills’ veteran cornerback. 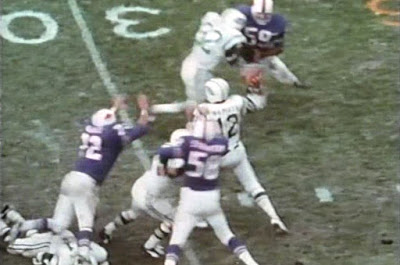 Namath being pressured by the Bills defense as
outside linebackers Mike Stratton (58) and Paul
Guidry (59) blitz, resulting in a Booker Edgerson
interception.

The rest of the thefts appear to be attributable to little more than good, solid defense and, according to Jets’ Head Coach Weeb Ewbank, “Lousy protection.”

But Namath was not allowing excuses to be made in his behalf.  “I’m to blame for the interceptions.  Yeh, me—this dumb guy sitting here.  I threw the ball, so I’m at fault."
*****
Notes:  The Bills amassed 235 yards on interception returns.  Tom Janik's 100-yarder eclipsed the old Bills record of 91 yards set by Booker Edgerson against Houston in 1964 and stood as the standard until October 3, 1976, when Tony Greene went 101 yards with an interception against the Kansas City Chiefs.
Janik's single-game total of 137 interception return yards also set a new club record that still stands, as does the record three interceptions the team returned for touchdowns that day.
The Bills’ defense also recorded nine passes defensed this day. Several of which were balls batted down by defensive lineman at the line of scrimmage, while a couple of others were aerials broken up by defensive backs, which could have resulted in even more interceptions.
It should also be noted that the Bills had a sixth interception this day—and fourth pick-six—when Butch Byrd pilfered an errant Namath throw on the Jets’ possession immediately following Janik’s 100-yard TD return. The play was nullified however, as the Bills were called offside.
Posted by Jeffrey J. Miller at 10:36 AM