Apropos of Nothing—But This Could Blow Your Mind 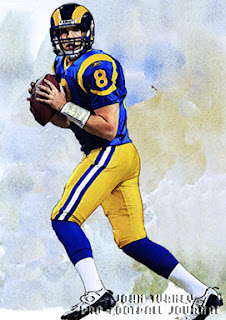 Kurt Warner is a Hall of Famer, MVP, Super Bowl winner and MVP and so much more. Here are his final 14 full games with the Rams (a couple of games with 2 attempts and one game with less than 12 attempts in relief were eliminated. 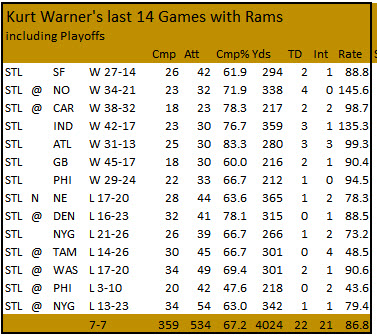 Much has been made of Jared Goff's recent slump, which began after a great run of 27 games. We know Goff is a top overall pick, is a Pro Bowler and has taken his team to the Super Bowl.

Here are his last 14 games with the Rams. 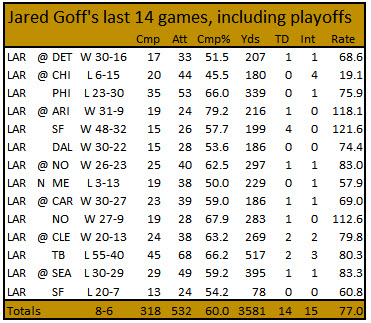 Of course, Sam Bradford we know as a guy who never lived up to his Number One overall draft status, couldn't stay healthy and is out of the league. We wondered, what do his final 15 games with the Rams look like. 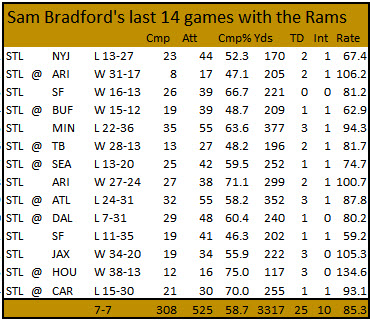 With a much less talented offensive team (line and receiving corps) he's got the same W-L record as Warner and a higher passer rating than Goff.

No, don't jump to conclusions, we are not saying Bradford is better than either or that the Rams should not have traded him. We are suggesting that he stayed healthy and had the Rams a better offensive line and receiving group (we've talked to coaches and scouts who say those groups the Rams had from 2010-2013 wee below average, at best) he might have lived up to his drafting status.

In fact, given the circumstances, his rookie season at 7-9 was a wonder and from 2012-13, those 23 games he was good, even very good at times. The 2011 season was a high ankle-sprain disaster.

We don't expect Goff to stay in a slump. He may be having some issues, but so does the offensive line. And it may be possible teams have found some answers to McVay's offense. This year the special teams are not making game-changing plays like that had in 2017 and 2018. The defensive can finally stop the run but is average at stopping the pass. And Todd Gurley, when healthy has been just okay, not the Offensive Player of the Year-type we've seen in 2017-18. The Rams struggles are not one thing, it's that they were very good at almost everything recently and now the yare average in a lot of those same things.

So we think Goff will rebound but we were a bit stunned when we saw how well Bradford did with little talent in his final 14 games compared to the two big-time names the Rams have had.

We think you will be shocked, too.