LOOKING BACK
By John Turney
Next Sunday the 49ers will host the Panthers in a Week 8 tilt at Levi's Stadium. It will be the seventh game of the season for the 49ers.

Through six games of the season the 49ers have allowed 64 points. The 1976 defense allowed 63 points in seven games so the current iteration cannot top that but if they allow 22 points or less it will mark the second-best start for a 49er defense ever. 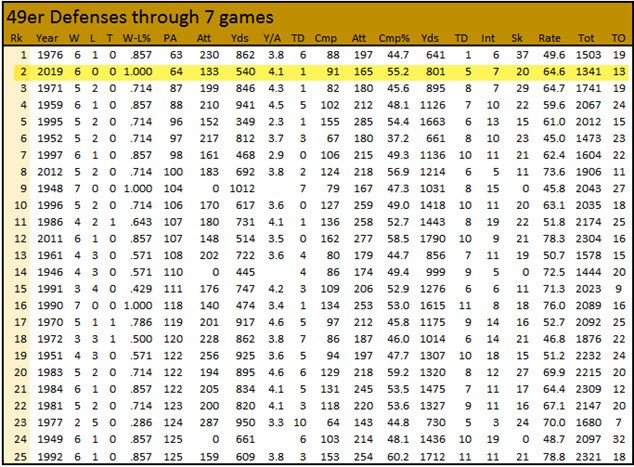 The 49er defense has allowed just one rushing TD so far and has a fine 64.6 defensive passer rating. We'd be raving about it if the Patriots weren't at an amazing 35 or so. The are on pace for perhaps 45 or so sacks and the rushing defense is among the best in 49ers history.

Richard Sherman is playing well (he played well last year, too), Fred Warner and Kwon Alexander are solid at linebacker but it is the defensive linemen that are driving this train.

DeForest Buckner has a rare build for a three-technique at 6-7, 300 pounds. He looks like a 3-4 but he gets great push and makes a lot of players. He made the Pro Bowl last year and has a shot this year, too.
One end, Arik Armstead has really stood out no that he's been healthy for a year and a half. This is looking like a breakout season for him. He stands tackles and tight ends up, presses them and has the ability to shed and find the ball carrier.
The other end is rookie Nick Bosa. He's got four sacks and four run stuffs and is credited with 10 quarterback hits. But after starting slow with an injury he's really come on. He has to be considered a front-runner for Defensive Rookie of the Year.
Six-foot 321 point D.J. Jones is the shade tackle and he has not been as noticeable in terms of big plays but he does a good job in the middle. Solomon Thomas and Ronald Blair play on passing downs inside and Dee Ford plays opposite Bosa on passing downs and has 4.5 sacks and two forced fumbles so far.

Since the 1978 rule changes the only the 1988 Buffalo Bills have had a lower total over three games (174 yards). The '88 Bills also had a steak of 3 games of allowing less than 80 yards net passing.

There have been longer streaks of this nature, but only the 2019 49ers and 1988 Bills have happened after 1978 the demarcation line of sorts when it comes to NFL passing and pass defense records.

The 49ers three-game streak of allowing fewer than 180 total yards and seven or fewer points allowed is something only three other post-1978 teams have accomplished—the 2000 Tennessee Titans, the 1991 New Orleans Saints, and the 1985 Chicago Bears.

As with our posts about the Patriots and Rams, it is too soon to praise anyone too much but again, the 49ers defense, by the eye test, by the numbers looks to be formidable. We will see if they can maintain that dominance.
Posted by John Turney at 5:56 AM