By John Turney
After 16 years in Baltimore Terrell Suggs returned to Arizona, where he played his college ball and at 37 is doing things much younger rushbackers are supposed to be doing.

Suggs has always een a consistent performer and he's been relatively healthy, missing just ten games in his NFL career. He had his "career year" in 2011 when he was All-Pro and was the AP and PFWA Defensive Player of the Year and a Pro Bowler. Five other seasons he was a Pro Bowler as well.

So he's had "honors" but they are light compared to some of the edge players or "rushbackers" of his era. John Abraham was a 3-time All-Pro, Julius Peppers four, Dwight Freeney three-times All-Pro, Demarcus Ware was a five-time All-Pro, Elvis Dumervil two. Jason Taylor, a Hall of Famer (first-ballot!) was a three-time All-Pro. All these compared to the one-time for Suggs.

Most of them were good at prying the ball loose when they got to a quarterback, including Suggs wh has 37 forced fumbles. Abraham and Taylor both have 47 and Julius Peppers has 52 and Freeney has 46 and Ware had 35.

However, none of them played on a great defense, year-in and year-out like the Ravens had. As part of that Suggs was a team defender, sticking his nose in the gaps to stop running plays. Like sacks, stuffs are inexact, but we've found that usually, the best pass rusher has the most sacks and the most gurries. Likewise, the best run defenders make the most plays behind the line of scrimmage and have plenty of assists in that, akin to a hurry if you will.

Add them together and Suggs is on the top of the list. 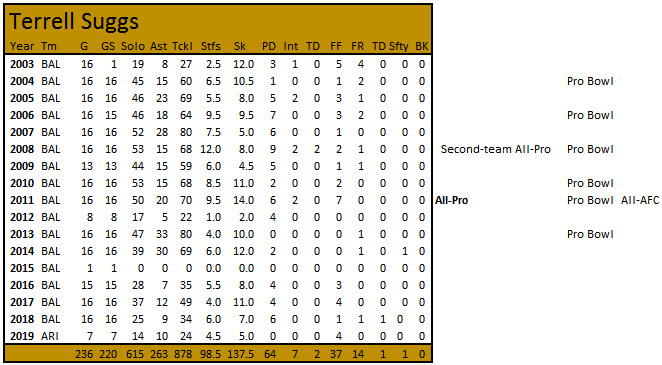 So, does combined sacks and stuffs matter that much? Maybe not. It matters to us because when matched with other things can identify who is working hard in the run game or even who is recognzing the run when it shows from pass formations and we think that fits Suggs to a 'T".