At the 5-game Mark, We'd Vote for Grady Jarrett as the All-Pro DT 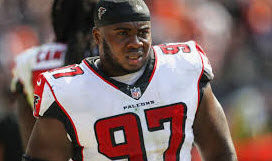 Aaron Donald is the best 3-technique in the NFL. There is no doubt about it in our view and in the view of everything we've read on the Internet.

However, does the best player always have the best year? Here is an example. From 1954-65 Willie Mays was the best player in the National League. One metric for that is Baseball Reference's Wins Above Replacement. 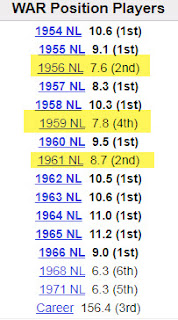 In 1956 and 1959 and in 1961 he was not first. But, who would you want to have on your team—Willie Mays or whoever was tops on those three seasons? FYI the players were Duke Snider, Ernie Banks and Hank Aaron who were all great.

So, similarly, through five weeks, Donald is like Mays—the best in all phases. But, for whatever circumstances, Jarrett is having a slightly better season like Snider, Banks, and Aaron did those few seasons.

Here are the stats for both Donald and Jarrett

Jarrett leads the NFL in run stuffs with 5.5 and has forced a pair of fumbles and has two sacks and has twice as many tackles.

So, will this keep up? At the end of the season will Jarrett still be outperforming Donald? There is no way to tell. Our prediction is that Donald will go off and start making plays game after game, week after week and will end up with double-digits in sacks and stuffs and will be the All-Pro 3-technique, but that is based on the past and his skill level. It's a projection, not a prophecy.

As of this week, in all honesty and fairness we'd list Jarrett as top 3-technique—again not because his skill set is greater but because he's making more plays so far.
Posted by John Turney at 1:36 PM