The 2019 Patriots Pass Defense—The Best Ever?

PERSPECTIVE
By John Turney
Through seven games the Patriots have allowed a single touchdown pass and have picked off 18. One has to go back to the early 1960s to find more ('62 Packers had 21 and the '60 Colts, '61 Packers had 20). But remember, these days about 2.5% of all passes are intercepted and in the early 1960s it was more than twice that making recent picks more impressive.
Additionally, the Patriots defensive passer rating of 35.6 through seven games is 8th all-time but all the previous entries were pre-1978 NFL rule changes that changed the game forever. 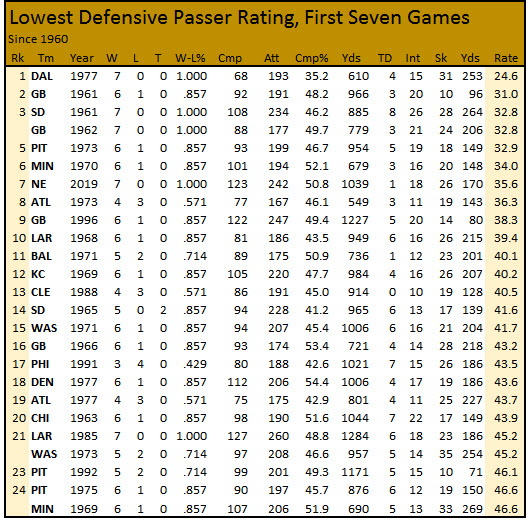 And yes, we get it. Critics will howel "But who have they played"? We'd say they've played NFL teams, same as everyone else. But sure, the strength of schedule and strength of opposing passing offenses is a factor, no doubt. If someone wants to take those factors into account and write about it, we'd love to read it.

What we do know is in this era, to allow one touchdown pass and pick off 18 is impressive and rare and should be mentioned. We also know that the Patriots are putting up pass defense numbers that are on par with the 1960s and 1970s when passing was more difficult than it is today, so that needs to be taken into account.

Certainly it's the major factor in the +175 net points scored/allowed through seven games which is second-best all-time.

So, we will monitor this throughout the season to see how the Pats pass defense finishes in these categories because given all the circumstances—opposing offense strength and era if they keep it up (or close) it could be one of, if not the best, pass defense ever.
Posted by John Turney at 11:18 PM