Book Review— Strength in Numbers: Quarter by Quarter with the Green Bay Packers 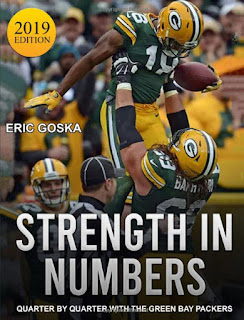 Strength in Numbers: Quarter by Quarter with the Green Bay Packers Paperback – July 29, 2019
by Eric Goska

If you like lists, and if you like a unique way to look at things this is a good book. It's not required that you be a Packers fan to enjoy it but it will help.

Goska has more statistical information about the Packers than anyone, and the Packers are blessed wti some great historians like Lee Remmell, Bob McGinn, and Cliff  Christl and others.

This book takes the concept of the four quarters of a football game and listing who had the most yards or picks or you name it of the first quarter of Packers games, and then the second quarter and so on.

With a franchise as historic as the Packers, it becomes pretty fascinating. Begin with quarterbacks like Bart Starr, Brett Favre, and Aaron Rodgers—their names dominate but you still get a name like Don Majkowski mixed in there.

So, we certainly recommend this book because it is interesting and we know the amount of effort that was needed to complete this task. It was a hard row to hoe, to say the least.

Bob McGinn said, “The fact is that the Packers as a franchise couldn’t have been more fortunate to have the league’s pre-eminent independent historian/statistician/author chronicling them.” TJ Troup will say to anyone who listens, "Every NFL team needs an Eric Goska" and he's right.

Goska is a great treasure to the Packers—when the team needs something statistical they may not be sure about they go to Eric.

So, treat yourself and buy the book, it's worth it.