Marcus Peters is First-Ever Player to Have a Pick-6 For Two Different Teams in Same Season. 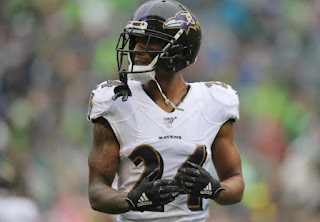 Marcus Peters got traded from the Rams to the Ravens last week and today he returned an interception for a touchdown against the Seattle Seahawks.
It was his second on the season. The first was against the Buccaneers when he was a Ram.
It was the first time in NFL history that a player has a pick-six for two different teams in the same season. We will throw in the caveat that records are incomplete in the 1920s and early-1930s. And with players moving around as much as they did and though it it was a running game, most passes had a high percentage chance of being picked off compared to the day.

So let's call it a  "known" first in NFL history.

Peters, a 'cluer' has always been a player who could make a big play (and also give up one) added to his career totals in interceptions returns for scores—