LOOKING BACK
By John Turney
The 1978 NFL season marked a divide in the NFL passing game due to the rule changes that were implemented beginning in that season.

Below is a list of the lowest defensive passer ratings since 1978 through six games (those with a rating of 50.0 or lower). The Patriots are ninth in that category, impressive since the nearest in time to them are the 1996 Packers—23 years prior. The passing game has open up some seemingly every year so when compared to a league-average the Patriots 42.6 is likely even more impressive than many ahead of them.

Regardless, the Patriots pass defense (and pass rush—25 sacks) has been impressive, though critics will point out the level of competition the Pats have played is not stellar. Nonetheless, the Patriots are 6-0 and the defense is excellent and they have two, maybe three players that could be considered the defensive MVP though Week 6—Jamie Collins, Stephon Gillmore, and Kyle Van Noy.

We'll monitor this and see if the Patriots can keep up the blazing pace. 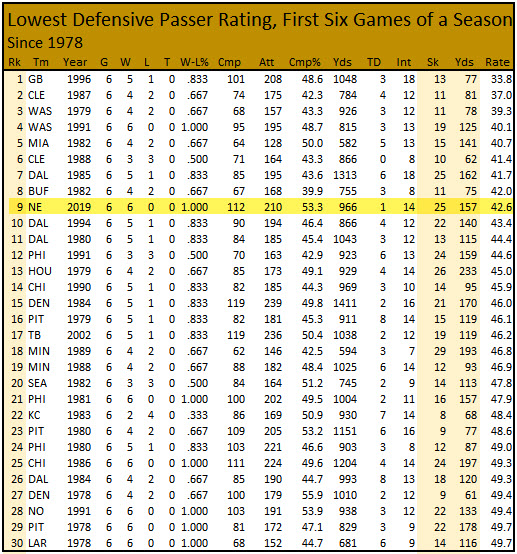