Son of Bum Has the Rams Run Defense in Lofty Company


It has not been a terrific year so far for the Los Angeles Rams, the defending NFC champions. As of this posting, they are 4-3 and in most categories, they are average when in the past couple of seasons they have been at or near the top. Offense, passing offense, rushing, special teams and so on.

Last week they parted with two future #1 picks and a future 4th-round pick to get a shutdown corner—Jalen Ramsey to bolster the pass defense. However, the run defense is one thing that has been doing well, in fact, better than well.

In 2017-18 combined the Rams allowed 4.87 yards per rush, the worst in the NFL over that span (and were 27th in rushing yards allowed). Needless to say, the run defense was not exactly stellar.

Of course, we realize that stopping the run no longer matters like it did in previous generations but we also know that the numbers are skewed in that the rules have been changed to allow more passing, in part by reducing the risk of throwing forward passes. Safety, as well, was part of that mix and that is a good thing, protecting the players. Quarterbacks and receivers are safe no matter what they do, so why not throw more.

Teams counter with five- or six defensive backs, teams then run plays against softer fronts and/or small-count boxes. We get it.

However, football is still football and if you can hold your opponent on running downs to a yard or yard-and-a-half less, it makes the pass defense less difficult.

That said, the Rams are allowing just 3.42 yards per rush this year, a full 1.5 yards per carry less than in 2017-18 combined. They are second in the NFL in that category. What is interesting is to see where that ranks in Rams history because as we know that history is replete with good defenses in eras when stopping the run mattered a full measure.

Here are the top 25 seasons in Rams history of lowest yards per rush. The 2019 Rams are tied for fifth in the seven games they have played this year. 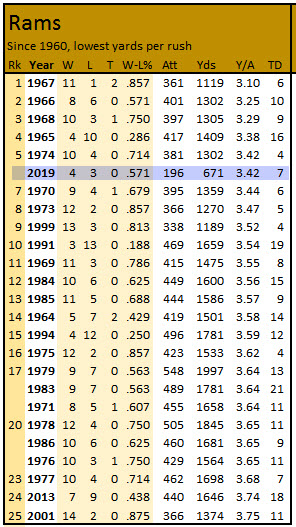 Certainly we are not suggesting that the current iteration of the Rams defense is on par with the Fearsome Foursome or the 1970s Rams defense but we also acknowledge they are making some plays that they have not been making the previous two seasons.

Aaron Donald's sack total is not quite what it has been, but he's making big plays in the run game, and is tied for the NFL lead in tackles for loss versus the run. Michael Brockers, who had a bum shoulder most of last year, is back to his normal self, stacking and shedding offensive tackles. Sebastian Joseph-Day is an upgrade to Ndamukong Suh at nose tackle.

The linebackerd habe contributed, Dante Fowler, who finally caught fire in the pass rush has three run stuffs as the WILL backer (which for all intents and purposes is usually a defensive end in the Phillips scheme). Cory Littleton is always around the ball and the rest have filled their gaps well.
As can bee seen most of the top 25 slots are filled by the Deacon/Merlin led 1960s defenses and then the Merlin/Youngblood 1970s defenses. The 1983-86 Frtiz Shurmur 3-4 defenses are represented.
The 1991 Jeff Fisher Bear-front defense is 10th, which is surprising, but that group could stop the run but could get no pass rush and the coverage was lacking due to that. Both the 1999 and 2001 Super Bowl defenses are there, with the 2001 defense led by Lovie Smith.

The 2013 defense is the most recent, other than the 2019 Wade Phillips iteration. That 2013 defense was led by Robert Quinn and Chris Long and James Laurinaitis.

With nine games left it isn't right to put the 2019 Rams defense in the pantheon of Rams run defenses just yet but we will see where this goes. We think a stout run defense goes a long way in helping prevent points and making teams, even more, one dimensional that they want to be and will allow Donald to rack up sacks and Ramsey to make bid plays in coverage.

We'll follow this and update it in January.
Posted by John Turney at 9:31 PM