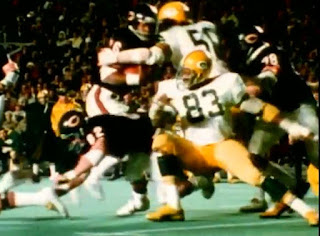 In 1973 the Green Bay Packers wore black turf shoes when they played on Astoturf of Tartan Turf and Polyturf (three of the turfs available at the time).
In 1975 they all wore white, kind of the usual thing in that era.
But for one glorious year, 1974, the Packers wore mostly gold shoes on turf. And it was great. Not all the players had gold shoes (some whore black or white) but the majority did wear the gold.
What we don't know is what they would have worn if they played a team (like Dallas) who wore white at home. Would they have worn the gold shoes with the green jerseys? Unknown.