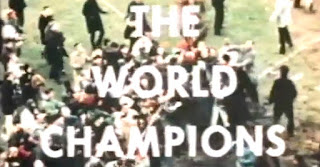 Yesterday PFJ had a short post on the success of Elbert Dubenion and his impressive yards per catch stat. On that list was Paul Warfield, and he is part of the story of the day. 55 years ago today the Cleveland Browns were crowned champions for the last time.

My morning coffee, and another review of the film of the Browns vs. Colts is always enjoyable to watch from a strategy point of view. Blanton Collier replaced a legend at the University of Kentucky in 1954 (Bear Bryant), and he now was in his second year having replaced another legend(Paul Brown).

The Browns in '63 were the first team in league history to begin a year 6-0 and not earn a playoff berth(don't count the play-off bowl). Cleveland added a dimension to the roster in '64 that was sorely needed; that of a game-breaking receiver that could stretch the field DEEP.

That man was one of my receiving heroes—Paul Warfield.
Collier studied the Colts strong defense in preparation of the championship game against one of his former assistant coaches Don Shula, and with the scored tied 0-0 at the half he unveiled his half-time adjustment.

Cleveland would attack the Colts on their vulnerable right side (Namath would do the same four years later). Almost all teams played man to man coverage or strong zone to the two receiver side; called "cloud or sky".

Collier noticed that right safety Jim Welch had "rolled" weak to help  Lenny Lyles against Warfield. Cleveland is now ahead 3-0 after Jim Brown on a flare pass to the left set up Groza's field goal. The Browns are in pro left with running back Ernie Green (a willing and strong blocker) lined up as a wing left. Single back set and toss to Jim Brown going left.
Left tackle Dick Schafrath pulls as tight end Johnny Brewer blocks down. Green blocks the first man he sees; which usually would be the right linebacker, but Shinnick has moved inside to the c-gap to blitz.
Behind excellent downfield blocking Brown gains 46 to the Colt eighteen yard line before left safety Jerry Logan makes the tackle. Logan is aligned in the middle of the field when Welch rolls weak. Time to strike—Baltimore again is in roll weak coverage and as such Collins can easily get inside of left corner Bobby Boyd as Frank Ryan's pass goes under the crossbar and hits Collins in the chest for the first touchdown of the game.
Cleveland controls the ball and the clock as Brown gains over 100 yards rushing, and Frank Ryan gains 173 yards on seven of his completions (all of them 13 yards or more). Jim Welch became the Colts right safety in 1962 after three different men had started at that position over the course of the three previous seasons.

Welch has experience yet he is by far the weak link in the Baltimore secondary. Watching the title game clash he is virtually non-existent in helping stop Brown when he runs, and he is nowhere to be seen on the pass completions by Ryan. Collier by his offensive alignments and the presence of Warfield has made Welch a non-factor.
On the second touchdown by Collins, Logan arrives way too late to stop the deep seam streak as again Gary easily got inside of Boyd who believed he had help deep in the middle. The third score was a perfectly thrown ball by Ryan to a tall receiver who positioned himself to take advantage of a shorter defender (Boyd).

Paul Brown had called Blanton Collier a "scientific football man", and the Millersburg Kentucky native sure lived up to that moniker on December 27th, 1964. The 2019 NFL regular season will come to a close this Sunday with a handful of meaningful games.

There are teams that are just not playing cohesive team pass defense; what I call the "SLOPPY SIX". Washington, Detroit, NYG, Miami, Oakland, and the porous Cardinals all have a defensive passer rating of at least 100. Since Dallas, Green Bay, and Philadelphia all need victories and have quarterbacks cranked up and ready to shred three of the Sloppy Six you might see the ball in the air plenty Sunday afternoon.
Posted by TJ Troup at 7:12 AM