LOOKING BACK
By Chris Willis, NFL Films
On Friday the NFL's 100th All-Time Team will wrap up with the selections of the ten quarterbacks. As we prepare to see the final selections, I came across another older All-Time Team article, this one done in 1990 by Ray Flaherty, the former Hall of Fame coach and two-way end.

His choices were very different since he selected a good mix of older and newer players when he choose the team in 1990. Flaherty picked old-timers he played or coached against, like Mel Hein, Don Hutson, Mike Michalske, Cal Hubbard and Clarke Hinkle; while selecting more modern players like Joe Montana, Steve Largent, Ronnie Lott, and Lawrence Taylor.

The other more unique aspect of this all-time team was that Flaherty choose both an offense and a defense- as he choose Hinkle at linebacker and Hubbard at def. tackle. Usually individuals who played or coached during the two-way era picked one team with 11 men. Not Flaherty. He went with 22 men and one punter and one kicker. 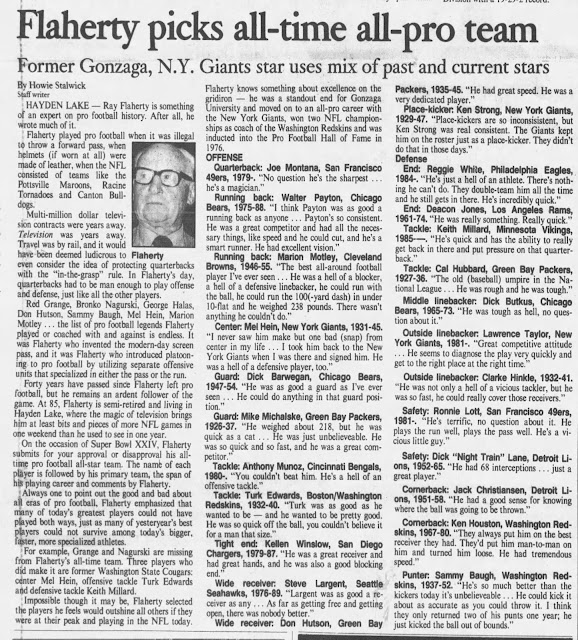