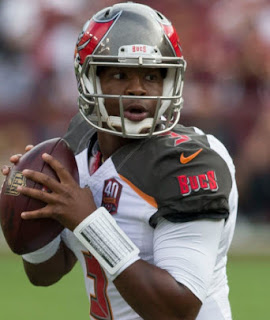 With the last throw of his season (career?) for Tampa on Sunday Jamies Winston simultaneously accomplished two related amazing feats. Much has been made of Winston nearing the 30-30 club, the first QB to throw 30 TD’s and 30 Interceptions in the same season a feat he accomplished but not without tacking on 5 extra minutes after the season was supposed to end!

The same play was returned by the opposing Falcons for a Touchdown meaning that in what soccer fans might think of as Stoppage Time Winston set the NFL record for the most ‘Pick-sixes’ in a season in NFL History.

Winston broke his tie with future HOFer Peyton Manning and long-forgotten Rudy Bukich who had each thrown 6 pick-sixes in 2001 and 1966, respectively.  With his 7th pick-six, Winston now stands alone atop a leaderboard he’d probably rather avoid.

We initially thought Winston might have a third accolade as he leads the league in interceptions by a historically wide margin of 9, however, the INT margin-of-victory throne still belongs to Brett Favre who threw 29 in 2005, 12 more than his runner up. It took Brett another two years to get run out of Green Bay, how much longer does Jamies have in Tampa? 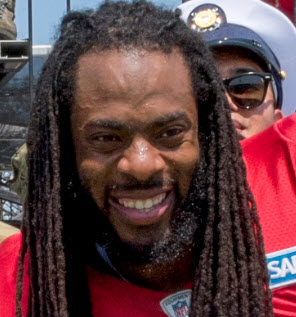 Richard Sherman had an excellent game Sunday night supporting his 49ers path to their best season in years largely on the back of a rebuilt defense. Sherman was excellent all season and lead the NFC in Passer Rating allowed by a cornerback for the 3rd time—having previously accomplished the feat in 2012 and 2013.

This season, apparently fully recovered from his ACL after a year getting his feet back under him Sherman allowed a rating of just 46.8 according to PFF. Now different sources track passer rating against and the results are not consistent, but Sportradar which tracks for PFR’s advanced metrics also has Sherman leading the NFC, albeit with a less impressive rating.

Passer rating against can be tracked using various sources back to 1995 and in those 25 seasons only two other players have led their conference in defensive passer rating allowed three times; Deion Sanders and Darrelle Revis, good company Richard!

Congrats to Shaq Barrett, No thanks to the scorekeeper 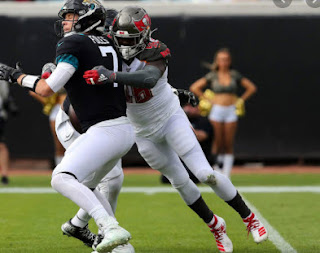 With three sacks yesterday Shaq Barrett passed Chandler Jones to claim the sack title with 19.5 versus Chandler’s 19.0. We still think Chandler was the better all-around player but sack titles (now given the Deacon Jones Award) are a nice thing to have on your mantle.

Shaq owes his title to a creative scheme designed to free him up, a resurgent season where he came back in great shape seemingly with a desire to show the Broncos what they’d lost, and to a scorekeeping change after the Bucs Week 14 game versus the Colts.

As the game was played and with the initial publishing of the gamebook Barrett shared an 8-yard sack with defensive end William Gholston. However, as happens every week, games are reviewed and the league and Elias updates its official tallies; and in mid-week, the half-sack for each Barrett and Gholston was revised to a full sack for Barrett with Gholston losing all credit.

Barrett it seems may owe his accolades to more than just scheme and fitness. Frequently the impetus for these changes comes from the team itself; if a team believes a play was miscredited it will often ask for a review, so we may never know who truly deserves the credit.

Either way, a great breakout season for Shaq Barrett and a deserving runner up for Chandler Jones.

In an associated story, it was accurately reported that a week 16 stat change pushed Markus Golden of the Giants over the 10-sack mark earning him a performance bonus. Left out of this story was the fact that the half-sack he gained with the week 16 adjustment was taken away with an earlier full sack that he had ‘adjusted-down’ to a half-sack at Detroit where Dexter Lawrence was credited with half a sack.
Posted by John Turney at 6:40 PM