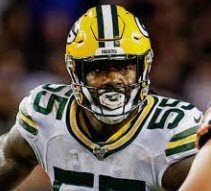 Last night Za'Darius Smith had a dominant game versus the Vikings in a big win for the Packers,. Smith totaled 7 tackles, 3.5 sacks and 2 run stuffs and 9 total pressures.  That performance light a fire under some Twitter uses that Smith should be in the Pro Bowl.

It's a fair point. The issue is not that Smith was or wasn't worthy—he was it's just that his biggest game came after the voting.

(Shaquil Barrett and Chandler Jones' Pro Bowl spots seem secure so we are focusing on Mack.)

Mack had a sack this weekend and Smith had 3.5 and a ton of pressures. So while it was perhaps a close call when the voting ended, it was no longer.

To be fair, and nothing against Smith, most folks, if asked who they would rather have as their rush backer would pick Mack. And Pro Bowl voters likely thought similar thoughts—at least some of them.

However, the Pro Bowl is thought (not in all cases) to be a reward for the players having the best season that particular year. But the timing of the voting has sometimes created issues similar to the Za'Darius Smith situation. The voting is done after 14 games, not 16. Sometimes it was done after 15 games rather than 16. In any case, a player who has a strong finish to the season can get overlooked for the Pro Bowl.

Our best guess is that voting is closed with a couple weeks left in the season as a way to promote the game and the players chosen. That way TV announcers can say, "Such-and-such is going to his first Pro Bowl or such-and-such was named to his fourth consecutive Pro Bowl" in the final couple of weeks of the season.

Of course, there could be some practical reasons as well.

Regardless, late-season explosions are not ever counted. Here are a couple of examples.

In 1987 Richard Dent missed the Pro Bowl. having 8 sacks when voting closed but had 4.5 sacks in the season finale taking his total to 12.5 sacks—among the best in the NFC.

The 1995 season was a big one for wide receivers with several of them having huge numbers. Isaac Bruce ended the season with 119 catches 1781 yards for a 15.0 average and 13 touchdowns. But 24 catches for 278 yards occurred after the voting ended. Certainly, his late-season surge would have been a difference-maker in the voting if the voting occurred after 16 games, not 14.

Why does this matter?

Well, good question. I may matter in terms of bonuses for the players. But the bigger thing is at the end of the career, especially when Hall of Fame considerations are being evaluated it can make a small difference.

Kevin Greene waited a while to get in the Hall of Fame, especially for someone who was 3rd All-time in sacks. Would the 1988 Pro Bowl have made a difference? Does six Pro Bowls rather than five make a difference? Same with Ike Bruce, does five Pro Bowls sound better than four?

Hard to know. We try to point out such seasons when we discuss the Hall of Fame and the honors of players. Frankly, we try and point out Pro Bowls a player didn't likely deserve, either.

That is why we take an "All of the Above" approach to the postseason honors and not a "Pro Bowl-centric" approach or the rediculous "AP only" approach. (The AP only approach is a false theory that the Associated Press is the official NFL All-Pro team—it is not).

But looking at Pro Bowls closely (who unfairly missed one or who got one they didn't deserve) and also the AP, PFWA, NEA, UPI and PFW All-Pro teams from first-team down to honorable mention we can get a sense of the seasons any given players was "above the line" of being an average.

Doing that is much more telling than just counting Pro Bowls or just the AP All-pro teams. That way, when something like this Za'Darius Smith situation occurs the rest of the gathered information can complete the picture.