How Much "Flanker" Did Elroy Hirsch Actually Play? 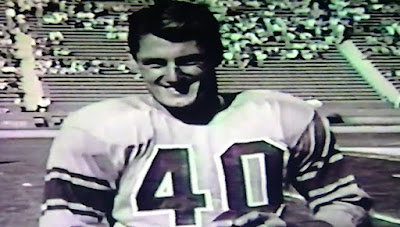 If the accidental "leak" is accurate then Elroy "Crazy Legs" Hirsch made the cut as one of the top 10 Wide Receivers in the history of the game by making the NFL 100 team.

One of the talking points that gets thrown around is that Hirsch "pioneered" or "invented" the flanker position—a wide receiver outside of the tight end, off the line of scrimmage.

Literature of the day reports that Curly Lambeau, in 1936, split Don Hutson wide and flanked Johnny Blood outside the right end, making him a flanker.

With Hirsch, it's complicated. He was voted the top flanker in NFL history in 1969 as part of the NFL's 50th Anniversary. Often you will find factoids like this "Hirsch was a key part of the Rams' revolutionary "three-end offense"  . . . (and was) the pro game's first true flanker".

When Hirsch passed the Chicago Tribune reported, ". . . Hirsch then moved onto to the Los Angeles Rams of the NFL, where he became the game's first true flanker."

Hirsch began his career has a halfback in the AAFC with the Chicago Rockets. There he suffered a very severe head injury and ended up with the Los Angeles Rams in 1949 where he also played halfback. He carried the ball 68 times and caught 22 passes but only on occasion did he motion from halfback to flank and end. PFJ's TJ Troup is clear about that 1949 season from his extensive film study.

Troup's film study revealed that Hirsch was the starter the first half of the 1949 season and then got benched later in the year "because he wasn't running hard between the tackles". The Rams ends that year were Tom Fears (left) and Bob Shaw (right). And when Shaugnessy would motion a halfback it was usually guys like Vitamin Smith or Tommy Kalmanir.

Rams head coach Clark Shaughnessy would often flank a halfback outside the end, creating a flanked halfback, but usually, not always, it was done through motion. Sometimes, yes, the formation did have Hirsch flanked outside with an end tight on his side of the formation, but it was, according to Troup, not nearly as often as the halfback motion to the flank concept.

From the 1949 Championship game (in which Hirsch played little). 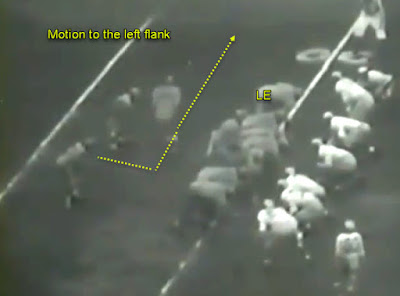 In the above shot, one of the backs, motions to the left of the left end, who is on the line of scrimmage. To the far right (not in shot) is the split right end.

Here are the Eagles, against the Rams in 1949 doing a similar thing. Steve Van Buren motioning from left halfback to the flank the right end (Pete Pihos). But no one calls him a flanker. Film study shows he did this more than Hirsch did in 1949. 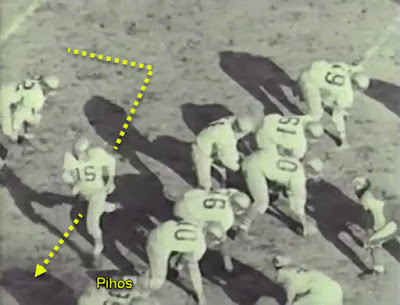 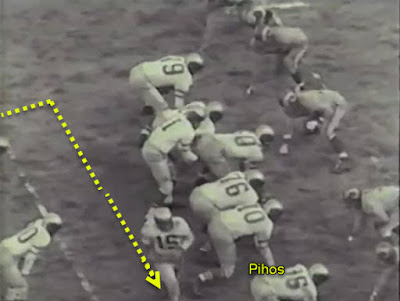 In 1950, Shaughnessy was gone. And the Rams still used the same concepts, but Hirsch was the right end, and the halfbacks would flank out, left or right.

Here, the right halfback motions to the flank. 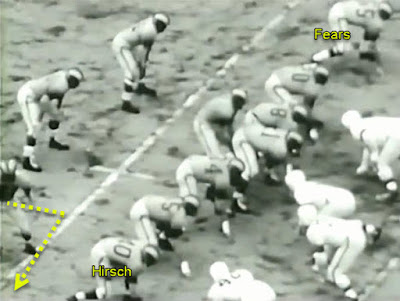 In 1951 things remained the same. Here Hirsch at his usually right end spot is flanked to the outside by one of the faster backs Vitamin Smith, Tommy Kalmanir, Glen Davis or speedster end Bob Boyd. 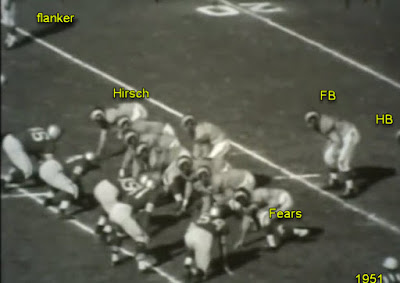 Also 1951, with the same concept only this time it's Tom Fears who is flanked. 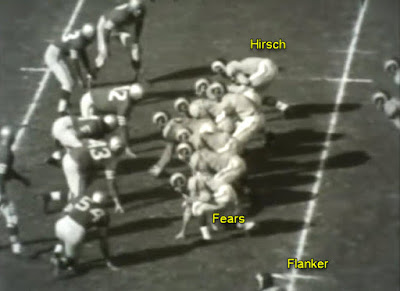 Here is the motion concept with Glen Davis motioning to the flanker spot outside Hirsch. 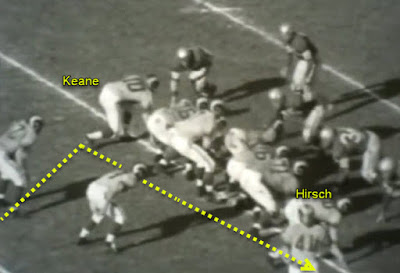 According to Troup, Ram coach Joe Stydahar was cribbing from the early 1940s Bears offenses that often flanked a running back via motion (Joe Stydahar played for the Bears in that era). It was nothing new vis-à-vis Shaughnessy in 1949.

Washington had Wilbur Moore who Troup considers one of the two or three real pioneers of the flanker spot. Moore played halfback for the Washington (who asked all the backs to motion at times) and in 1943 caught 30 passes for 537 yards for a 17.9 average and seven receiving scores.

Troup remarked, "If you couldn't motion to the flank you didn't play running back for the Redskins in the 1940s".  Note: Clark Shaughnessy was an advisor to Washington from 1944-47.

So, film study shows the Rams motioning a back to a flanker position was not new to the NFL in 1949 and Hirsch was not part of that in any real way. In fact, in 1948, Tom Keane has a big day receiving when he was that motion halfback. So, whatever happened with Hirsch in 1949 already happened in 1948.

So, back to our timeline.

Here is 1952. Fears was the left end and Hirsch the right and when there was a flanker it was one of the backs who'd motion out. Not any changes we could discern from 1951. We are looking for a better shot but we're confident this was typical. The player who was the "third" end was #89 Bob Carey and he'd play tight and would play both sides, left or right. 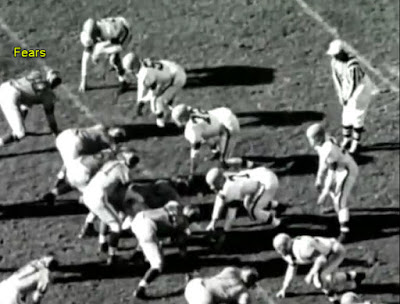 In 1953 we see this, with both Fears and Hirsch split. But in this case (as it was in 1952) Fears is the flanker and Hirsch the split end. If the end  were at right tight end Hirsch would be the flanker and Fears the split end. So, in this case Hirsch did play flanker but was it full time? No. Was it a pure flanker? Well, yes, to the extent the tight end was to the right, but Fears also was a flanker plenty as well.

With injuries to Fears and Bob Carey was in the military Bob Boyd got his first real playing time setting up his monster 1954 season and a wide, wide end. 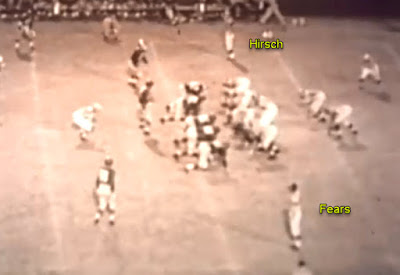 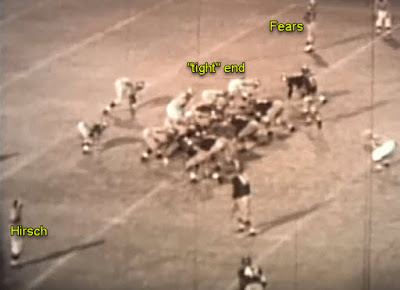 In 1954—Hirsch in the slot he did this a lot.  On the outside was one of the smaller, quick running backs—often Skeets Quinlan or Vitamin T. Smith. From what we've seen there was less use of a dedicated tight end than in 1952 and 53. 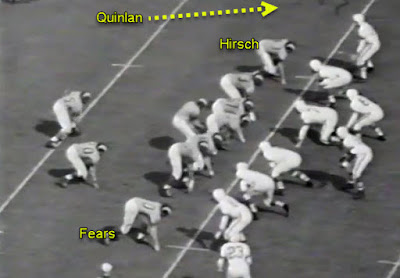 Same deal, but the ends on different sides but there is a flanker outside Hirsch. 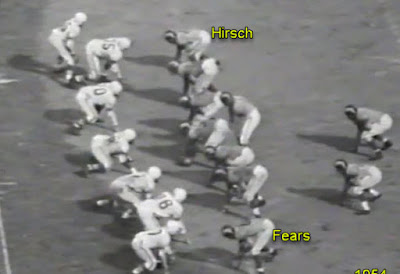 Here we see Hirsch in the slot with Boyd outside him and Fears at the left end. 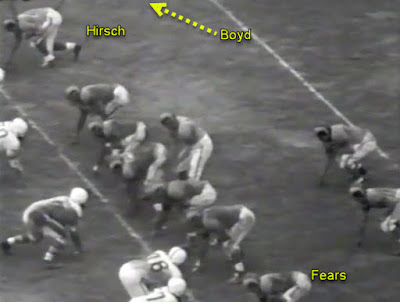 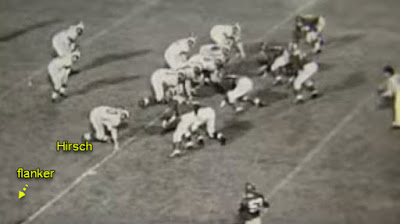 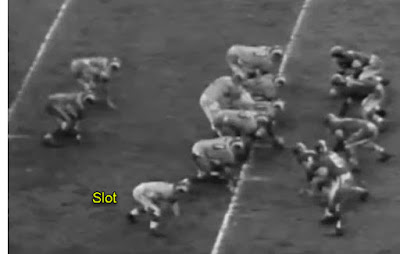 Here is a view from and end zone camera. Hirsch is slotted, Boyd between the numbers and the sideline. Now that is a split end.

This is 1955 in color. The Rams had a new coach (Sid Gillman) and there were changes, though the concept of a split end, slot end and flanked end continued.

Here Hirsch is the left split end, Fears in the right slot and Skeets Quinlan is outside the numbers to the right. 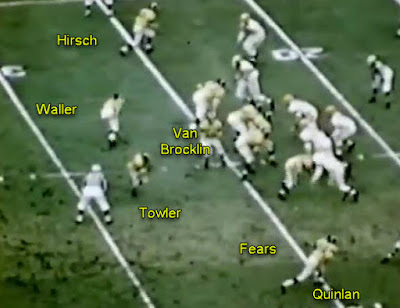 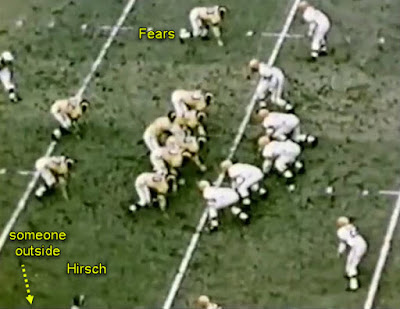 Here Hirsch was out, Ron Waller is filling in for him, in this case, he would have been the flanker. 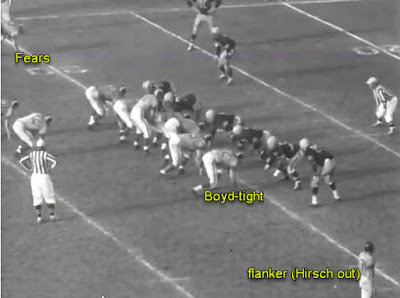 In 1956 Hirsch was generally the right end, and would play split end when the tight end was left and was a flanker when the tight end was right. However, there are times on film you can see Hirsch as the split end on the left—remember Tom Fears was hurt most of the year and played only two games so his left end slot had to be filled and sometimes Hirsch did it, but so did others. A fair among of the time Leon Clarke was the tight end and the left end was usually Bob Boyd. 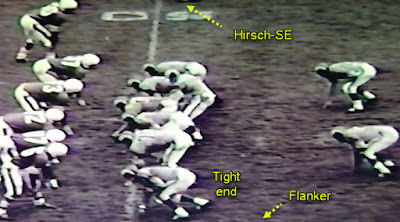 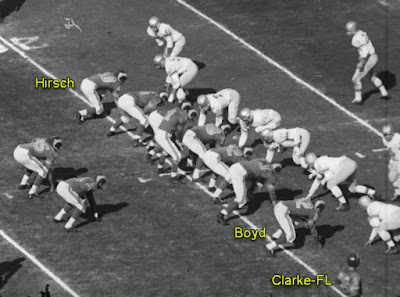 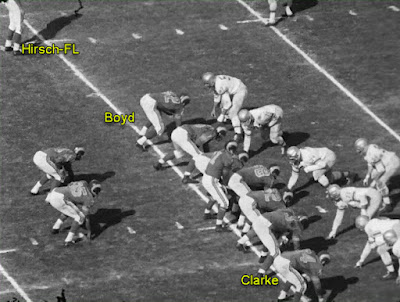 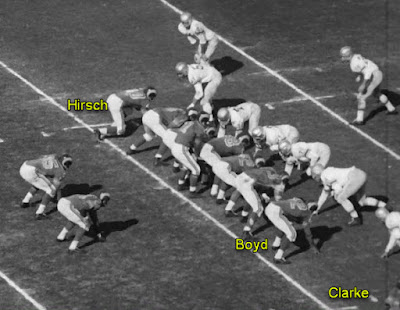 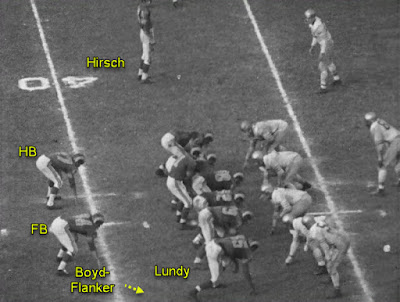 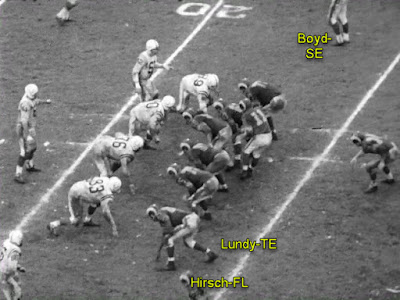 So, we think we've illustrated this issue enough for folks to see what the film shows. If you think a "first flanker" or a player who "changed the game" by "pioneering" the flanker position is someone who was a flanker based on whether the strength of the offense was left or right, then yeah, in  1952 and 1956 and 1957 Hirsh was a flanker. Other years he was more of a slot or a right end that was tight.

If you think a "pure flanker" is someone who is always on the two receiver side, or strong side, then Hirsch was never a flanker. He was more akin to a Lynn Swann or Marvin Harrison who were on the right side of the formation and played both split end (X) and flanker (Z).

Other receivers like Henry Ellard and Torry Holt (both Xs) and Isaac Bruce (Z) were the ones who flopped sides to stay on the proper side of the formation to maintin their 'X' or 'Z' spots.

We've asked TJ Troup, who has seen more film from this era than anyone we know (1949 especially), the basic questions.

Here are those key questions.

How would you assess this statement—
Elroy Hirsch was the pro game's first true flanker.

We don't do this to take anything away from Hirsch. We post this to show that sometimes legends become "facts" and those "facts" can influence how people vote for All-Time teams or how they write about the NFL and NFL players.

The correct information for this kind of thing is usually out there and as in all things, people should question official stories. If you can check out the film of players that someone makes an extraordinary claim about. Make sure they have their facts in order. Sometimes they do.

Sometimes they do not. This is one case where the claims made about Hirsch changing the game or being the first flanker are flawed at best. We just wish there was demand for these kinds of claims to be researched and then we could all learn.

The NFL needs to pay Troup to put his knowledge down on paper, he is the answer man for this era. For the pre-WWII era we'd go with Chris Willis of NFL Films.
Posted by John Turney at 4:09 PM