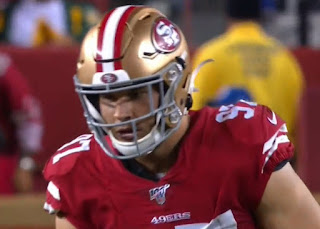 Bosa is a lock for Defensive Rookie of the Year, has excellent shot at being First-team All-Pro, is probably a lock for the Pro Bowl as well. He's having one of the best seasons ever for a rookie defensive end.

He is not tearing it up in terms of sacks, but in impact—QB knockdowns, hurries, drawing holds, he is tearing it up. He has 38 tackles, 8sacks, 7 run stuffs, and a pick. He's not made as many "splash" plays in the last few weeks he did earlier, so we will see if he picks it up or maybe has hit a "rookie wall" but either way, it's been a very good rookie season. But, if he returns to mid-season form it could go down as one of the top few rookie seasons for a d-end ever.

Who are the others you should know about? 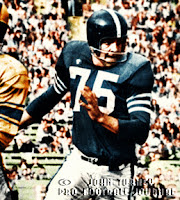 Only a few of the '52 Dallas Texans films remain. But those few show a rookie Marchetti who was already a star player. One game versus the Giants he had three sacks, one of them coming with his shoulder in a harness. He was honorable mention All-Pro, which is a pretty high honor considering he was unknown at the time and playing on a poor team. PFJ's Nick Webster is confident if there were complete films/and or play-by-plays that Marchetti would have tackled passers in the low double digits. 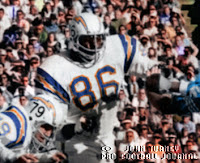 Faison was All-AFL, deflected 11 passes, picked off two passes in his rookie season of 1961. He was huge for his era (6-5, 270-defensive tackle size) but could run (5.8 fifty-yard time). We don't have a great sack count and even if the play-by-plays were more complete it's likey he didn't have more than a handful, but he was very impactful in terms of pressures and against the run. 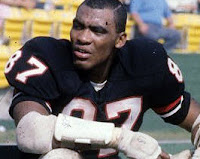 Big Claude had 11½ sacks as a rookie and also forced five fumbles. 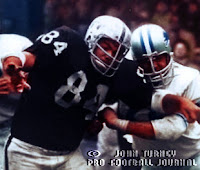 Cline took over the left defensive end spot for the Raiders in 1970 for Ike Lassiter, a player who averaged 14½ sacks from 1967-69, and recorded 17½ sacks of his own. He would also stand up as a linebacker some when the Raiders wanted to show a 3-4 front with the same personnel they used in a 4-3. 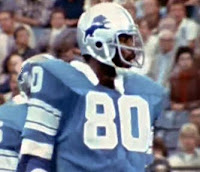 His 23 sacks and 71 tackles were remarkable for a rookie. Baker was All-Pro, Defensive Rookie of the Year, a Pro Bowler and got some Defensive Player of the year Award votes. The 23 sacks is an unofficial NFL and NFL Rookie record (sacks became official in 1982). 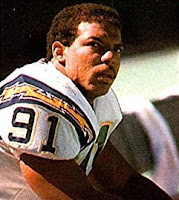 O'Neal blew out a knee late in 1986 but was having a stellar rookie year at right end. He totaled 12.5 sacks and played like a veteran with his use of hands and ability to use leverage to beat the good left tackles he faces. In a lot of ways, Nick Bosa reminds us of O'Neal in terms of pass rush skills and techniques being more like a vet than a usual rookie. 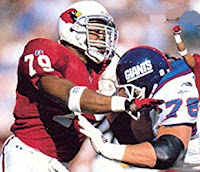 Rice had 12.5 sacks in his rookie season and was Second-team All-NFC as well. 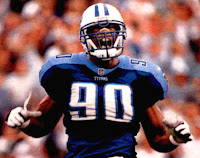 The "Freak" had 14.5 sacks and was credited by the NFL with 8 forced fumbles, but the titans credited him with 10. The Titans were right. Back then, the NFL chart keepers, if they couldn't tell who forced a fumble just left it uncredited. Now, they are more diligent and try to find who forced a fumble by review the film. We are confident that Kearse forced ten that year. 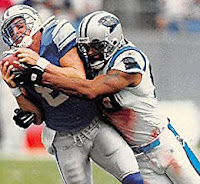 Peppers had 12 sacks, five forced fumbles deflected six passes and had a pick in twelve games.  Peppers was suspended in November of 2002 for using a banned substance in a dietary supplement. He played in three games afterward while appealing the decision but decided to drop his appeal. A full season would have put him pretty high on any rookie defensive end list. 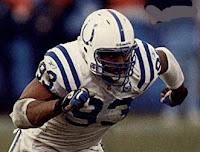 Freeney had 13 sacks and nine forced fumbles and 9 run stuffs (his career-high) as a rookie. 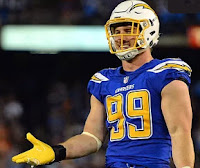 As a rookie Nick's older brother had 10.5 sacks in 12 games after a holdout that caused him to miss the first month of the season. He was skilled as a rookie, like O'Neal and now his younger brother, he would have been more productive will a full camp and the month of the season he missed.

There are a few other rookie seasons that were also good, that maybe deserve honorable mention—Lionel Aldridge, Bill Stanfill, Fred Dryer, Lyle Alzado, Gary Burley, and Darren Howard among them.

Note: Reggie White was excluded because his rookie season in pro football was in the USFL.
Posted by John Turney at 3:47 PM