Come on Guys—You Can Do Better Than This 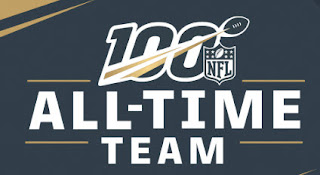 Looking through Twitter this morning there was a Tweet with a link to a podcast that purported to have a take on the NFL 100 team, so I dutifully followed.

In it, Dave Dameshek and  Matt "Money" Smith had these thoughts on the subject.
Dameshek aired his views that Dutch Clark and Bill Hewitt shouldn't be on the All-Time team and that the NFL was a "minor league sport".  Smith, while supposedly agreeing with Dameshek actually stated the exact reason players like Clark and Hewitt (and there will be others) should be on the team.

Sometimes people get going on a take or rant and actually undermine their whole premise. You see, everyone who follows football knows of the evolution of the game and that the players of the 1920s, 1930s, and 1940s and so one couldn't play today.

This guy knows that— 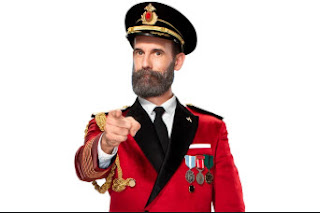 But the NFL's point of having an All-Time team is to celebrate the history of the game and honor those who have come before and that is done in the context of rating players in the era they played, i.e. "All those guys could do is play in their decade and absolutely dominate". Thank you, Mr. Smith.  My point exactly.

Of course, I have some quibbles with the All-Time team selections made so far, but I certainly have no issue with Clark or Hewitt or Mel Hein who will likely be one of the centers and others.

It gets kind of old hearing the same, tired complaint by those who know little of the pre-WWII era. That complaint is "those guys couldn't play today". It's just something we all know, especially those who have taken the time to study the era and even watch what film is available.

Actually, I would like to see a discussion about taking Peyton Manning or Tom Brady back to, say, 1960. Have them contend with blockers who could not extend their arms. Defensive linemen could beat the crud out of the helmets of the blockers, and then hit the quarterback from the top of his head to the bottom of their feet and get to hit them hard.

It would be fun to see them contend with the fact their receivers could be "axed" on the line of scrimmage. And their receivers could be bumped after five yards and until the ball was in the air. And on those crossing routes they run with impunity? Nope. They are not there because it the receivers would be in the hospital after the first couple. And if a defender gets close are they are rules for intentional grounding? No. If you ground your ground, no out of the pocket or back to the line of scrimmage.

Sure, the defenses would be less sophisticated but it would be a tough game because the protections given to the quarterbacks and receivers would be gone and much of what teams can do now couldn't be done then. So, to a smaller degree, the "could play today" works both ways. Again, to a smaller degree. And that is not even asking if Manning or Brady could play both ways in the "iron man" era.

Heck, how about this? Eric Dickerson, Earl Campbell, and Barry Sanders are three of the best running backs ever. Bar none. But, could they play today? In an era that does not value pure runners? They were awesome, off-the-charts runners. But none could help you on third down. They were average or fair to poor pass blockers. Fair, to average, to poor pass catchers. Sanders had to be taken out on goalline quite often. What about that? And some of them fumbled a lot. Too much to be able to stay on the field today.

So come on Mr. Dameshek and Mr. Smith it is far more complex to choose an All-Time team than you are suggesting and one cannot just rattle off the names of players from their favorite team on the one hand and then rip the Blue Ribbon Committee choices for honoring pre-WWII players on the other.

Again, criticizing a choice here or there, fine. But dismissing a class of players because they "couldn't play today" is silly. They are part of the game and they dominated in their era the way LT dominated his era.

Put your backs into it, study the subject, then comment. If you do that then your comments can be taken seriously.

The bottom line is the members of the NFL's 26-person blue-ribbon panel are doing a great job. And the presence of Clark and Hewitt are the proof of that good work.
Posted by John Turney at 10:30 AM