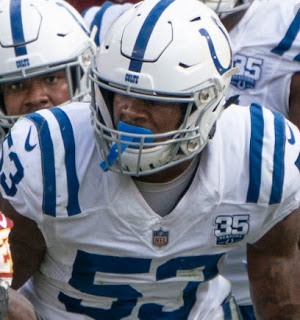 Darius Leonard picked off his fifth pass of the season today and when coupled with his five sacks he became the fourth linebacker since 1982 to have five (or more) of each.

Of course, this is since 1982. There are others who achieved it before sacks became official. Oddly, a couple of them are Colts. Stan White had 8 sacks and 7 picks in 1977 and 6½ sacks in 1975 to go with his 8 picks. Ted Hendricks had 5 sacks and 5 interceptions in 1971. Mike Curtis also had a five-sack five-pick season (1970).
Tom Addison of the Patriots had five unofficial sacks in 1962 and he also had five interceptions.Note that a small handful of defensive backs have done this as well.

Leonard missed a few games midseason, playing in a total of 13. So, it's quite an achievement to do it in that few games. All the rest did it in 14 or more.
Posted by John Turney at 7:44 PM