When compiling my list of the Top 100 Pro Football Books of All-Time I had just a few criteria that I kept to. Of course the book had to mainly be about pro football, so sorry no Friday Night Lights. I also took consideration the research, the writing, the historical impact of the book, and if you should permanently own it in your football library. All 100 books here met these criteria. Over the next five days Pro Football Journal will count them down. Here are numbers 100-81.

100) Rockin' the Rockpile: The Buffalo Bills of the American Football League by Jeffrey Miller (ECW Press, 2007). Very readable and an in-depth look at the early years of the Buffalo Bills while they were a member of the American Football League. More of a reference book, Miller includes everything you would want to know about the Bills of the 1960’s. 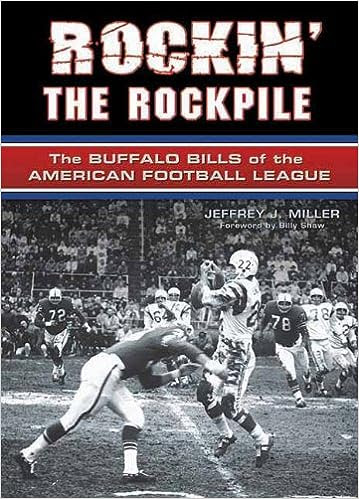 99) My Life with the Redskins by Corrine Griffith (A.S. Barnes, 1947) Interesting memoir written by Corrine Griffith, the wife of Washington Redskins owner George Preston Marshall and published in 1947. Griffith, known as the “most beautiful actress of the silent screen” writes about her relationship with her husband Marshall (who she married in 1936), as well as her involvement in writing and producing the Redskins famous fight song, “Hail to the Redskins.”

“The only reason for writing this book is that the events related are true which in itself makes it stranger than fictionAny resemblance of the characters in this book those same characters in real life is not . I love – it seems I married one.” from of My Life with the Redskins.

97) Crash of the Titans: The Early Years of the New York Jets and the AFL by Bill Ryczek (Total Sports, 2000). Filled with great anecdotes and oral history from former New York Titans-Jets players (nearly 50 interviews) from the early years of the franchise Bill Ryczek a very entertaining story of a team that never has any dull moments. The stories of -Jets first owner Harry Wismer are some of the best anecdotes. 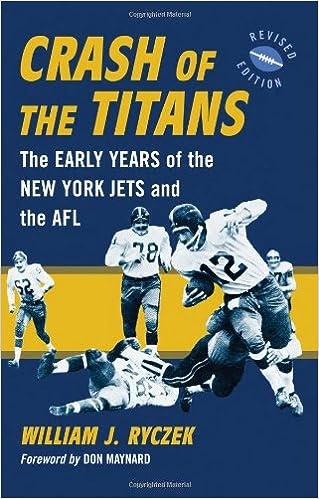 96) The $1 League: The Rise and Fall of the USFL by Jim Byrne (Prentice-Hall, 1987). The best book written about the USFL. Written by Jim Byrne, former Director of Communications for the USFL, The $1 League tells the story of the short-lived United States Football League. Sports author Jeff Pearlman is currently working on a book about the USFL, will see if he can top Byrne’s effort.

95)  Monday Night Mayhem: The Inside Story of ABC’s Monday Night Football  by Marc Gunther & Bill Carter (Beech Tree Books, 1988). A behind-the-scenes book at the beginning and growth of Monday Night Football. Written in 1988 by Marc Gunther of the Detroit Free Press and Bill Carter of the Baltimore Sun, the two newspaper men conducted interviews with over 100 individuals in television, including Arledge and Howard Cosell to explain the phenomenon of MNF and when the Gifford-Cosell-Meredith trio were at their all-time high.

94) The Birth of Football's Modern 4-3 Defense: The Seven Seasons That Changed the NFL by T.J. Troup (Rowan & Littlefield, 2014). Football Historian T.J. Troup presents an informative work on the seven NFL seasons in the 1950’s that helped redefine defensive football in the NFL. Troup’s use of watching NFL game footage to help with his research makes for realistic conclusions. 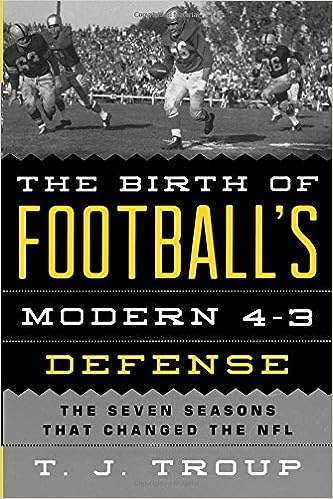 93) Coach: A Season with Lombardi by Tom Dowling (W.W. Norton, 1970) In 1969, after one year of retirement, Vince Lombardi couldn’t stand being away from coaching. He returned and became head coach of the downtrodden Washington Redskins. They were the Redskins who had Sonny Jurgensen - the paunch with a golden arm - and a lot of other good guys who seldom won. It was a typical Lombardi frontal assault on an impressive challenge. He was the man who had won more games, more championships, and more awe than any other man in football. The stories held that he was a brutal, ego-busting, driving disciplinarian - and in part he was. He was no paper lion; he was the real thing. Tom Dowling joined Lombardi at training camp and lived with him and his players throughout the long, painful, dramatic season. Lombardi emerges as everything everyone had been saying him and something much more. Shortly after the release of the book Vince Lombardi died.

92) They Call it a Game by Bernie Parrish (Dial Press, 1971) One of the first -biographies that told the “true-story” of how the game was played and the behind-the-scenes labor in the NFL. Former Cleveland Browns defensive back Bernie Parrish (who was a member of the Browns 1964 championship team) reveals in detail on how the “pro football establishment manipulates and protects its billion dollar monopoly at the expense of the players and public.” Parrish also makes claims that some NFL games were fixed, but never provided concrete evidence to back his claim. In 1971 this book shocked readers and definitely worth reading in 2016. 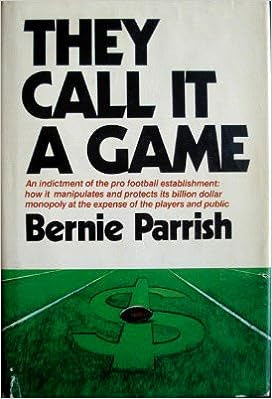 91) The Future is Now by William Gildea and Kenneth Turan (Houghton Mifflin, 1972) An inside look at the mind and antics of Washington Redskins Head Coach George Allen. Published the same year (1972) Allen would lead his team to the Super Bowl, The Future is Now readers a look at what Allen did to revamp his team, by making trades, and building a great squad on the cusp of winning it all.

90) The Best Show in Football: The 1946-1955 Cleveland Browns-Pro Football's Greatest Dynasty  Andy Piascik (Taylor Trade Publishing, 2007) If you want to learn about one of pro football’s greatest dynasties then read The Best Show in Football. Author Andy Piasick reveals some unwritten research and numbers to back up his argument about a team that played in 10 straight championship games – winning seven of them. At the end of the book Piasick presents the Browns case against other dynasties including the Bears of the 1940’s; the Packers of the 1960’s; the Steelers of the 1970’s; and the 49ers of the 1980’s. The Browns dynasty of the late 1940’s to the mid 1950’s is well worth the read. 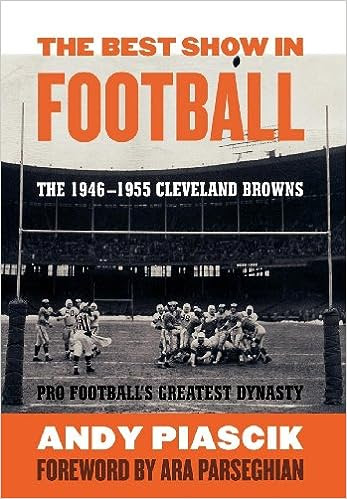 89) Curly Lambeau: The Man Behind the Mystique by David Zimmerman (Eagle Books, 2003) The only biography written about the Packers founder and legendary coach Curly Lambeau. Well researched, David Zimmerman tells the unique story of the man behind the Packers success in their first forty plus years in the NFL. Not only does Zimmerman give you a front row seat of his success, he also does a good job explaining his failures too – like his sad good-bye from the Packers and his three failed marriages.

88) The Blind Side: Evolution of a Game by Michael Lewis (W.W. Norton Co., 2006) The New York Times best-selling book might be a little low on my list. I enjoyed reading it, but didn’t love it. The author of Moneyball, Michael Lewis, writes about the evolution and importance of the left tackle. The book spawns a movie about Michael Oher, who at the time of the book was a prized prep player who would eventually get a scholarship to the University of Mississippi.

87)  The Games That Changed the Game: The Evolution of the NFL in Seven Sundays by Ron Jaworski with David Plaut and Greg Cosell (Ballentine Books, 2010) With help from NFL producers David Plaut and Greg Cosell, former NFL quarterback and current ESPN analyst Ron Jaworski goes into detail of seven unique NFL games that truly influenced the way the NFL is played on the field. The seven games/events include Sid Gillman’s Vertical Stretch (1964); Bud Carson’s Cover-2 Defense (1974); Don Coryell’s Roving-Y (1980); Bill Walsh’s West Coast Offense (1982); Buddy Ryan’s 46 Defense (1985); Dick LeBeau’s Zone Blitz (1993) and Bill Belichick’s “Bull’s-Eye” Game Plan (2002). The authors break down the important games in detail and by watching the game film – something Jaws does as well as anybody in football. 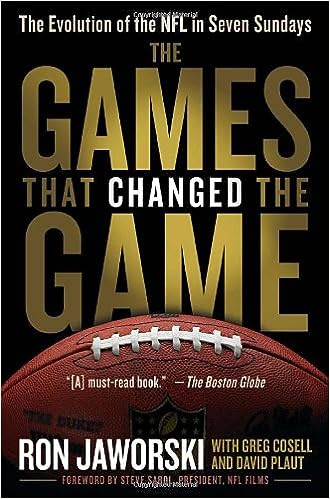 86) Monster of the Midway by Jim Dent (Thomas Dunne Books, 2003) Despite the made-up dialogue throughout the book Jim Dent’s Monster of the Midway tells a very entertaining story of one of the NFL’s greatest players- Bronko Nagurski.
85) When All the World Was Browns Town by Terry Pluto (Simon & Schuster, 1997) Long-time Akron Beacon-Journal columnist and Pulitzer Prize nominee Terry Pluto writes an entertaining book on the 1964 Cleveland Browns, the last Browns team to win a championship. Pluto does interviews with all the key characters of the ’64 Browns including Jim Brown, Bill Glass, Frank Ryan, Leroy Kelly, Paul Warfield and Gary Collins.

84) Johnny U: The Life & Times of John Unitas by Tom Callahan (Crown Publishers, 2006) A rather short but well written biography on one of the NFL’s all-time great quarterbacks. Former senior writer at Time magazine and a sports columnist with the Washington Post, Tom Callahan interviewed over 20 former teammates to write the most authoritative biography on Johnny U.


83) Uniform Numbers of the NFL: All-Time Rosters, Facts and Figures by John Maxymuk (McFarland & Company, 2005) One of the best football reference book around. Historian John Maxymuk’s research on the history of uniform numbers is second to none, any football fan can spend all day flipping through of their favorite team or players to check out which jersey they wore. 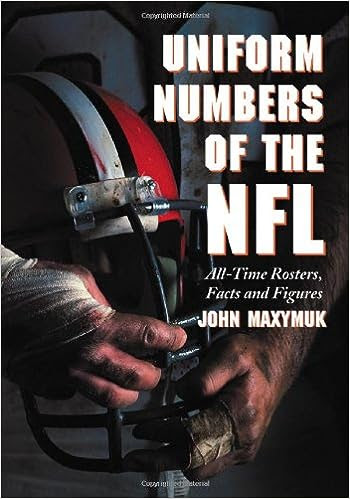 82) Bringing the Heat by Mark Bowden (Knopf, 1994) Very well written book that gives an insider's look at a professional football team. Author Mark Bowden follows the Philadelphia Eagles during their turbulent 1992 season- as they cope with the death of defensive lineman Jerome Brown and the loss of their brutally frank, determined coach, Buddy Ryan. Bowden, author of the best-seller Black Hawk Down, gives a sharp reporter’s eye in this very gripping book.
81) The Red Grange Story by Red Grange as told to Ira Morton (G.P. Putnam, 1953) The Galloping Ghost, Red Grange, tells his own story about his life in football. Many good anecdotes about the early days of the NFL in this autobiography, including his time barnstorming with the Bears in 1925-1926.