Gino Marchetti and the Fearsome Fivesome?

By Nick Webster
Last week John Turney of the Journal wrote a great piece about the history of the Fearsome Foursome, pointing out that the Rams were not the first D-Line, just the best D-Line to earn that moniker. But did you know that in the 1950s there was another D-Line with two Hall of Famers, one at Tackle, one at End, like the Rams that was referred to as the Fearsome Fivesome?

As you’ll know if you read Coach T.J. Troup’s ‘The Birth of Football's Modern 4-3 Defense: The Seven Seasons That Changed the NFL the 1950s was a decade of transition on the defensive side of the ball. Teams were transitioning from the 5-2 to the 4-3 defensive with the position of middle guard being replaced by the middle linebacker, leading to such stars as Bill George (a great College wrestler originally brought in as a middle guard and offensive guard), Joe Schmidt (an outside ‘backer who moved to the middle when the Lions went 4-3) and eventually Sam Huff (who came into camp as a smallish DT, but was moved to MLB when that was deemed a better fit).

Prior to 1953, there was scant use of the 4-3, you’d see occasional plays where an MG dropped off the line, but you couldn’t say any team played the 4-3 as their base defense. Between 1953 and 1958 every team in the NFL had taken on the 4-3 as their base, with the five-man line being the rarity. 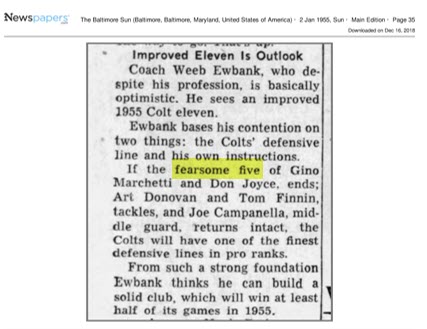 In 1954 and 1955 the Baltimore Colts were still a primarily five-man line team but mixed in the 4-3 depending on game situation. They had two young greats in Gino Marchetti and Art Donovan and strong complementary players in Don Joyce, Tom Finnin and middle guard Joe Campanella, and this group was referred to as the ‘Fearsome Five’. Check out the clip above from January 1955 highlighting the expected return of the Fearsome Five following 1954 success.


The moniker was used into 1955 as well as the Colts stayed with their traditional five-man front, again mixing in the 4-3. The clip below refers to the return of the Fearsome Five as Marchetti was set to return from his dislocated shoulder which he suffered earlier in the season against Green Bay. 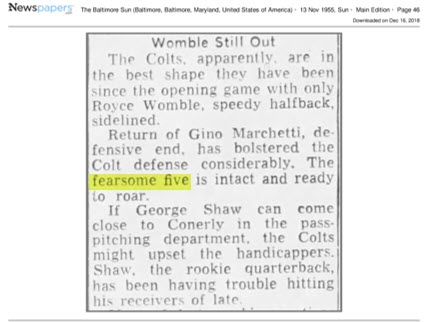 During the 1956 season the Colts were moving to the 4-3, using it most of the time, so why would they have a Fivesome of any sort?  First of all, we should note this is the first time they started calling the group the ‘Fivesome’ as opposed to just the ‘Fearsome Five’ but also, they would mix in some 5-2, even though the primary base was a 4-3 scheme.
But the Fivesome was now referred to as the 4-down linemen plus MLB Jack Patera, I suppose you could imagine the Bears referring to their great line plus Bill George as a Fivesome as well using the same logic. 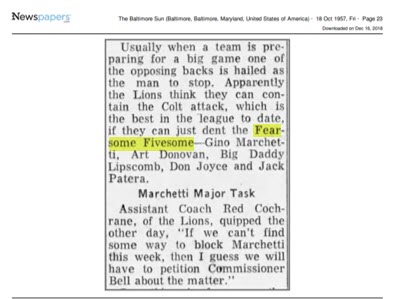 This logic held through the 1957 season with Patera at MLB being the Fearsome Fivesome. 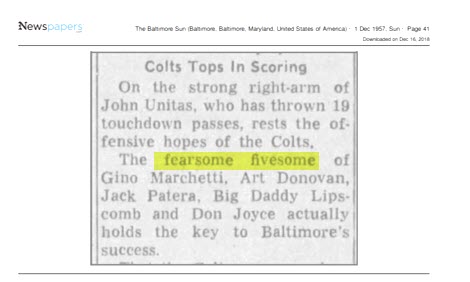 By 1958 the Colts had a different version of the Fearsome Fivesome.

Now, instead of including the MLB as a member of the Fivesome they referred to the Fivesome using the Colts rotation at defensive tackle. In 1958 the Colts may have been the first team to use a rotational scheme on the D-Line which, decades later, was made famous by Jimmy Johnson with the success he had in Dallas.
The Ends in their 4-3 front were Gino Marchetti and the solid pro Don Joyce who played more of a ‘stay at home’ strategy while Gino penetrated. The starting tackles were Hall of Famer Art Donovan and the infamous Eugene ‘Big Daddy’ Lipscomb acquired in 1956 and the full-time starter at tackle by 1957.

The final member of the Fivesome was the journeyman but truly underrated Ray Krouse who was a key member of the Giants line that featured Arnie Weinmeister and the Lion line that won the Championship in 1957. Once in Baltimore Krouse would rotate in by drive to replace Donovan and Lipscomb such that those three, as a unit, had essentially the same snap count.

Using this pattern Head Coach Weeb Eubank kept his large Tackles fresh and schemed to have them each play in approximately 2/3 of all snaps, though obviously this varied based on the length of the drive. And this group, Marchetti, Donovan, Lipscomb, Krouse and Joyce was the new Fearsome Fivesome. 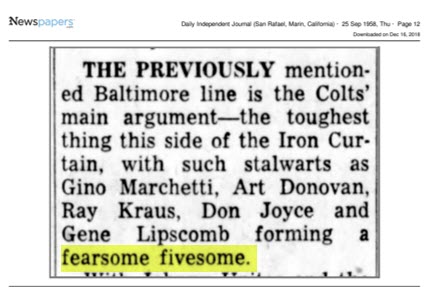 By the next season there could have been, using the same logic, a ‘Fearsome Sixsome’ as Ordell Braase began rotating in at defensive end, most frequently for Don Joyce and usually one series per game for the great Marchetti. Joyce would stay a starter for ’58 and ’59, then in 1960 the aging Joyce was replaced as a starter by Braase with Joyce now rotating in off the bench.  By 1961 Lipscomb was gone, off to Pittsburgh, Joyce was gone, off to Minnesota, and the aging Donovan was a shadow of his former self. The 1961 Colts line was Marchetti, Billy Ray Smith, Donovan and Braase.
No nicknames for this group however and the height of the Colts dynasty was now in the rearview mirror, though this was still a strong line. In fact, Ewbank himself in his second to last season graded out Braase as the best on the D-Line, Billy Ray Smith lead the team in tackles and Donovan graded out with his lowest rating since at least 1955. And, as you can see by looking at the snap counts, the idea of rotation was out the window, with most of the lineman playing similar snaps with Jim Colvin and Joe Lewis only occasionally subbing in.

By this time the Fearsome Foursome era was abounding, the Giants, Lions and then later Rams made that moniker famous and lost to history was the great Colt lines of the 1950s and the Fearsome Fivesome.
Posted by John Turney at 6:10 PM