By TJ Troup
This past Sunday Curtis Riley of New York Giants returned a deflected pass by the Redskins Mark Sanchez nine yards for a touchdown in the Giants blowout victory. New York has now returned 21 interceptions for a touchdown against Washington in their history, which ties the Chiefs (against Denver) for the most ever against a specific opponent.

Watching the show "The Aftermath" yesterday afternoon on the NFL Network the panel (enjoy these men since they actually tell me something) they discussed defense. More specifically which teams are actually playing defense this year (very few), and which aspect has the most meaning.

While stopping the run, and sacking the quarterback sure has merit—the panel was in agreement that the "takeaway" is the key to victory this year in the explosive NFL. Chicago leads the league in interceptions with 25, and the four interceptions the navy blue & burnt orange Bears pilfered against the high powered Rams on Sunday was no doubt a key to victory. 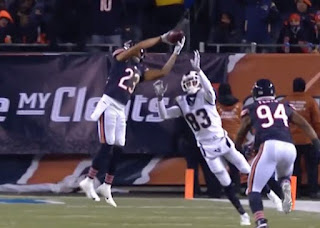 When is the last time the Bears led the league in interceptions you ask? Why during their playoff season of 1990 with 31. With three games to go, and if Chicago grabs three more errant passes by opponent passers they will tie the 2013 Seahawks for the most in the last six years.

The challenge for the Chicago secondary on Sunday comes in the form of Mr. Rodgers as he ventures into the Bears neighborhood with record-setting ability of NOT throwing an interception.

Chicago is on the verge of a division title; which would be their 17th since 1940, and the Bears record against Green Bay is 27-6-1 in those seventeen seasons. The Packers would relish beating their long time rival and in 2001 Green Bay beat the Bears twice, yet Chicago won the division anyway. 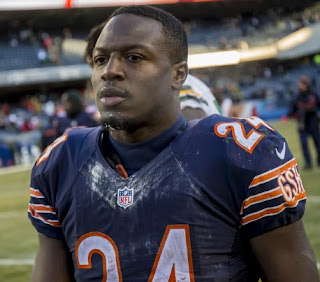 Jordan Howard has been among the league leaders in rushing during his two years in the league, but has not been near as productive in 2018. Sunday night, almost lost in the discussion was the fact that Howard gained 101 yards rushing to become the ninth different Bear runner to gain over one hundred against the Rams. Thirteen times a Bear has gained over 100 yards against the Rams with a record of ten wins and three losses in those games.
Posted by TJ Troup at 3:27 AM