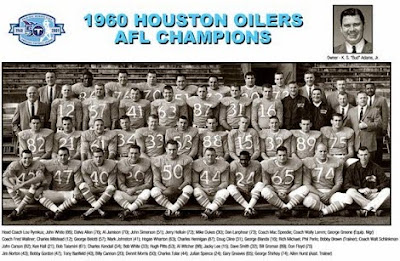 Hope everyone had a blessed Christmas. Have always enjoyed the meaning and definition of words. The word rivalry has been used many times in descriptions in pro football, and descriptive words such as fight, duel, clash, contest, struggle, encounter are listed to help explain the definition.

Since there are thirty-two teams and the schedule has a rotational basis for inter-conference games building a rivalry is difficult. We all can quickly name the best or most well known rivalries in the NFL which will take me to the upcoming NBC Sunday night "clash" between the Colts and Titans. 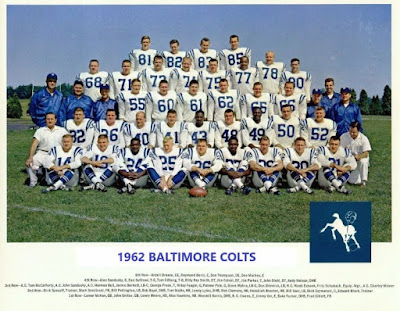 Starting in 1960 no one, and I mean no one would have ever envisioned these two teams building a rivalry. So, let's start there. November 13th, 1960 and the two-time league defending champion Baltimore Colts have just beaten the Bears in Wrigley to forge a first-place 6-2 record.

The Houston Oilers—1,175 miles away from Baltimore are trying to make their first season in a new league a successful one, but have just lost to the Chargers. The Baltimore Colts falter badly losing four straight; while the Houston Oilers continue to progress and win the first AFL championship.

The talented but aging Colts battle for the next two seasons, yet are basically a .500 team, while the Oilers earn a berth in the title game under a different head coach for three consecutive seasons! Coaching changes and direction bring us to the season of 1967.

Since the NFL now has sixteen teams; the divisions are divided into four and all have the letter "C". The Baltimore Colts are in the Coastal Division of the NFL while the Houston Oilers are still in the AFL eastern conference. November the 5th and Don Shula has a powerhouse team that stands at 6-0-2 and has just beaten the champion Packers, while Wally Lemm has returned to the now contending Oilers who lost to the Patriots and stand at 4-3-1.

The Baltimore Colts are the only team pre-merger in NFL history to lose just once in a fourteen game season and NOT make the playoffs, while the Oilers with their outstanding young defense win down the stretch and win the AFL East. Pete Rozelle has agreed to the merger, and with sixteen and ten teams in the two leagues there has to be movement for 1970.

The Colts agree to become an AFC eastern conference team; so for the first time in their history the geography will make sense for them. The Oilers are placed in the AFC central division so they also at least are closer in distance from their three division opponents. 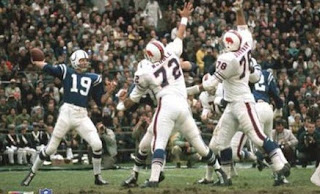 The Colts under a new head coach in Don McCafferty will travel to the Astrodome in Houston on October 11th to play the Oilers in Wally Lemm's last season as head coach. John Unitas throws two touchdown passes to Roy Jefferson in the Colts victory. The winning score is a textbook example of Johnny "Hightops" at his best on a touch pass on a fade pattern in the corner of the end zone. Many folks have stated that the 11-2-1 Baltimore Colts are one of the weakest Super Bowl champions ever, yet like all champions they made the plays needed to earn the ring.

The Oilers stumble all season and are quickly going to become a joke in the league. November the 4th, 1973 and Houston is looking for a victory. Bill Petersen has been dismissed after winning just once in 18 games as head coach. Sid Gillman is attempting to field a competitive team as they travel to Baltimore to play a Baltimore Colts team that is also struggling to win a game.

Lynn Dickey pitches the Oilers to a win as he repeatedly completes passes to Parks, Burrough, and Willis. Gillman steps down entering '75, and Baltimore also has a new coach in longtime NFL and NFC offensive co-ordinator Ted Marchibroda. After five games the suddenly competitive Oilers under Bum Phillips stand at 4-1, while the Colts are 1-4. The rest of the season has twists and turns in the league, yet after the smoke clears on the final Sunday of the this fascinating season both teams are 10-4. The Colts have won the east, while the Oilers are no doubt the best third-place team in the NFL. Being in different divisions in the same conference does not mean you play each other every year. As such these two teams would not be even remotely considered "rivals". 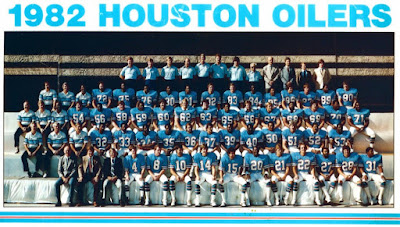 The player strike in 1982 is a low point in NFL history, yet Rozelle to save the season expands the playoffs to a "tournament". Entertaining to say the least unless you are a longtime fan of the Colts or Oilers. These two pathetic teams combine for a 1-16-1 record. Neither team is a viable contender in their division for the next few years until again we have a strike.

The 1987 season with "replacement" players and an adjusted schedule of eliminating one game brings both teams into contention, and both finish 9-6 and earn a playoff berth. The only real difference is the Colts are now in Indianapolis. For the next twelve years both teams have their moments, yet rarely player each other. The 1999 season is an exciting and successful one for both franchises as they finish 13-3.

Starting in '97 the Oilers have left Houston and are first the Tennessee Oilers then re-christened the Titans. For the first and only time on January 16th, 2000, these two teams meet in the playoffs. Eddie George pounds out 162 yards as the Titans march to a super bowl berth. Beginning in 2002 these two teams are finally in the same division (AFC South), and battle throughout the year to win the division(both teams earn a playoff berth).

The 2003 season stands out since both teams finish 12-4, yet the Colts win both games head to head. Indianapolis eventually wins a Super Bowl title, but the Titans though usually competitive have yet to hold the silver trophy. During a disastrous 2011 season for the Colts (2-14), one of the wins is a victory over the Titans. At one point the Colts had beaten Tennessee eleven straight times, and hold a commanding lead in the series. 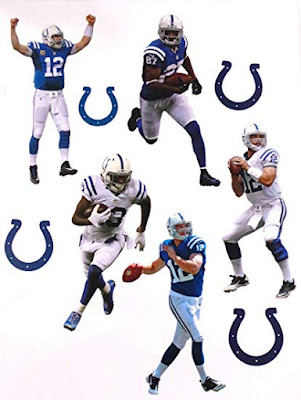 So where are we today? Both teams have rookie head coaches that have done an admirable job this year, and are playing for a play-off berth. The distance between the two cities is just 289 miles down 65 and those folks that attend the game Sunday night should see a fight, duel, clash, contest, struggle, encounter—ah hell you pick the word of these two teams that have had many twists and turns in their franchises history yet can now truly be called RIVALS.
Posted by TJ Troup at 5:27 AM