The Epitome of a Bomb—Bob Hayes' Longest Touchdown Reception

LOOKING BACK
By John Turney
The obvious use for speed at wide receiver in the NFL is to once ina while you can get a huge play. Here, Bob Hayes, scores a 95-yard touchdown off the arm of Don Meridith, who was playing with a broken rib. At the time it was the longest touchdown catch in Dallas history, the exact thing the Cowboys wanted when they acquired Hayes.

It happened on November 13, 1966, in Washington. Meridith had already hit Hayes for a 52-yard score to go up 14-6. This play put Dallas up 21-6. But the pesky Redskins came back and took the lead 30-28. Meredith then took the Cowboys down the field late in the game to set up a Danny Villanueva 20-yard game-winning field goal.

The full play is HERE.

Here are a few screenshots for our purposes.
You can see the fullback behind the right tackle and the halfback, Dan Reeves, on the outside hip of the tight end. Bob Hayes is the "X" to the near side and the "Z" or flanker, though Dallas called it a "W" or 'wing' (Pete Gent—author of North Dallas 40) is outside the halfback.
Reeves stays in to block, Perkins runs a 'shoot' route (to the line of scrimmage then to the flat) and Pettis Norman, the tight end, runs a short in-cutting route, though hard to see perhaps a turn-in or a trail route. Gent is outside the frame but also runs an 'in' or a 'pick' route (Dallas terminology) at about 10-12 yards. Hayes clearly runs a deep post. Reeves the halfback on the tight ends hip checks for a blitzer then releases out to the left, perhaps a 'check' route (again Cowboys verbiage)

The concept looked something like this based on film study. 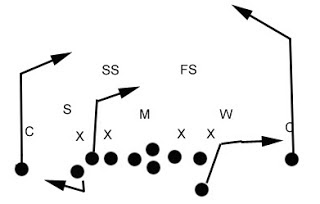 The 6-man protection is man to man blocking with the center and the backs responsible for the linebackers. Here the left linebacker is in coverage, not blitzing allowed Perkins to release into the pattern.
Hayes beats Lonnie Sanders who was not a regular starter in 1966. The usual left corner and right corner (Rickie Harris and Jim Shorter) played in the game as did the starting safeties Brig Owens and Paul Krause, but only Sanders appears in this clip. Harris was playing safety for part of the game in place of Owens who wasn't in the lineup much of the game (though he did kickoff).

We also saw rookie Billy Clay playing left corner (and maybe even safety) later in the game. Clay played one season (6 games with one start) in the NFL so it's possible he replaced Sanders after the 95-yard bomb. (Clay was later penalized 15-yards on a late hit out of bounds on Meridith which put the Cowboys on the 12-yard line and there Villanueva 20-yard field goal to win the game)

For the record, Sanders was also beat on the 52-yard touchdown and the play was similar. So it does seem Meridith was picking on Sanders in the game, the 'weak spot'.

Sanders had been a starter for the Redskins for several years but was hurt in both 1965 and 1966. He was a tall, big corner, 6-3, 207 pounds whereas Harris was smaller and likely quicker (5-11, 182 pounds). Either way, Sanders was no match for Hayes in man coverage and in neither play did a safety appear to give any deep help.

So back to the screenshots. Prior to the above shot, there is one with a safety in it, maybe 10 yards behind the play. We are not sure if it's the free safety but likely is. Perhaps there was supposed to be a free safety to help out. It wasn't a blitz, looks to be man-free coverage. Maybe it was man-robber and the safety got caught going forward rather than back, not thinking Dallas would throw this type of concept at them on 1st and 15. Or perhaps it was just a mental error by the safety or just a bad call to not have a post safety on that call. Honestly, we don't know.
So, with the Cowboys backed up on their own five, they don't do their usual sets (Red or Brown) with two backs in the backfield, they split the backs very wide and give almost a no-back look (would be hard to run from this formation, though it could be done) go for the bomb.

Also note that right defensive end Carl Kammerer was having a monster year in 1966, among the NFL's leaders in sacks. Though not official film sessions would have shown that to the Dallas coaching staff. Joe Rutgens a very good defensive tackle, though he was nicked and missed a lot of time in 1966 played that day as well. So, it wasn't as if they were going against a substandard line.

As we mentioned perhaps there were issues with the secondary with Owens out and Sanders in at corner and Harris moving to safety and it appears Dallas took advantage of that.

Though we can learn tons from the highlights, without a high angle views we cannot always piece things together, but our theory is that the cagy Meredith or Landry, whoever called the play, had beaten Sanders on a post for a touchdown and took another shot with the same play in a new formation, this one "Green left trip tight" (the earlier 52-yard touchdown was out of "Brown left up under") and it isolated Hayes on Sanders and it made history—it's still the longest pass play in Dallas history.

But of course, it's not the longest play, that belongs to Tony Dorsett and his "99 yards and a half" touchdown run called by Don Meridith.
Posted by John Turney at 7:46 PM