You Can Do it Luke—Kuechly on a Record Pace 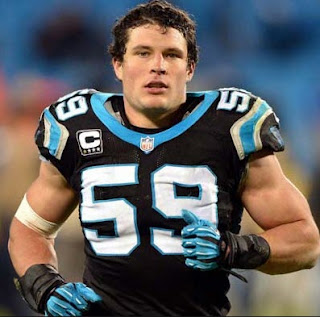 In 2013 J.J. Watt had a somewhat down year after his breakout 2012 season, late in the year the battle for Defensive Player of the Year was still very much undecided, until; in a December game Luke Kuechly posted 24 tackles in a single game.

Now we have many problems with tackle statistics, which are not official, and it is worth noting that in this game Kuechly tallied just nine solo tackles and 15 Assisted tackles, he was there to help another an unusual number of times, by comparison the last 24-tackle game was notched by the renowned (not really) David Harris in 2007, in that game Harris made 20 solo tackles and assisted on just four.

But the media went crazy, ESPN went crazy, and the Defensive Player of the Year award was Luke’s to lose—and he did, in some outlets anyway. People have tended to default to the Associated Press award as the only NFL Defensive Player of the Year award but there are other outlets casting votes as well and in fact the Pro Football Writers Association is still issuing the award and started issuing it prior to the AP in 1969, the AP first issued it in 1971 (lots of caveats here for another day).

Kuechly did win the AP award, but Rams pass rusher extraordinaire Robert Quinn won the award from the Pro Football Writers Association. In fact, unanimous winners are relatively rare, people who note Lawrence Taylor's three DPOY Awards should note that only his ’86 award was the consensus.

So why revisit 2013 again in 2018, because Luke Kuechly the somewhat controversial winner of the 2013 award is performing truly exceptionally this year.

Below are Luke’s career numbers, with 2018 through 14 games. 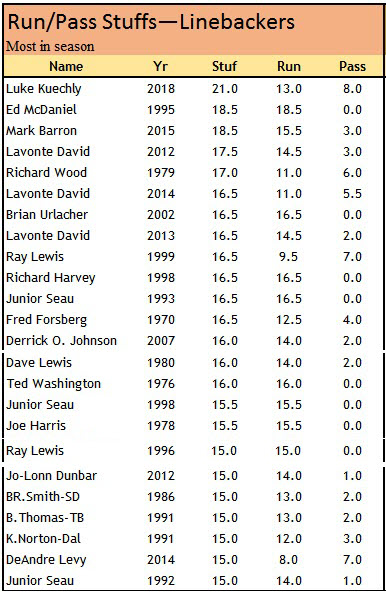 At this point, Luke is only trailing J.J. Watt’s 23.5 in 2012 (these are complete numbers since 1982 – to align with the ‘official’ sack era—but Luke is second total and first among LB’s in any data we’ve compiled prior to 1982 as well). In fact, Luke is on pace for exactly 24 stuffs which, if he keeps it up, would surpass Watt for tops on the all-time single-season list. 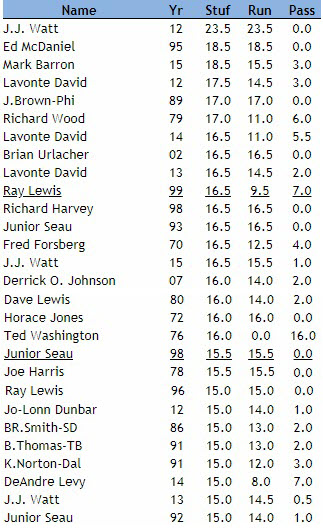 An amazing detail underlying Kuechly’s 2018 dominance is that eight of those stuffs are on passing plays, but even if you took away all of his pass stuffs and allowed everyone else credit for their pass stuffs, he would still currently lead the league with 13 stuffs. 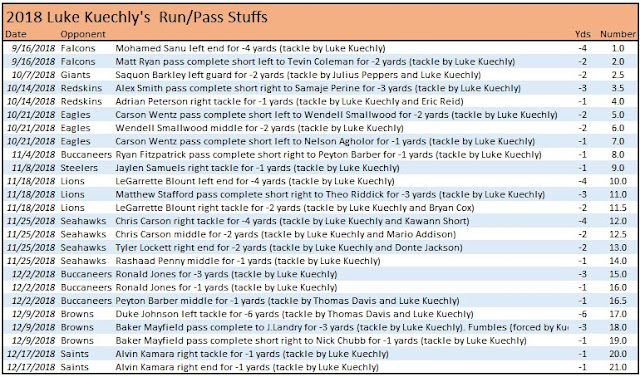 The eight pass stuffs is the most since 1982 (and the most of what we’ve recorded prior) surpassing Ray Lewis’ 1999 total of seven; so Kuechly has passed peak Ray Lewis as a tackler on passing plays— quite impressive.

See leaders of pass, run, and total stuffs through 14 games below:

So, as you think about your choice for Defensive Player of the Year, who do you choose. Through 14 weeks, the eye test tells me Aaron Donald is on another level. There are numbers and impact to overall team defensive performance to support both Khalil Mack and J.J. Watt as reasonable choices.

But don’t sleep on Kuechly, he’s having a truly all-time great season and deserves mention amongst the names above. It would take quite a finish to have anyone surpass Donald at this point, but with 2 games left it’s still not in the bag, how about 24 tackles again in week 15 Mr. Kuechly?
Posted by John Turney at 10:23 AM