The 1978 Season of Ezra Johnson and Its Oddity

By John Turney
In doing sack research for many years we've been able to go through play-by-plays and usually reconcile issues of sacks that may appear in media guides and how they differ from those play-by-plays.
Usually, the coaches stats will add half-sacks and whole sacks together and that is how Dallas gave credit to Harvey martin for 23 sacks in 1977 when the play-by-plays shoes 20. The same is so for Coy Bacon
s 26 in 1976 which we find to be 21½ when looking at the play-by-plays.
However, in the case of Ezra Johnson, it does not appear the coaches did that—they have a total of 20½ sacks for Johnson and that showed they divided shared sacks. But when we pored over the gamebooks (play-by-plays) we only found 17½ sacks for Johnson.
Here is the totals from the play-by-plays— 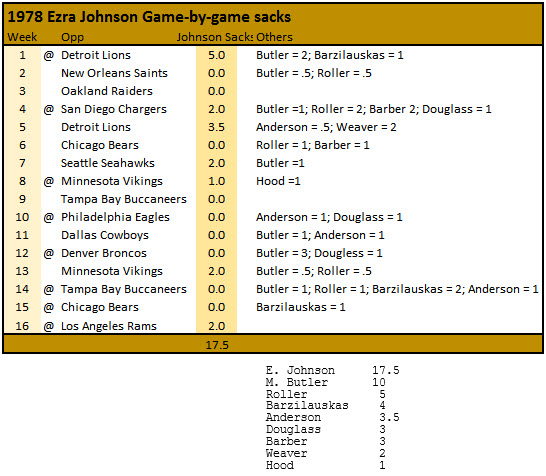 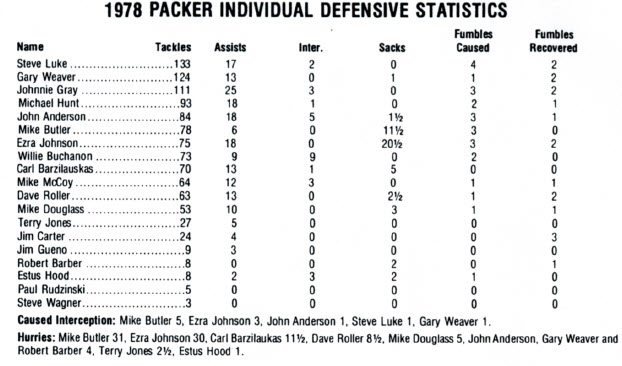 As you can see there are some differences and in our view, more the usual. So, the question is which is right? Well, both.
We just don't know how the media guide totals were complied. We feel like film is the best evidence of a sack, but until we can see it we have to use the same source that we use for all the teams and therefore have to use the play-by-play total.
To, to be clear, we are not saying Johnson didn't have 20½ sacks in 1978, he very well may have, but it wouldn't be right to count his coaches totals (if that is what these are) and then not use the coaches totals for Harvey Martin in 1977.
We'd love to see the weekly totals for Johnson and then we could perhaps know who to take sacks from to raise his total to 20½ because it's a zero-sum game and the total has to be the same as the team total as far as possible. In this year there was one play that should have been scored a sack, we found it and it seems the media guide total reflects it as well since we both came up with 49 and the team total was 48.
But if someone is a purist that one could be removed, it makes little difference.
So one day we hope to get to the bottom of this anomaly because we'd like to give Johnson credit for a 20-sack season and Packer fans still can if they go by the media guide. All we can say is the play-by-plays show 17½.
We are always looking for the best information possible and welcome any information that would shed light on this situation. We are not the final arbiter of the total, we just try and post what we find in the gamebooks and explain any issues we find and this is one of those cases.
Neither is wrong, both are right, it's just different sources with slightly different totals.
Posted by John Turney at 4:11 PM