LOOKING BACK
By John Turney
Former NFL All-Pro linebacker Isiah Robertson (nicked named Butch) was killed in a car crash near of Dallas on Thursday night, December 6, 2018, He was just 69. Robertson, according to police was killed after his limo went round a corner at an 'unsafe speed'. The crash is still under investigation.

Robertson was a First-round draft pick (10th overall) by the Los Angeles Rams in 1971 and was the NFL Defensive Rookie of the Year, an All-Rookie selection and a Second-team All-Pro that year. 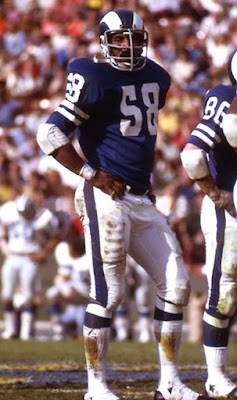 He was named the NFC Linebacker of the Year in 1973 and was the second-leading vote getter for the NFL Defensive Player of the Year that same seasons (was runner-up to Dick Anderson). In 2016 he was voted to the Pro Football Researcher Association's "Hall of the Very Good" noting his excellence of play.

He ended his career with 879 tackles and 24½ sacks and 25 interceptions and he scored four defensive touchdowns. He also forced 24 fumbles and defensed 79 passes in addition to his pick total.

He was a personal favorite of Howard Cosell, due to Robertson seemingly making a big play in every game the Rams were on Monday Night. When that happened Cosell would make sure the audience knew how "good that Isiah Robertson was". 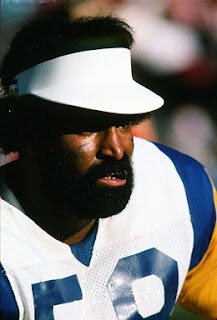 His roommate, as a rookie, was Jack Youngblood, a fellow rookie and fellow alum of the College All-Star game in Chicago that year. a game that both excelled in. "Butch was one of the top 4-5 athletes I had the privilege of playing with, he's right up there with Monte Jackson, Nolan Cromwell, Johnnie Johnson and Eric Dickerson in terms speed, agility, reactions—those type things. If he played in this recent era he'd have been like a Derrick Brooks or Lance Briggs, a buck-type 'backer who could flow over the top and make a play or get into coverage and find the ball and take it to the house for you. He was a good rusher—every few games he could sting the offense on a linebacker dog and get a sack and force a fumble".  Youngblood then added, "Damn, this news sucks. Butch could be a bit of trouble—he had his demons but I loved that kid, He could play some ball".

Mike Giddings agreed,  "Gifted OLB, one of first OLBs to fit modern game—could run with most RBs, cover any TE, and play the run via technique and quicks." All-Pro safety Nolan Cromwell's views were sympatico with Giddings, "He was a very athletic linebacker that could cover any back or tight end in the league. He had the knack of making BIG plays."

Fred Dryer added, "This is heartbreaking—Butch and I had a special gameday relationship. He was a unique person and personality and a gifted athlete and a great teammate. He loved to laugh and was the focal point of much kidding. Come gameday you never knew what to expect because he made so many big plays—he was really something special as a player as a teammate and as a friend".

Robertson attended Southern University from 1967-70, was inducted into the Black College Football Hall of Fame in 2017.  In 1970 he made 112 tackles and had 45 assists. Isiah was chosen to The Sporting News and TIME 1970 All-American team in 1970 as well as being named AP and UPI small college All-American Teams.

Originally the Rams saw him as a middle linebacker, the position he played in college, but when they got him to camp he was best suited for the outside position. His first two seasons he was a weakside linebacker, always away from the tight end but in 1973 moved to what the Rams called the "buck" linebacker, always on the right. However, in that era, tight ends were usually on the offensive right putting Robertson on the weak side most of the time anyway.

He had a knack for the big play as evidenced by his interception, forced fumble and sack totals. In addition to his four defensive touchdowns, he had an additional pick-six in the 1974 playoffs, stealing a Sonny Jurgenson pass and returning it for a score to seal the victory for the Rams.

Robertson was a tremendous athlete with excellent speed and flexibility. His teammates loved him but often lamented the fact that he'd sometimes play the wrong coverage and still make a big play. Such was the case for the 59-yard touchdown in the 1974 playoff game. Jack Reynolds once told us that the reason Sonny Jurgenson threw the ball where he did was because no Ram was supposed to be there, but "Butch was" and he caught the ball and did what he often did—weaved his way through traffic to the end zone.

The contract issues in 1978 caused Robertson to be accused of loafing in practice and led to his benching, though he still came in on passing downs after he had lost his job to Bob Brudzinski. After the season, Chuck Knox, the Bills coach saw value in Robertson and shipped a 4th round pick to the Rams for Butch's services. Said Giddings, Robertson had a "second career" at Buffalo by adjusting to loss of step with smarts".
Actually, Robertson's "second career" almost happened in Green Bay. The morning George Allen was fired by Rams owner Carroll Rosenbloom he told Jack Youngblood and Fred Dyer that he had traded Butch to the Packers. Later that afternoon Youngblood pulled into a parking space at Fullerton, where the Rams camp was located and he sees Rosenbloom in the bushes urinating.
Rosenbloom comes out of the bushes and sees Youngblood and says to him "He's killing us. I gotta fire him". And that was the whole conversation.

Youngblood continued into the meeting rooms and sits down and Rsembloom announced to the team that Allen had been fired. According to both Youngblood and Dryer, the trade of Robertson (not ever finalized and negated by Rosenbloom) was the final straw in what had been a series of disputed between Allen and Rams brass.

With the Bills, Robertson played outside linebacker in a 3-4 defense rather than in the 4-3 that the Rams ran. He played on the left in his initial season there and in 1980 he moved back to his more usual right side post, albeit still in a 3-4 scheme. In his time with the Bills he helped Knox rebuild the Bills and turned them into a playoff team in 1980-81 and then he retired after the 1982 season. 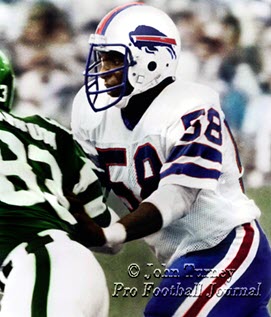 After retiring from football and conquering his own addictions Robertson founded a drug and alcohol rehabilitation center in Mabank, TX, very near to where the fatal crash occurred last night.

Robertson is often remembered as the guy who Earl Campbell ran over in a game in the Astrodome in 1978. And Butch took a lot of ribbing for it. And he'd bristle but lived with it but also liked people to know later in the game he knocked Campbell's out of the game with a hit to the thigh and the Rams held on the win that game. In recent years the two have posed together for photos, so it ended all with an "all's well that ends well".
Butch, you will be missed, you were one of a kind.
Posted by John Turney at 1:30 PM