The Beginning of the Stretch Run to Super Bowl III 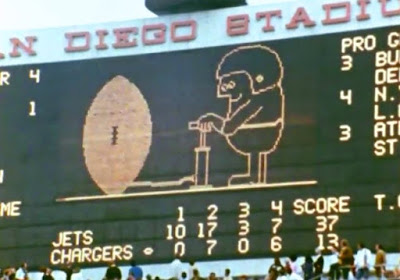 A wise frog once said, "It's not easy bein' green." A green-clad football team known as the New York Jets know all about what that frog meant. As this 2018 season winds down the Jets are having another tough go of things. This is the eighth consecutive season in which the Jets will not qualify for the playoffs. Other than seeing young players develop such as quarterback Sam Darnold, safety Jamal Adams, and tight end Chris Herndon, Jets fans have not had many reasons this season to be happy.

The Chargers on the other hand? Oh, things are going a little bit better for them. Led by head coach Anthony Lynn, a former Jets assistant coach, they have a record of 11-4 and have given their fans reason to believe that the team can reach the summit of pro football just as the Jets did in 1968. Like those Jets, the Chargers had some struggles early in the season (they lost two of their first three games) before they blasted off.

These franchises are in very different places right now. One is going to spend January trying to make it to the Super Bowl whereas the other is probably going to spend January looking for a new coaching staff. However, going into their matchup on November 24, 1968, these teams were not in very different places. The Jets flew to San Diego with a record of 7-3 and the opportunity to clinch a tie for the AFL Eastern Division title. The Chargers sported an 8-2 record. They were a half-game behind the Kansas City Chiefs and were tied with the Oakland Raiders.

To that point in their history, the Jets had never reached the playoffs. During those same eight seasons, the Chargers played in five AFL title games. The Jets only won one of the first 12 meetings between these two teams but the tide started to change in Joe Namath's second season. The Jets split the season series that year and then won the lone matchup in 1967. On October 5, 1968, the teams met on a Saturday night in New York. The Jets squeaked out a 23-20 victory. It was a win that indicated the Jets may have turned the corner from also-ran status to title contender. Alas, maybe not. The Jets dropped a home game eight days later against the rotten Denver Broncos and their record fell to 3-2. They had defeated two top teams but also lost to two bad ones. Maybe the Jets were just pretenders.

The loss to the Broncos was the wake-up call. That was it. Nobody was kicking sand in their faces anymore. This team was tough as a female alligator sitting on eggs and it was time to show it. Including the postseason, the Jets went 10-1 the rest of the way with the lone loss being the freakish Heidi Bowl on November 17.

A week later, on an overcast day deep in the canyon of Mission Valley, the Jets announced to the football world that they were for real. Like a house cat toying with a mouse, the game was really no contest.
51,175 fans were in attendance. Most hoped to see the five and a half point favorite Chargers topple the upstart Jets and their fancy quarterback Namath. Most exited three hours later disappointed. The Jets lead 10-0 after one period. The scoring started via the right leg of Jim Turner. Turner's 13-yard field goal was his 29th of the season and established a new pro football record. The Jets second possession ended on an 87-yard bomb from Namath to Don Maynard. Chargers cornerback Bob Howard was the victim. 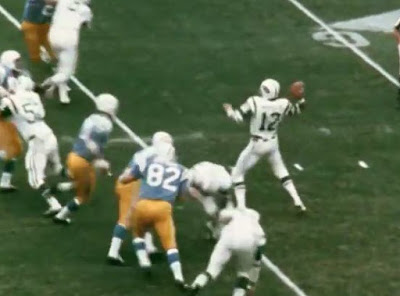 The Jets increased their lead to 20-0 in the second quarter on a Matt Snell touchdown run and another Turner field goal. Later in the period, the Chargers got an idea of turning the game around when Speedy Duncan returned a punt an AFL record 95 yards for a touchdown. The Chargers idea? It died, and it died quick. The ensuing Jets drive ended with a 19 yard Namath touchdown pass to running back Bill Mathis. The Jets took a 27-7 lead into the halftime break. They broke the Chargers.
Namath completed 13 of 25 first half passes for 277 yards. Due to the large lead, Namath didn't pass much in the second half as the goal was to run the ball, avoid interceptions, take time off the clock, and not let the Chargers get one of those ideas again. A 1-yard run by Mathis in the 4th quarter gave the Jets a 37-7 lead. It was certainly curtains by that point. The Chargers did add a second touchdown and then converted a two-point pass to make it a final score of 37-15.

Namath would finish the game 17 of 31 for 337 yards and two touchdown passes. Maynard caught six passes for 166 yards. Split end George Sauer tallied five aerials for 124 yards. Led by the tough Snell and the shifty Emerson Boozer, the Jets gained 142 rushing yards on 40 carries. Conversely, the Chargers only ran the ball a dozen times.  The Jets offensive line featuring excellent left tackle Winston Hill kept Namath extremely well-protected. Namath was not sacked. Asked after the game if he ever was afforded better protection, he said, "I can't remember it. The only time I threw the ball away was when they had our guys covered. I never had to throw it away because I was rushed." He was later asked if he thought he could throw the ball well vs the Chargers. Namath said, "I always think I can pass against anyone with our receivers. When we get time, Sauer and Maynard are awfully hard to cover." Chargers head coach Sid Gillman said, "We played badly and we were coached badly. We didn't do anything . . . the way Namath was throwing today, he could have beaten anybody."
Namath's counterpart, John Hadl, had a very difficult day. He completed only 19 of his 46 passes for 190 yards and four interceptions. The pigskin pilferers were cornerbacks Randy Beverly and Cornell Gordon, safety Bill Baird, and linebacker Ralph Baker. The Jets defense did not allow any significant San Diego yardage until the game was already decided. The Chargers only gained 235 yards from scrimmage. The Jets had shut down the league's top-ranked offense.

The Jets followed up the win by winning their final three regular season games, the AFL title game vs the Raiders, and something called Super Bowl 3. The Chargers did not recover. Although they did beat the Broncos to improve to a record of 9-3, they then were severely beaten by the Chiefs at home by a score of 40-3. They dropped the season finale to the Raiders 34-27 to finish with a disappointing third-place record of 9-5.
Time will tell if the 2018 Chargers can have a finish to their season close to that of the 1968 Jets. If they win their season finale, play on Wild Card weekend, and win all their playoff games, they will finish the season having won nine of their final 10 games. That would be very-1968 Jets-like.
The Jets had already started on their 10-1 finish so the win over the Chargers was not truly the turning point of the season but it was the first win on the winning streak to end the season.


John W. Lesko is a member of the Professional Football Researchers Association and a graduate of Seton Hall University. He is a contributing writer of  "The 1958 Baltimore Colts: Profiles of the NFL's First Sudden Death Champions" and wrote an article for "The Coffin Corner" on all the major pro football games without a touchdown.
Posted by John Turney at 4:22 PM