A Gentle Suggestion For Roger Goodell and the NFL Marketing Group


Renaissance: The movement began in Italy in the 14th century and the term, literally meaning rebirth, describes the revival of interest in the artistic achievements of the Classical world. I am when it was commissioned (likely 1985), but under the leadership of Pete Rozelle and what was then known as NFL Properties, the league had the best watercolor artist (my personal opinion) in the country paint portraits of the past Super Bowl MVPs and then had that artist continue the series through 1998.

In 1963, Rozelle founded NFL Properties to manage the league's logos and sell officially licensed merchandise, but there have been many changes (too many to detail) since 1998. But whoever or whatever entity is responsible for commissioning artwork for the National Football League we make the following request:

I do not know Bruce Tatman and would make zero money on any business the NFL and Mr. Tatman would engage in. I just wish that those Super Bowl MVP and other paintings would continue and I have seen Mr. work and in my view he's the closest to that "best watercolor artist" I have seen.

Of course, that artist mentioned in the first paragraph is Merv Corning. Most football fans in previous generations are familiar with Corning's works.  He has done perhaps 300 pieces of work that have appeared in NFL publications, i.e. , game programs, posters, etc. His contributions entitle him to be awarded the Daniel F. Reeves award, which is periodically given by the Pro Football Hall of Fame. I have nominated , and Elias Sports Bureau's Seymour Siwoff every year for the past decade and I hope both can share that award someday.

Here are some examples of Mr. Corning's work: 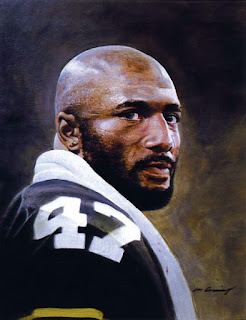 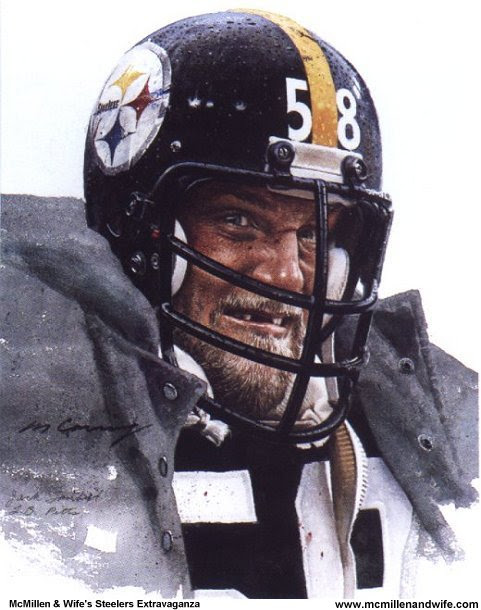 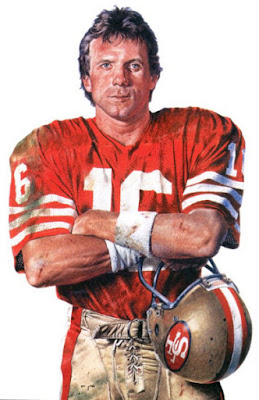 Here are some examples of Mr. work: 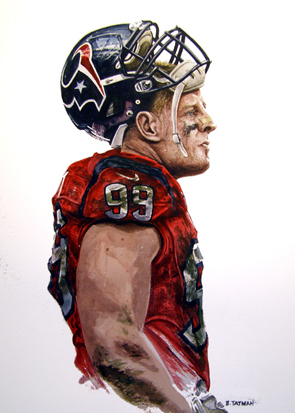 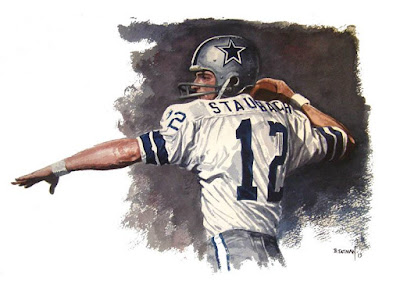 As can be seen, the work is excellent and captures the  ne sais quoi of the late Merv Corning's work. It is also my view that Mr. Tatman is not now at the level Corning was, but he's getting there and based on his seeming interest in the NFL and NFL art he should be, at least, considered if the Super Bowl MVP portrait series is continued.

Here is to this request not falling on deaf ears, but a hope that the legacy of the NFL is preserved not only in film, photographs and statistics, but also in art. My view is a Renaissance in NFL Properties and in NFL artwork would be a positive thing in the sport and for the league.

Mr. Goodell, I pray this request reaches your desk. If it does I know it will get its due attention.

For more of Bruce Tatman's work  his Facebook address is HERE.
Posted by John Turney at 5:45 PM