I would have preferred seeing a rush tackle paired with Olsen and or Kennedy. Both are great, Olsen a bit better rusher than Kennedy but both were run stuffing tackles. Les Richter was mostly a middle linebacker for the Rams, except his first couple of seasons when they were still running the 5-2. So, he does project as does Conner. Polian chose two right side ends, but Dent might project to the strong side. Haley and Dent, as designated rushers would play on the left side, but by and large both were right defensive ends. Haley was an "elephant" when he was with the 49ers.

Polian has two right tackles, an oddity in this draft when most of us have two left tackles. Slatr played left tackle in 1981, due to injuries, and hated it. He'd been on he right and moving was not his favorite thing. He was happy in 1982 to move back to right tackle. 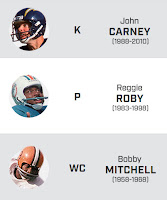 This is a good set of special teamers.
Posted by John Turney at 5:35 PM