Morten Andersen—The Rest of the Story 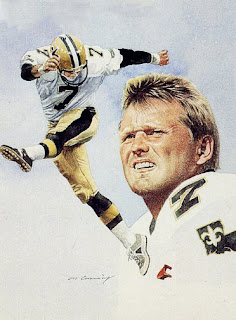 Morten Andersen was voted into the Pro Football Hall of Fame in February and next month he will be the second pure kicker ever to be enshrined. He played 25 seasons and was a member NFL All-Decade teams in both the 1980s and 1990s and he still holds many NFL records, including most career points (2,544), most career field goals (565).

He was a five-time First-team All-Pro and was a Second-team selection once and was a 7-time Pro Bowl selection. Andersen had a leg that was ahead of his time, being able to kick 50-yard or longer field goals regularly when most good kickers couldn't reach that distance as often or as accurately. In the 1980s Andersen was 13 for 31 in 50-yard attempts or longer.

However, a big part of the kicker's job is on kickoffs and it's not often reported on. Since 1991 the NFL has been tracking kickoff statistics and Andersen fared well in those, but what was never tracked were the kickoffs prior to that, from 1982-90 in Andersen's case.

We then subtract the number of kickoff returns (which is a known quantity) and get the number of kickoffs that were not returned. This is our estimate of presumed touchbacks. However, a small percentage of kickoffs that are not returned are not touchbacks. They could have gone out of bounds or they may have been a botched onside kick attempt. Again, we ignored those and just accept that there is a margin for error in the numbers.

However, we think the numbers we derived for presumed touchbacks is close enough to tell who the kickers were that were getting the most distance and the most touchbacks even if our numbers might be off by one either way.

Based on that date we've created this chart: 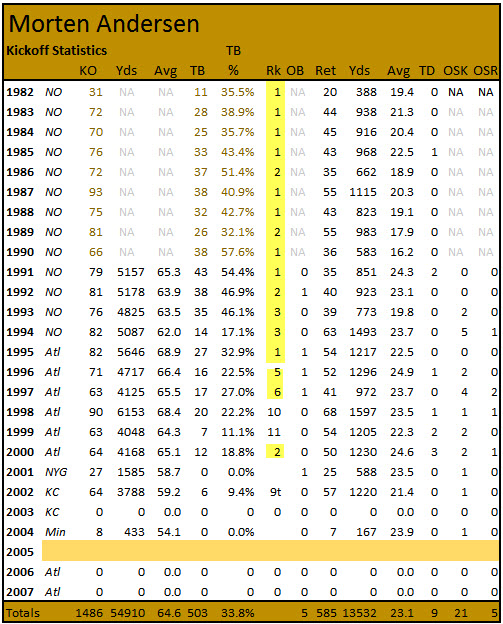 From 1982-90 Andersen ranked first in touchback percentage 7 times and was second twice. (He lost out to Lee "Thunderfoot" Johnson in 1986 and 1989 the Oiler and Bengal punter who was also their kickoff specialist).

After checking these numbers back through the 1960s it is clear that Morten Andersen was the most proficient at kicking touchbacks in the 1974-93 era. (In 1973 kickoffs were from the 40-yard line making touchbacks a bit easier). And even though he was 35 years old when the 1994-2011 era began he was still one of the best until age caught up and he wasn't kicking off anymore.

We would hope the NFL, at some point, goes back and officially back dates kicking statistics like kickoffs, net kickoffs, touchbacks, onside kick success, and net punting stats. We are not holding our breath but as Andersen's election to the Hall of Fame shows there is a need for such things. It would be a tremendous aid to Hall of Fame voters to find hidden gems among some of the great kickers and punters of the past.

Though many of us remember Andersen's kickoff leg, there are many youngsters who don't. And though we think our estimates get us 99% there in terms of accuracy, it would be even better if all the numbers were there.