Peter King MMQB All-Time Draft Team is next on my list for analysis.

Eller and Watt are both left ends, but Watt moves around and would project as a 4-3 right defensive end. The tackles are a left- and right tackle who both had to do multiple things so they work well. Kevin Greene spent a couple of years as a 4-3 OLBer and he did fine, but his forte was as a LOLBer in a 3-4 defense. It was there he earned his Hall of Fame credentials. The safeties couldn't be better.

Again, two left tackles, though when Zimmerman first arrived in Denver he did play some right tackle and did just fine. It's a great offensive line who could run lots of traps that fullback Franco Harris ran with the Steelers in the 1970s. The only criticism might be lack of top-end speed at wide receiver. But put Sayers in the slot, see what happens. 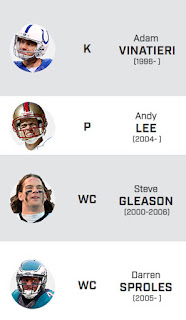 These are four fine picks. Maybe not all are G.O.A.T.s but Vinatieri is a clutch kicker, Lee is in the Hekker-class as a net punter, Sproles is a fine returner and Gleason was an excellent core special teams player.  Outside my own team, I like King's best.