Here is a list of the top 10 kickers that played in the first twenty-five years of the NFL (1920-1944). Since the NFL didn’t start until 1920 this list won’t include some pre-NFL stalwarts like Jim Thorpe, Charlie Brickley, Frank Nesser, etc., who had their prime years of kicking before 1920.

The list ranks the kickers for production, consistency, post-season performance post-1933) and accuracy. Although scoring was taken into consideration, touchdowns are included in that stat, it wasn’t the most important criteria.

In 1938 Kercheval led the NFL in field goals made with 5.

The following year (1939) he led the NFL in FG accuracy, making 6 of 13 (46 percent). He might be higher on the list if he was a little more accurate but the Dodgers simply didn’t score as much as the other teams in the NFL.
In his first four seasons in Brooklyn, the Dodgers averaged just 7 points a game- compared to the Chicago Bears who scored around 18 points per game.
9) Glenn Presnell (1931-1933 Portsmouth Spartans; 1934-1936 Detroit Lions) Presnell, just like Kercheval, didn’t have as many opportunities (mainly because of the presence of teammate Dutch Clark), but was a very consistent place kicker. Presnell led the NFL in scoring in 1933 (although Clark missed the season coaching basketball) and in 1934 he set an NFL record with a 54-yard field goal, a mark that was not broken until 1953 by Bert Richichar. 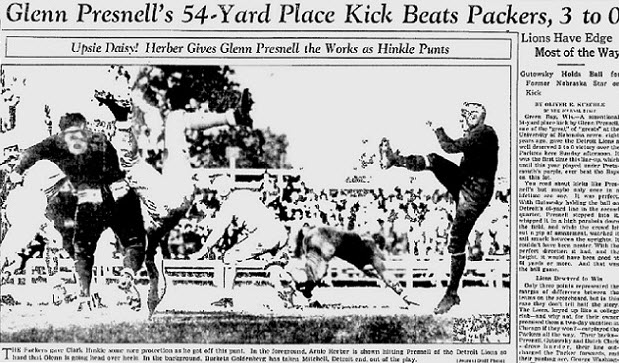 In 3 playoff games Hutson was a perfect 4 for 4 in extra points.

Hutson made just 7 of 17 career field goals. The two future Hall of Famers worked perfectly together to be number ten on the list.