There is no doubt Dan Fouts got the pick of the litter in kickers and punters. he took Ray Guy in the first round and a few round later too Jan Stenerud.

Fouts picked two free safeties but both were great. His corners were excellent, both Hall of Famers. He picked a true middle linebacker, a true strong side linebacker (Wilcox) and a true weakside linebacker (Jackson).  He also picked a left and right defensive end. With Johnson and Kinard it's hard to tell, but Johnson was a rush tackle who was very productive. It actually is a very interesting team. Green and Dean are a bit undersized but they could play. Green was a truly underrated player. Caught in a decade with a lot of good defensive ends.

All of this works except for Bruce Matthews at left tackle. he played some right tackle early in his career but was moved inside. Once, he was moved to left tackle to match up against Bruce Smith. Smith lit Matthews up for 4 sacks and Matthews again moved back inside, where he was dominant. So, I am not a fan of him at tackle, to say the least. 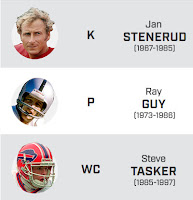 There are no criticisms in the special teams other than where they were drafted. All have a legitimate argument for bing G.O.A.T.s.
Posted by John Turney at 4:52 PM