Kickers with the Best Kickoff Legs 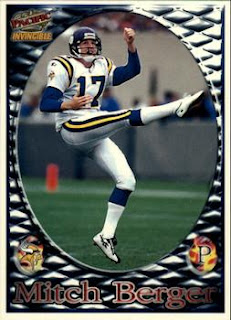 Starting in 1991 the NFL compiled complete kickoff data and has continued ever since.  However, over that time the kickoff rules have not been consistent. In 1994 there were kicking game changes.  he NF. moved the kickoff line back to the 30 to generate more returns. Also, a lower kicking tee was required. Then, in 2011 the kickoffs were moved back to the 30 and in 2016 touchbacks were placed at the 25-yard line, rather than the twenty.

Because of all this, it's very difficult to compare kickoffs over the last 25 years. touchback percentages will be vastly different from 1994 through 2010.  However, kickoff distance remained fairly constant, In 1992 the average was just over 60 yards and it peaked in 2011 at 65 and has dropped to about 64.5. Rather than rule changes, this seems to fit the pattern of players training year-round and the evolution of the game.

Here are the players with the highest kickoff average since 1991 (Three of the top four are punters): 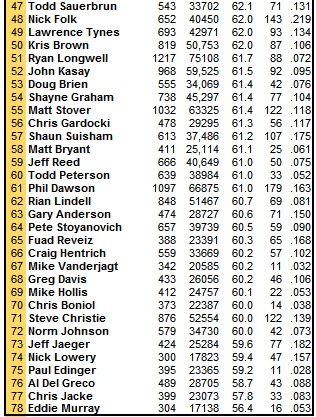 Note: Many of these players began their careers prior to 1991 and data is not available for previous seasons.

Update: Thanks to PFRA member Tod Maher the above lists have been updated. Unbeknownst to me, the data I was using (from NFL.com) has not been updated with the lastest data. Apparently, touchback yardage had been treated differently by different crews in the early days of these statistics. The NFL went back and made the numbers more uniform one their own internal website but never updated the public website, NFL.com.

The changes were slight and the kickers that made the most touchbacks were affected the most, but the largest changes appear to be no more than a half-yard.
Posted by John Turney at 6:43 PM