Jan Stenerud—The Rest of the Story

LOOKING BACK
By John Turney
Earlier we looked at Morten Andersen's  career kickoff statistics and through research surmised that he was the best kickoff artist in the NFL for the 1974-93 era, which was the era of kickoffs being from the 35-yard line. Prior to 1974 they were at the 40 and in 1994 they moved to the 30-yard line. (And were moved to the 35 again in 2011). Anderson also was top-notch after the 1994 rule change but wasn't the top kickoff man in the game, that honor for those first several years of the 30-yard line mark was likely Brad Daluiso.

When Stenerud was inducted the argument was that Stenerud, for his time, was a weapon, a player who was enough above average so was to warrant the Hall of Fame. By and large, that is true and holds up to this day.  Stenerud was a five time First-team All-Pro selections plus had two more Second-team All-Pro picks plus six Pro Bowls and an addition Second-team All-NFC selection in 1981 gives him nine seasons of "honors".

At the time of his retirement in 1985, Stenerud ranked 14th in field goal percentage among qualifiers however quite a few ahead of him were newcomers, players who were part of a new generation of kickers that for whatever reason were more accurate than those of the 1970s and 1960s.

However, at one point Stenerud himself was one of the newbies who flew to the top of the field goal percentage chart the moment he hit the number needed to qualify. 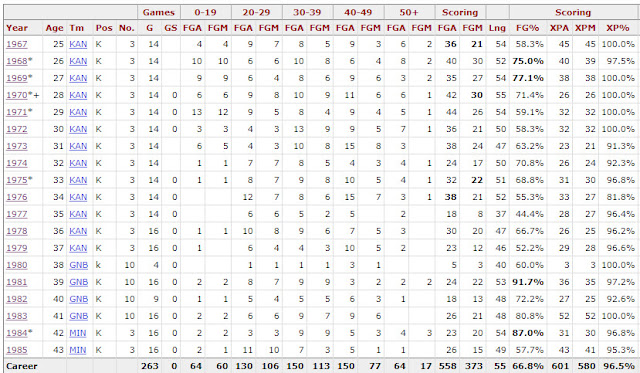 And like we did with Andersen, here are the estimated kickoffs that were touchbacks: 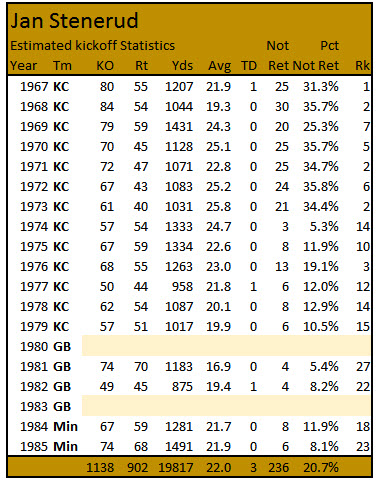 As can be seen Stenerud was one of the top kickers for having kickoffs not returned (presumed touchbacks). He was tops as a rookie and was usually in the top five through 1973.

However, when the line was moved back five yards he was only in the top five one more time (1976 when he was 3rd). After leaving Kansas City he was usually in the bottom third, but at that time he was in his early forties so it's completely understandable.

He and Morten Andersen give the Hall of Fame voters a good baseline to compare kickers who have Hall of Fame aspirations.
Posted by John Turney at 2:09 PM