Gosselin, like myself wanted to field a team that could play at positions they were familiar with. In my own critique, I showed how a failed in a couple of instances. Here, it seems Gosselin did as well. He picked awesome linebackers, but both the outside 'backers were left linebackers. Ham was tremendous at coverage and sometimes get's called a weak side backer, but wasn't. Paul Zimmerman picked Ham as his weakside 'backer for SI's All-Century team and here, Gosselin puts him there as well. It is so pervasive that one time Jack Youngblood told Ham, "Well, you were a right side backer, you didn't have the tight end over you". Ham replied, "No, Jack, Andy (Russell) was on the right, I was on the left." Youngblood persisted and said "No, you were the weakside guy". Ham, again said "No, Jack, I was on the strong side". Youngblood now relates how dumb he felt arguing with the one man who KNEW the exact answer. "I just couldn't get over how a guy that small could be a left linebacker".

Regardless, Ham projects well to the weakside and could do it with ease.

Gosselin also calls Lipscomb his power tackle. But in my viewing of Lipscomb with the Colts he was a sideline to sideline tackle and with the Steelers he was an up-the-field type. In neither place was he taking on a guard and playing like, say a Merlin Olsen or Joe Greene. However, his size would allow him to take on that role and work with one of the two best pass rushing defensive tackles ever in John Randle.

Gosselin also chose two left defensive ends. Jones was a Ram mainstay at left end and Neil Smith was a truly fine left end for the Chiefs. Jones, though could have been a dominant right end as well. Emlen Tunnell was a left safety, what would roughly translate as a strong safety and Easley was a strong safety, but either one of them could have moved to right or free safety since both were superior athletes.

The offense works well and even has a running back who played fullback (Roger Craig) as a lead blocker. Michael Irvin is a true "X" split end and Lance Alworth was a true flanker (Z). Gosselin also nailed the line in their places with true left and right tackles and left and right guards. With his quarterback and these skill players, Gosselin may have won the SI MMQB draft. 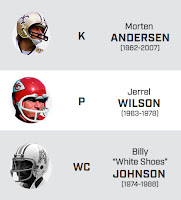 The kicker and returner are top-notch. I am not a fan of Jerrell Wilson. But I can see why others love him, he got lots of honors, even was voted the top punter of the AFL. But in doing research he not only had a lot of punts blocked (12) he didn't have a tremendous net punting averages year-in and year-out. He seemed to used his powerful leg to kick beyond the coverage in too many seasons. However, he did have two seasons in which he led AFL in net punting (1964 and 1968) and one (1968) in which he had a 40.3 net.
Posted by John Turney at 4:34 PM