BILLY HOWTON: Throw It and I'll Catch It 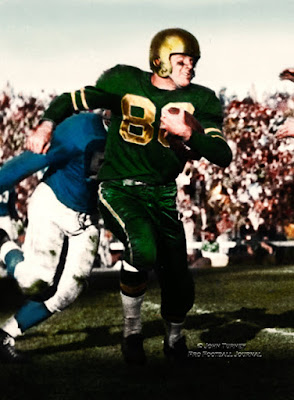 The Green Bay Packers lost their last seven games of 1951 as their ground attack struggled all season. The Packers did, however, set a new record for passes attempted in a season with 478. Bobby Thomason and Tobin Rote shared the quarterback position and both had some strong games pitching the pigskin.

Historically the NFL draft of 1952 has been discussed as one of the most talented ever. Fourteen men will be taken in the draft before Green Bay selects a tall, lean, and swift split end named Billy Howton. Five of those previous fourteen are in the Hall of Fame. Howton is not, yet his saga needs to be shared.

Howton's rookie season is one that ranks among the best ever by any receiver before the 1970 AFL-NFL merger. In the first nine games of the year he has caught at least one pass in every game, but the last three games of the season he runs routes and catches passes to the tune of 21 receptions for 485 yards, and 5 touchdowns.

This kind of production compares with the immortal Don Hutson! Billy receives first team All-Pro recognition. Expectations are high for 1953 as the Packers were in the thick of the Western Conference race till late in the 1952 season, but Howton has a chest injury that keeps him out of the lineup for the first four games. Though he plays well during the latter half of 1953 and contributes in 1954 the Packers struggle to win games. 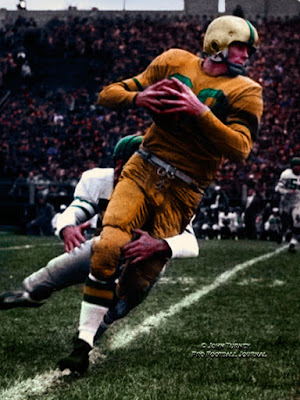 Green Bay opens the 1955 season at home against a Detroit Lions team that has beaten them 11 straight times and outscored them 363 to 191. The hard-hitting affair against the three time western conference champion has come down to the 4th quarter with Detroit leading 17-13. Earlier in the game after a fine catch, Howten is hit hard and coughs up the ball. Middle linebacker Joe Schmidt of the Lions scoops up the ball and is pictured on the cover of my book "The Birth of Football's Modern 4-3 Defense: The Seven Seasons That Changed the NFL" returning the ball 17 yards.

Tobin Rote keys the final drive of the game with some timely completions, and a 28-yard dash up the middle. Time is running short when Rote throws to Howton on a stop route. Billy is running for the sideline but realizes he is going to be tackled in bounds and fumbles the ball on purpose out of bounds. This photo is captured in Mickey Herskowitz excellent book "The Golden Age of Pro Football".

The clock is now stopped with just 25 seconds left. Rote drops back and finds Gary Knafelc open on a quick post for 18 yards and the winning touchdown. Green Bay has a record of 1-2 as they take on the 1955 defending western conference champion Rams in Milwaukee. Howton has one of the greatest performances by a receiver ever in this game. During the first half, he snags 6 passes for 204 yards. Green Bay upsets the Rams 42-17. November the 4th the defending league champion Browns take on the Packers in Milwaukee. No team is as well prepared to take on an opponent as a Paul Brown team and film study details this aspect. Green Bay is knocking on the door to the end zone as left linebacker Chuck Noll "walks" off to align in front of Billy to disrupt his route, yet Howton's quickness gets him off the line. Howton splits the two Cleveland safeties and scores on a curl route for the only Packer touchdown in the game.

Green Bay travels to Wrigley Field to take on their long time rivals in navy blue & burnt orange. Late in the 4th quarter rookie Bart Starr is at quarterback and he lofts a beautiful pass up the right sideline over pro bowl left corner J.C. Caroline for 53 yards to Howton. Green Bay and the league manuals still have this incorrect as Starr is listed with a passing long of 36 for the year. Howton's excellent performance during the year brings him unanimous All-Pro recognition.

Green Bay has a new stadium for 1957 and early in the 4th quarter, the Packers have excellent field position on the Chicago forty-nine yard line. Babe Parilli fires to Billy for 41 yards to set up the game winning touchdown pass to Gary Knafelc. The Baltimore Colts are truly contenders for the Western Conference crown in 1957 and are at home against a Packer team that has now lost three straight. Late in the 4th quarter trailing 21-17 strong armed Babe Parilli comes off the bench and heaves a long pass up the right sideline as Billy has easily run by reserve left corner Henry Moore. The pass is on the money for 77 yards and the game winning score.

From this point on the Packers will stumble to the depths of their history as they go 2-16-1 for the remainder of 1957 and 1958. There are teams that bring out the best in a player, and for Howton, that team is the Rams. How many receivers historically have caught at least 47 passes for a minimum of 1,185 yards against an opponent the first ten times they face them?

Vince Lombardi needs help revitalizing the roster as he begins his tenure in Green Bay; thus on April 24, 1959, Howton is traded to Cleveland for Lew Carpenter and Bill Quinlan. Billy Howton played outstanding and consistent football for the Packers as he caught a pass all but three games during his time in Green Bay. A new chapter, but a very short one as Howton plays just one year for Paul Brown, yet it is the only winning team he plays on. 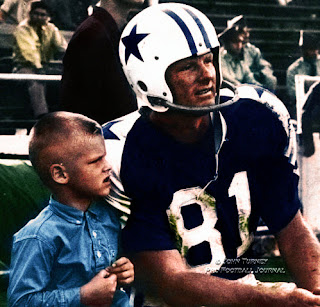 He is too talented to be let go in the expansion draft but is traded to Dallas on September 6th for a conditional draft pick. Howton is back in Texas where he played college football, but he is going to see many a player come and go as Tom Landry attempts to put a quality team on the field. Billy is not very productive for the most part in the '60 season, yet finishes strong with 12 catches for 162 yards and 2 scores over the last two games of the year. Dallas wins on opening day in 1961 and Howton is a key contributor in the first Cowboy victory with 6 catches for 138 yards. Later in the season against the defending league champion Eagles, he latches onto 11 passes as he torments the Philadelphia secondary with the variety of moves he has come to be known for. Though he still has some quickness, he has lost some of his swiftness—yet Billy can run every route.

Film study shows he can run an out route, the deep fade, the post/corner (Q), and the curl route well, yet he runs the slant to perfection. The last day of the 1962 season Dallas is again on the losing side; this time to the eastern conference champion Giants, but Billy is still the wily veteran as he catches 3 passes for 108 yards and 2 touchdowns. He has now caught 470 passes for 7,945 yards, and 58 touchdowns in his career, and is fast approaching breaking Don Hutson's records for catches and yardage.

The issue though going into 1963 is the Baltimore Colts have an excellent receiver named Raymond Berry who with 419 catches for 6,217 yards is just 30 years old and looks to have a few more seasons with Mr. John Unitas. Yes, Howton does break Hutson's records, but as most know Berry soon passes Howton. Billy has his moments in the final campaign of his career. November the 10th against San Francisco he catches 8 passes for 107 yards, and his last touchdown, and you guessed it the final TD comes on a slant pattern. Though he will likely never be in the Hall of Fame Billy Howton is one fine receiver that should never be forgotten.
Posted by TJ Troup at 1:55 PM