Joe Horrigan MMQB All-Time Draft Team is up next.

The safeties work here as a strong and free safety. Joe chose a 3-4 defense but only Bennett has experience in it, but it would be interesting to see Dave Robinson as a blind side rusher in a 3-4. He was a great athlete and could pull it off. As a nose tackle Ray Childress would struggle. He was a 3-4 end and a left defensive tackle in nickel situations until the Oilers moved to a 4-3 where he was a left tackle. Jack Youngblood played in a 3-4 in 1983 and in 1984 and did well, the Rams stopped the run and Youngblood amassed 20 sacks in those two years. So, he can play it. He'd cuss you for doing it, but he'd play the 3-4. Andy Robustelli, at 230 pounds, would likely struggle in a 3-4. Horrigan chose a fourth lineman as his wildcard selection. Ernie Stautner would likely have to play a lot meaning one of the linebackers would have to sit. The question is who?

This is a well-fitted offense and with Jim Taylor and Emmitt Smith, Horrigan could run every offensive set. 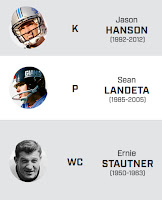 The kicker and punter are fine choices. Hanson did have an advantage in kicking indoors, but that's the nature of the game.
Posted by John Turney at 5:09 PM