After looking at my own team and it's oddities I will take a look at the other 11 teams on the MMQB All-Time Draft Team project.

Joel picked two right defensive ends, neither really projects as a strong-side end but both were very good, Smith being, in our view, on of the top five All-Time. Randy White and Warren Sapp are both up-the-field rush tackles, neither a "shade" or nose type so if Bussert wanted to play odd-man fronts White and Sapp would have to play over a center and that was not their forte.

Lawrence Taylor was taken #1 overall but was put into a 4-3 defense. Perhaps that is not the best use of his skills. Hanburger was a right linebacker but here he'd have to project to cover a tight end something that he would not have done as much as the left linebackers of his day.

Jack Butler was a fine corner but his true greatness was as a right safety rather than defensive halfback. The safeties are ideal with Houston a strong safety and Wood a fine free or right safety.

Forrest Gregg would have to be moved to left tackle, but he's someone who could project there and do well. He was a top-notch pass protector who had "left tackle feet" if you will. Bussert would be able to run all backfield formations with a true fullback in Csonka. 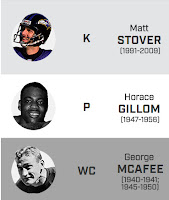 These are all great choices, all well above the league averages at their positions during their career.
Posted by John Turney at 4:09 PM